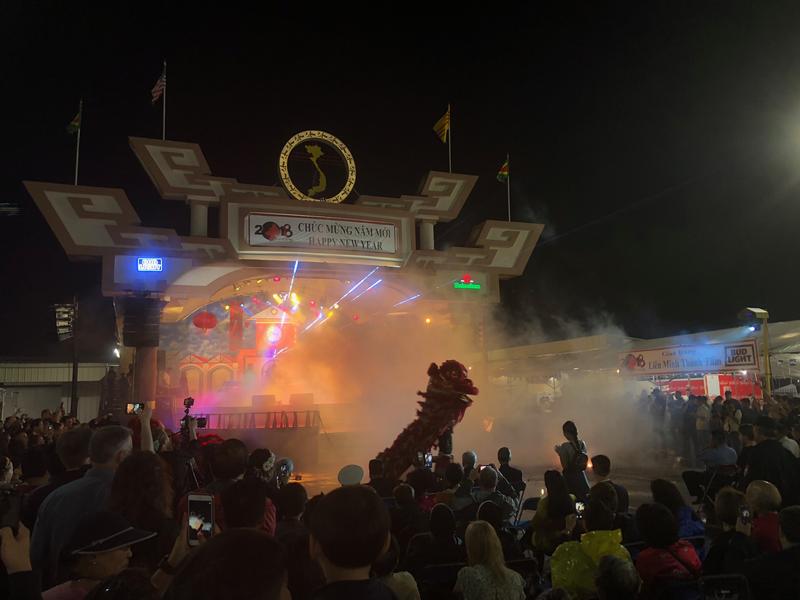 You’ve probably heard of the James Beard Award-winning Duong Phuong Bakery out in New Orleans East, whether or not you actually got to taste their coveted king cake. But today, high school students from Metairie Park Country Day take over TriPod to go beyond Duong Phong and explore the larger Vietnamese community in the East.

Tet is the Vietnamese New Year, and there’s a weekend long festival with food, music, dancing, and some of the loudest fireworks you’ll ever hear.

Tet was our introduction to the New Orleans Vietnamese community in New Orleans East. Believe it or not, before this experience, we didn’t know this community existed.

Yeah, one of us, Halley Phan, is Vietnamese and just moved here from Vietnam last year. Even she didn’t know about the community. To be honest, our teacher told us about it.

This made us really curious to learn more about this population, the roughly 20,000 Vietnamese people who live in New Orleans: when and why they left Vietnam, why they came here, and what their lives are like now. 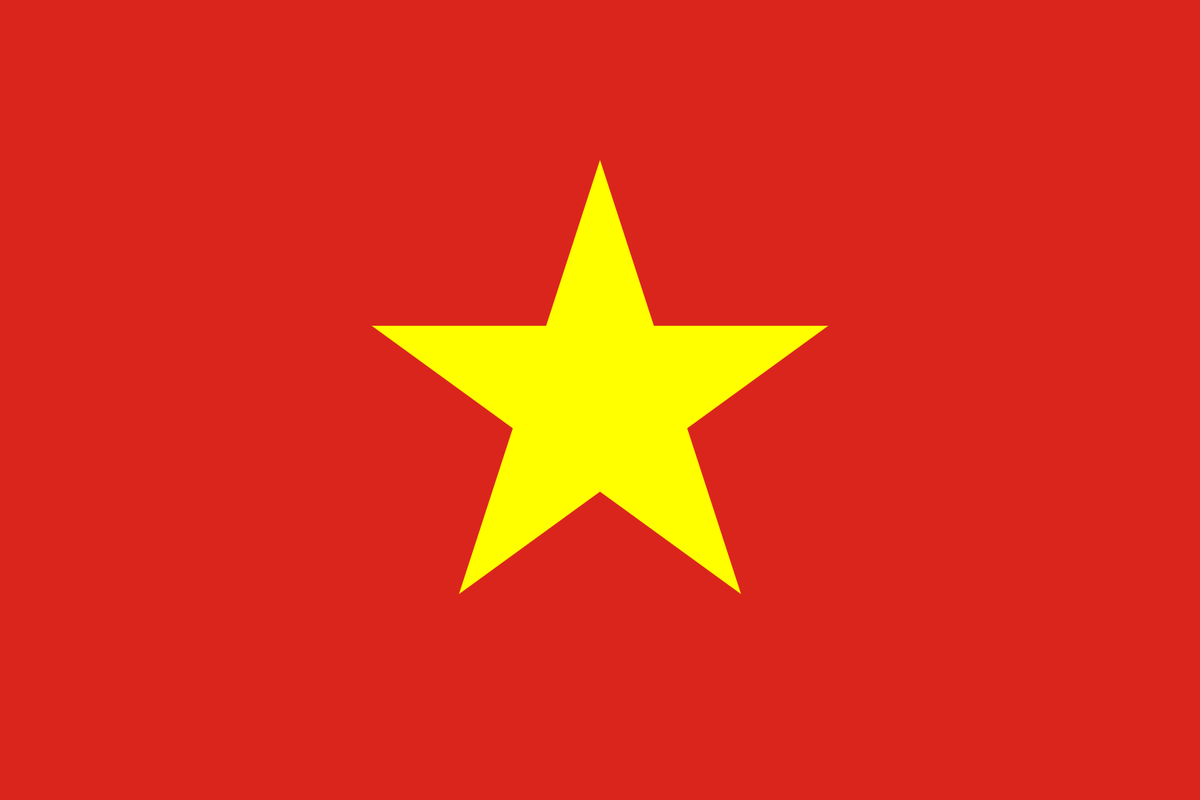 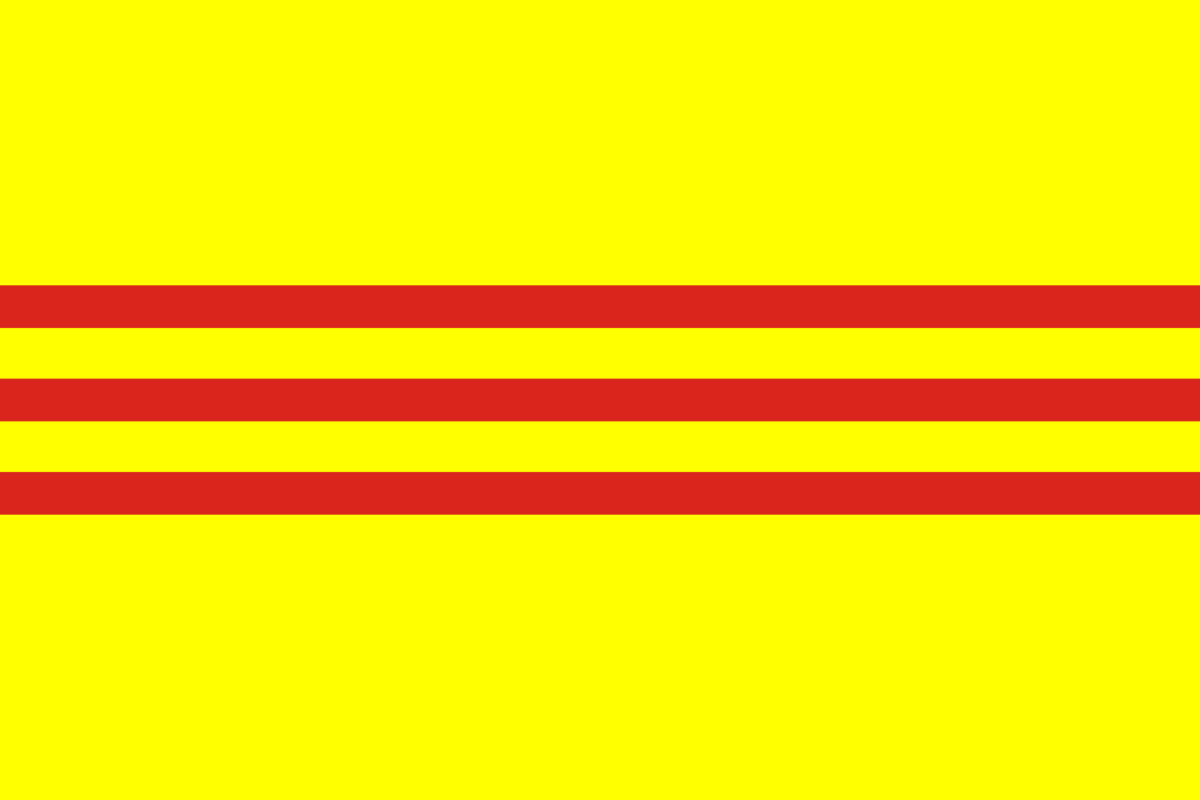 Since starting the story, we now know that the Vietnamese community traces back to the Vietnam War. One of the people we learned from was Professor Jana Lipman, an associate professor of history at Tulane University. “The United States withdrew their troops in 1973,” Professor Lipman told us. She says the Vietnam war was a civil war between the Communist North and the Republic of South Vietnam. The United States defended the south but, as you probably know, the United States lost that war, and thousands of Vietnamese fled the country.

These people are the first wave of  immigrants that came after the war, and this wave included people such as Tony Tran. 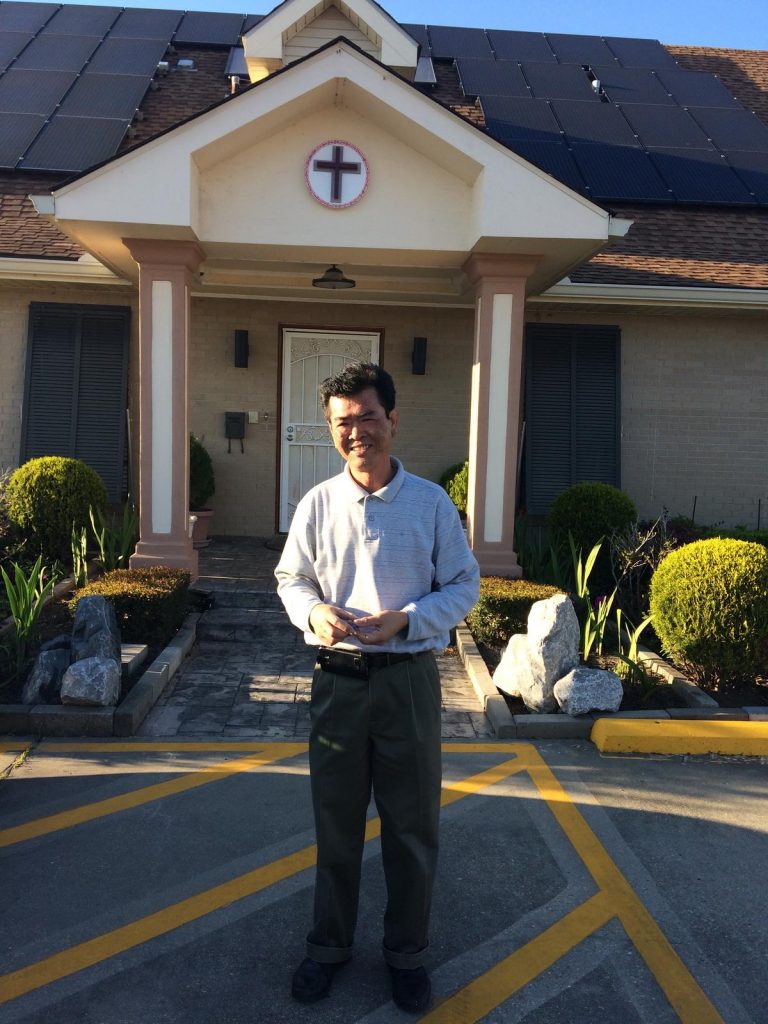 “I came like five years later,” says Tony, the coordinator at Mary Queen of Vietnam Church, in New Orleans East, which is the epicenter of the local Vietnamese community. And Tony, like many congregants of the church, is a refugee of the Vietnam War. He left the country in the ’80s. One night, after the war, the Communists (who won the war) were celebrating the capture of Saigon. So it was a holiday, and Tony says all the communist officials were partying instead of looking out for people attempting to flee the country. This was Tony’s chance.

“When the communists were at the party, they got drunk, and so I escaped the country on that very night.” He left on a raft with 11 other people in the middle of the night. This journey was just one more challenging part of a decades long conflict.

Wendy Gaudin is a history professor at Xavier University. She says the war was traumatizing. “And those migrations weren’t happy migrations, they were terrifying…and difficult migrations.”

Tony’s experience was no exception. “When I left Vietnam, I didn’t have any concept of what the United States looked like or where the Vietnamese community resides in the different part of the country.” Tony ended up in a refugee camp in Arkansas. Some cities were worried about taking in too many refugees but, Professor Lipman says, New Orleans wasn’t. “What made New Orleans different is the archbishop said we’re gonna actually relocate hundreds of families.”

Archbishop Philip M. Hannan was responsible for bringing close to 1,000 refugees from Arkansas to New Orleans. Professor Wendy Gaudin agrees that a Catholic connection brought the Vietnamese to New Orleans. “And then, of course, as you have a community of people of refugees or immigrants living in one area, that attracts others to come as well,” Professor Gaudin says. “So the community is a lot larger, obviously, and a lot more diverse.”

Vietnamese people kept coming to New Orleans because there was a large population already here. But not Tony. Tony came here to study in the seminary and originally lived uptown. “I took buses all over the city trying to find an Asian grocery store or someplace where they sell soy sauce, but I couldn’t find anything in the city of New Orleans during the 80’s.”

Then, he got into a car accident in New Orleans East.

“The driver was Vietnamese, so he got out of the car trying to beat me up,” Tony remembers. “I was thinking gosh, we have insurance, why is this man trying to beat me up, you know, physically! He tried to jump on me, and I got in my car and locked up the car waiting for the police to show up.”

So Tony’s in his car—that was just in a crash—while someone’s banging on his windows, ready for a fight. And all Tony’s thinking is, “oh my God, there’s another Vietnamese person here!”

After the crash, Tony moved to the East and became an active member of the community and the Mary Queen of Vietnam Church, a home for the Vietnamese community. The community of South Vietnamese people grew and is still around today. That’s why when Halley saw the yellow flag with red stripes, she didn’t recognize it. It’s not the flag of Vietnam today, the country she was born in.

That flag is the flag of a country that no longer exists, and the people who fly that flag, a lot of them have kids who are probably our age—first generation Vietnamese Americans. What’s it like for them to live in an immigrant community, and how does their experience differ from their parents?

Well, at Tet, we met two high school students from Benjamin Franklin High School. Mary Tran was one of them. Mary lives in two worlds: the American world of her life at Ben Franklin and her Vietnamese world with her family in New Orleans East. Her parents work hard here to make a better life for her.

“I hear from my mom constantly, ‘oh Mary, you need to work hard, so you don’t have to live like me,’” Mary says. “So that kind of burden makes me want to pursue a career that most definitely will make my life easier later on for me and my children.”

An example is having different ideas about how much time you should spend with your family. This can cause tension. Katrina feels caught between cultures. Here’s an example, a classic childhood tradition: the sleepover.

“Because you see American movies, you see sleepovers and little kids having sleepovers, having fun. I remember asking if I could go and they were like ‘no you are staying home,’ and I was like OK…no one else wants their child to go, because it’s a burden on the other kid’s parents. So we’re like, what do we do? They’re prevalent in making sure you stay home. Yeah.” 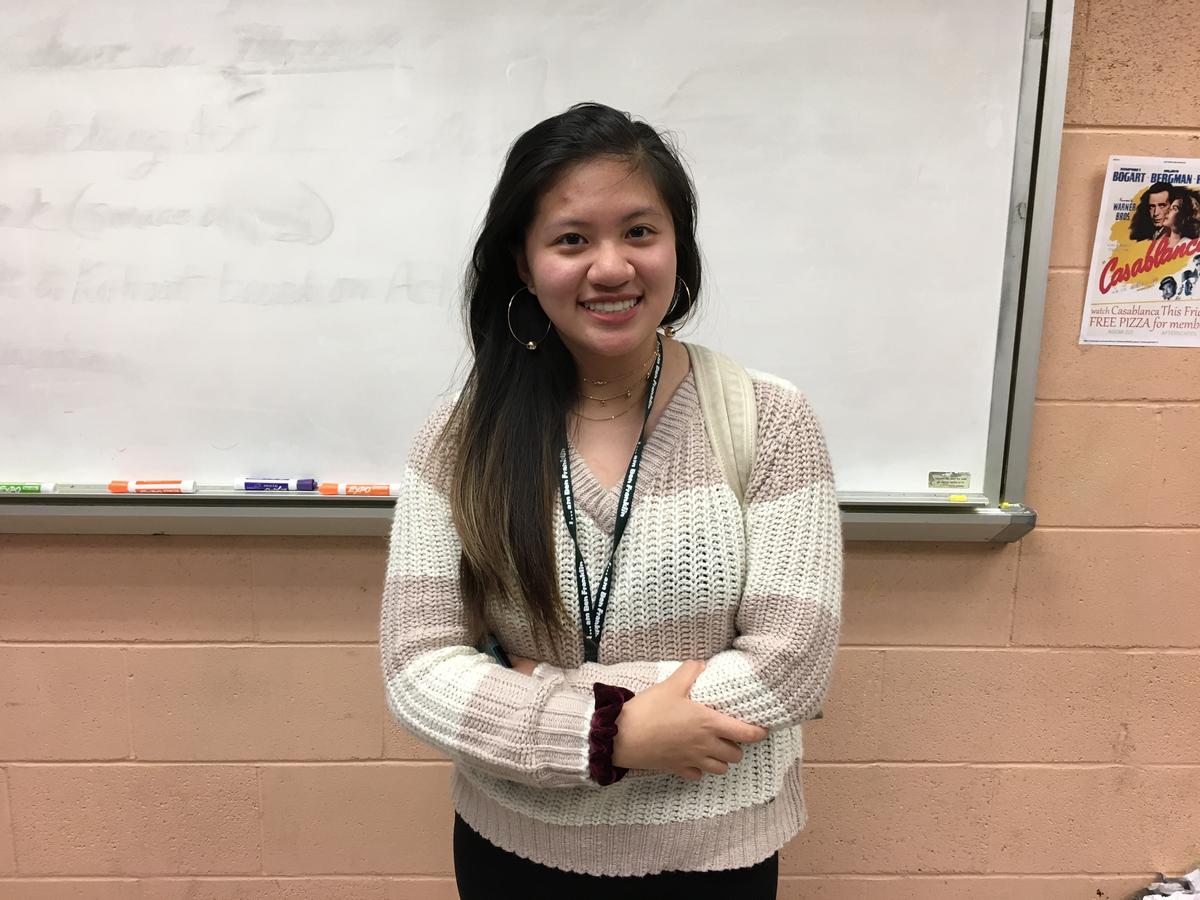 Katrina’s a senior and going to college next year. She has extended family in California and thought maybe she could go to school out there, “because then technically I’ll still be with family…so she can’t say anything about that,” she says. But her mom was reluctant.

“She told me it would be very expensive to go to a school in California, and I was like, OK, then I could get a scholarship, and she was like, OK, but who will take care of me, who will be my legal guardian over there and, again, you don’t want to put a burden on someone else. So I kind of just gave up, because it’s not worth it.”

Katrina’s going to Xavier University, which is a great school! It’s just still in New Orleans.

“Maybe this is a sign that they want me to stay home, and I should just stay home for six more years and then maybe possibly move out afterwards…we’ll see!”

There’s something else we realized, through talking to Mary. As tight knit as the Vietnamese community is, they don’t always feel seen or heard by the rest of New Orleans. Mary told us that this came up for her during Mardi Gras. People really love Dong Phuong king cakes.

“They’re really, really popular,” she says. “And I feel like the whole idea of us only being known through Dong Phuong, and not other things, is kind of sad.”

She says other than the bakery, the Vietnamese community isn’t really noticed. And important things are happening there. “There is a thing going on about Entergy building a power plant in the East. Our community has come together and protested.”

Entergy said this new gas-fired plant in New Orleans East will provide electricity to the city when storms knock out other power supplies. The Vietnamese Community argued that there are major environmental concerns that will directly impact their community. Despite this, city council approved the plant in a 6-1 vote. 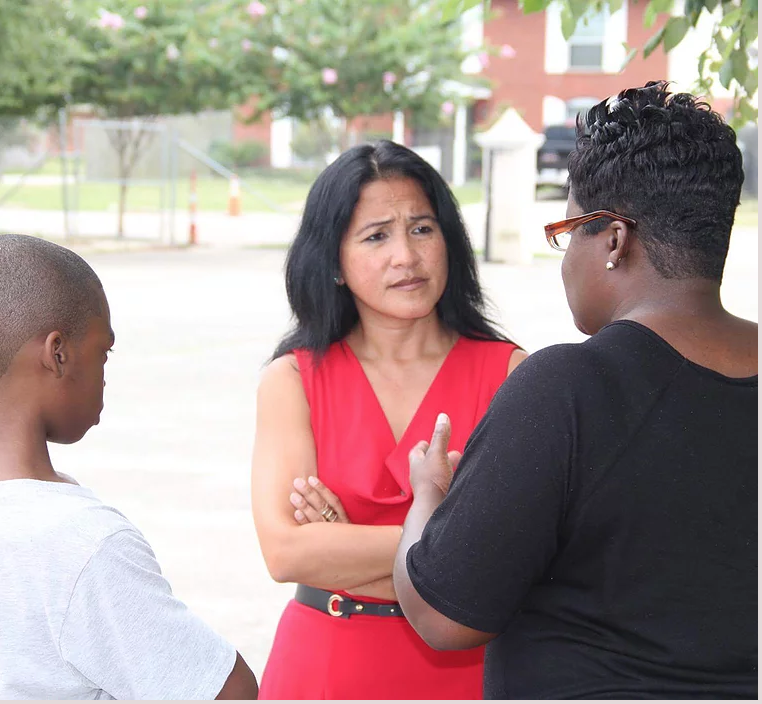 “Not having that voice in more important areas makes me a little sad,” Mary says.

That is about to change, though. This fall, Cyndi Nguyen, who came to the United States after the fall of Saigon, will be the first Vietnamese American city council member in New Orleans history.

TriPod is a production of WWNO in collaboration with the Historic New Orleans Collection and the Midlo Center for New Orleans Studies at UNO. This episode was produced by Sam Murray, Halley Phan, Kristian Brooks, John Wisdom, Seth Fawer, and Susie Ascuitto of Metairie Park Country Day.