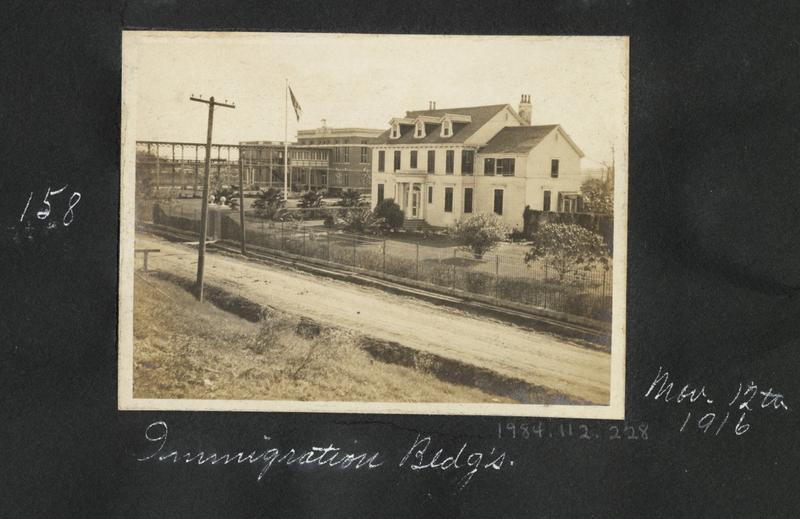 TriPod New Orleans at 300 returns with Part II of its series on Camp Algiers, an internment camp that detained Latin Americans during World War II. Listen to Part I here.

A quick refresher from where we left off: the United States has just entered World War II after the attack on Pearl Harbor. The FDR administration is anxious about additional Axis power points on the map. It sees Latin America as a potential threat, with Nazis hiding out and organizing with Hitler’s party from afar.

So White House officials reach out to Panama, Honduras, Colombia, and 15 other countries to assist in a roundup of potential Nazis. The result? More than 5,000 people, the majority of them innocent, stripped of their homes, property, jobs, and sometimes families, and deported to the United States to sit in internment camps.

Max Paul Friedman is a professor at American University and wrote a book on this topic called Nazis and Good Neighbors: The United States Campaign against the Germans of Latin America in World War II.

“Here was the creation of camps set up deliberately outside of the legal system in order to intern people suspected of subversion against whom there was very little evidence. So it was an illegal operation that wound up being counterproductive and a violation of human rights, and it was sort of swept under the rug after the war,” he says.

Part I of this story left off at the point where Camp Algiers, on New Orleans’ West Bank, became known as the camp of the innocent. That’s where the United States put deportees who were not only not Nazis, they were Jews and Hitler resistors. These detainees were relocated to the safer, more laid back conditions of Camp Algiers—separated from the Nazi sympathizers who they’d been rounded up alongside.

(Roughly 15 percent of the 5,000 internees had at one point been members of the Nazi party and were sprinkled throughout the camps.)

So who were some of these Jews who had been deported from Latin America and wound up in Camp Algiers?

Werner Kappel was one, a 19-year-old German Jewish refugee who, along with his father, had been able to escape to Panama.

“They were picked up there by FBI agents because of reports that they had been heard speaking German and therefore must be dangerous Nazis,” says Friedman.

Werner and his dad were not Nazis.

And neither was Otto Kugler, a dentist who left Germany for Honduras in 1930. When he was picked up and deported in the 1940s, all they told him was that he had spread Nazi propaganda. Friedman says Kugler hadn’t even seen any Nazi propaganda, until he was thrown into a camp in Oklahoma with guys who threatened to beat up or kill anyone who didn’t side with the Nazis.

Historic documents show that Otto watched on April 20th, which was Hitler’s birthday, as some of the Nazi sympathizer deportees paraded around singing Nazi songs and giving the Hitler salute.

Guys like Werner and Otto were eventually transferred from those camps to Camp Algiers, a Nazi-free camp.

Marilyn Miller, a Tulane historian, says internees in New Orleans had some things to occupy themselves with and were allowed to leave the camp for various outings.

“We know that they had access to a small library that had books in Spanish and English and some books in German,” she says. “They had access to some musical instruments. The residents of the camp were allowed to shop nearby. And they could even participate in Mardi Gras.”

They’d be ferried over to the department stores of Canal Street, or for a parade.

Equally as important as access to Carnival, the kids of internees were also allowed to learn. Children who lived here were permitted to go to school in Algiers: elementary and high school. One of the internees was even valedictorian of his high school.

Imagine giving your speech at graduation and then returning home to fall asleep in your bunk bed behind bars.

Internees could leave and have visitors. Harvey Strum is a professor at Sage College in Albany. He says it was members of the Jewish community who would come to the camps to offer services to the Jewish internees.

“For example, a representative of the Jewish Refugee Service in New Orleans, David Fichman, came on a regular basis, sometimes three times a week, to meet with Jewish internees,” he says.

By 1943 innocent people had been interned for almost two years. The Jewish Refugee Service contacted the National Refugee Service saying, look, we’ve got dozens of Jews locked up in New Orleans, and we’ve got to get them out.

“Well, basically the decision has been made in the spring of 1943 possibly to consider them for parolees at large,” says Strum. Jewish families in New Orleans and a bunch of other cities agreed to sponsor a Jewish refugee and take them in, until further notice. They were essentially on parole. 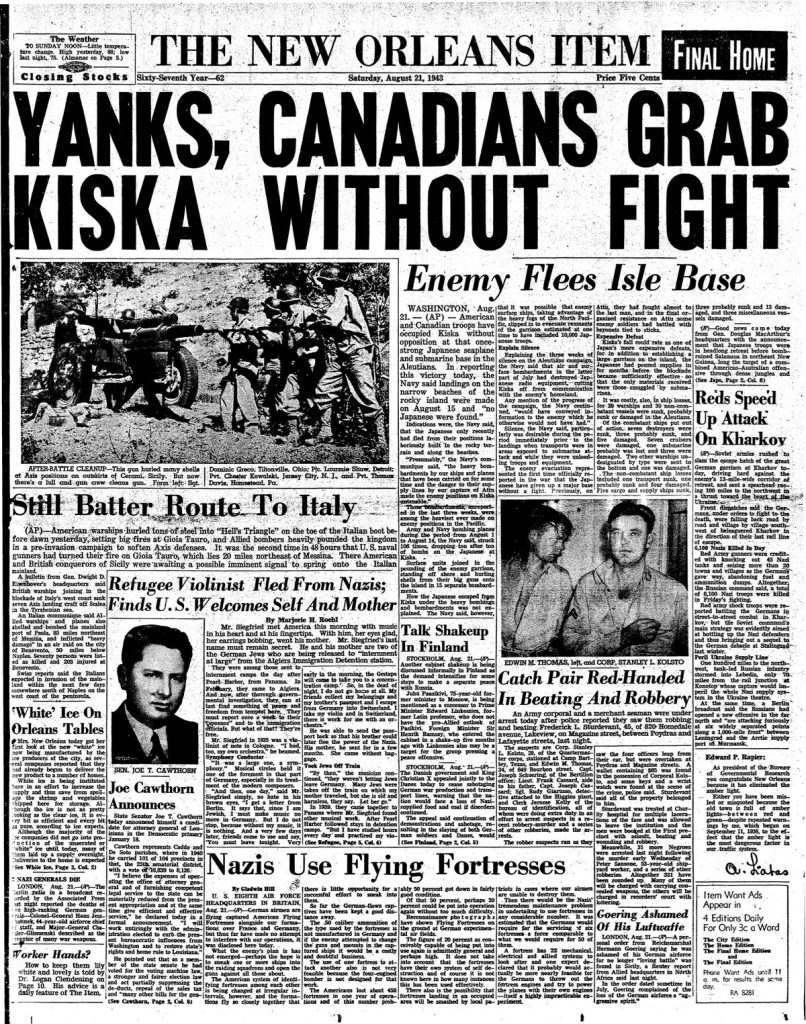 An article from August 21st, 1943, in the New Orleans Item describes a Jewish violin player and his mother being released from Camp Algiers to be internees at large.
CREDIT MARILYN MILLER

As Strum put it, they were referred to as parolees at large. This happened through a series of hearings in New Orleans, where community advocates spoke out against the detention of Jews and urged their release. 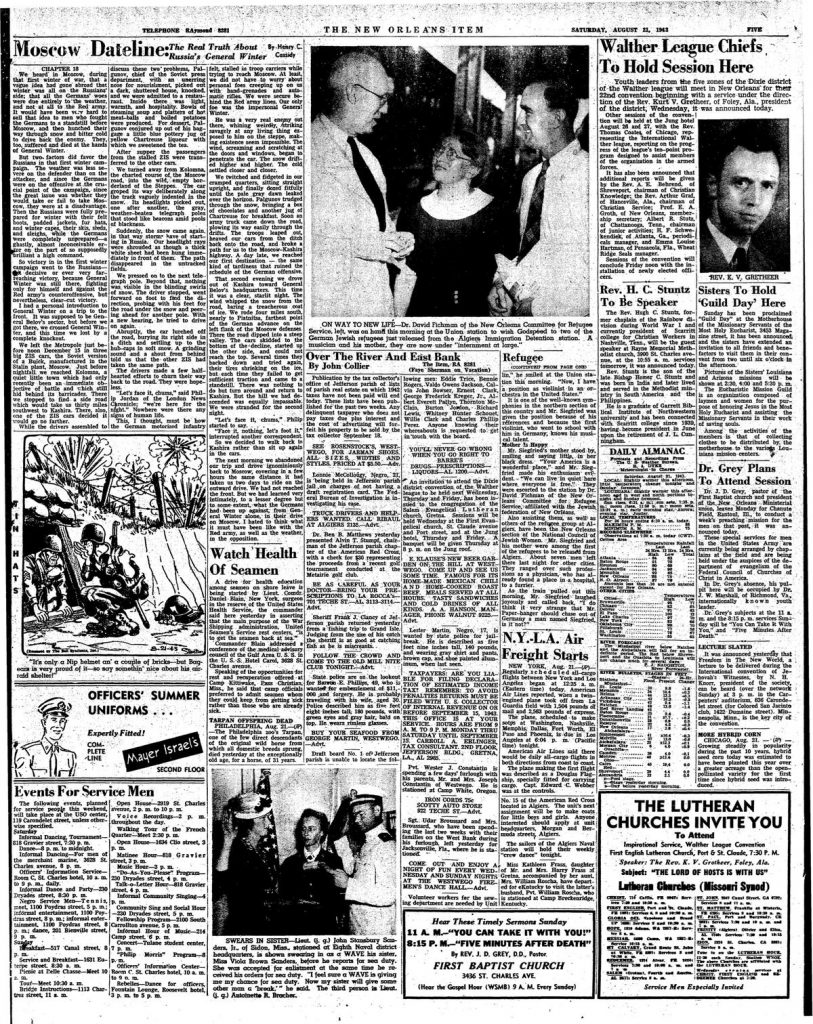 The continued article from the August 21st, 1943 edition of the New Orleans Item detailing the release of a German Jew and his mother from Camp Algiers.
CREDIT MARILYN MILLER

In 1943, most of the Jews in Algiers, with the exception of six, were released on parole. They went to Detroit, St. Louis, Cleveland, Cincinnati, Philadelphia, and New Orleans. But, Strum reminds, “they are on parole with the assumption that once the war ends, they go back to Panama or Honduras or go back to Germany for that matter.”

It was a stop-gap solution. They could leave the camps but could not go home. They were essentially on watch by an American foster family and had to report regularly to an immigration officer, a sort of parole officer.

Six Jews, however, remained at Algiers throughout the entire duration of the war. Strum explains that was “in part probably because they were single males as opposed to being families. Or because they could not find someone essentially to provide some kind of cooperation or some kind of sponsorship for them.”

This was unfortunate for these six remaining Jews, not only because they had to remain behind barbed wire for another two years, but the camp of the innocent had become less safe.

In 1944, a man named Kurt Ludecke was elected to head the internee committee at Algiers. He was not innocent; he was pro-Nazi and former adviser to Hitler. This happened because after most of the Jews were sent off to live with their sponsors, a group of pro-Nazi Germans were transferred to Algiers and elected Kurt Ludecke to head the internee committee.

This is a guy who wrote a book called I Knew Hitler, and he meant it in a bragging way. So once again, Jews and non-Jewish anti-Nazis were persecuted.

Then, a year or so after Ludecke heads the committee, the war ends. The camp gets decommissioned. But no one really knows what happens next or what to do with all these people, says Max Paul Friedman.

“The reason they couldn’t be released initially is that U.S. officials couldn’t agree that it would be OK to release them. They didn’t want to send them back to their homes in Latin America, because they had put a great deal of pressure on Latin American governments to expel them in the first place. It’s like telling Costa Ricans, if you don’t hand over these Germans, we’ll stop buying coffee and sugar,” he says.

Friedman says returning those people after that behavior, saying oh, actually these people are not dangerous—would have undermined U.S. credibility. And, he adds, there was another problem.

“They didn’t want to release them into the United States itself, because they had entered illegally.”

This wasn’t their fault, considering they were essentially kidnapped. And now the United States was like, oh yeah, what we did was pretty illegal.

“There was no legal basis for kidnapping people in other countries, bringing them to the United States, and locking them up,” Friedman says. “There are no laws that say you can do that; in fact, there are laws that forbid it.”

Fewer than 1,000 internees stayed in the United States after the war. Most of them wanted to return to Latin America and were ultimately able to, says Friedman, “where they typically found that their property was gone, and they had to start from scratch and sometimes had to start a legal process to try to recover what was lost.”

In his article on this subject, Harvey Strum wrote: “Only Franz Kafka could have created a tale of German Jews being arrested as pro-Nazi enemy aliens and then being sent to the United States for internment with real Nazi Sympathizers.”

But, he says, this bizarre and failed operation was a preview for more recent missteps that, according to him, our country shouldn’t be proud to recount.

“To do a parallel with the Syrian refugees, it’s essentially like making the assumption that every Syrian is a terrorist, you know, making assumptions not based on fact but based on prejudice and biases,” Strum says.

Max Paul Friedman says there are a lot of relevant questions that come out of this WWII-era story that we as a nation need to ask ourselves.

“What is the balance between civil liberties and national security, and does it require violating the former in order to ensure the latter?” He asks. “And this story seems to suggest that it would have been much more effective to look for guilt in individual acts than group identity, and that’s a lesson important for our own time.”

TriPod is a production of WWNO, with support from the Historic New Orleans Collection and the Midlo Center for New Orleans Studies.