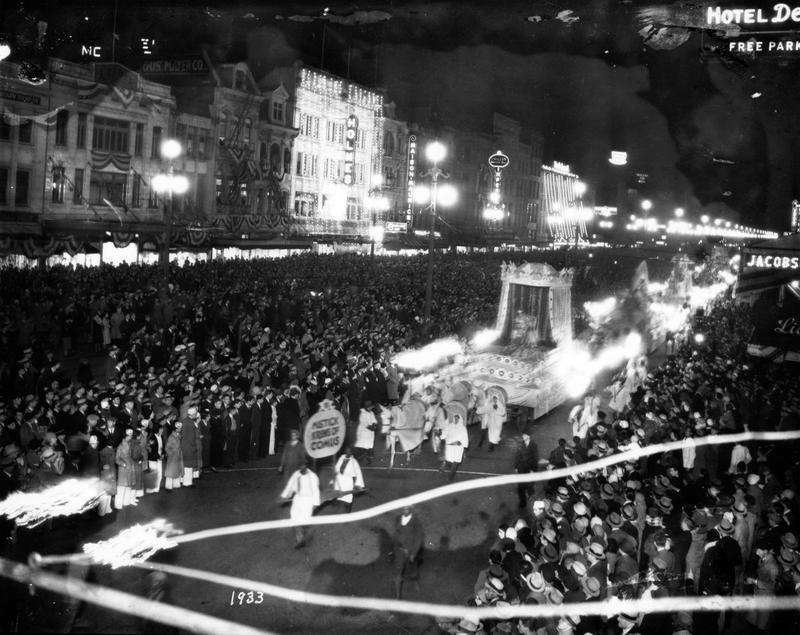 TriPod: New Orleans at 300 returns with a retrospective look at Mardi Gras and the year that Carnival took place in the dark. Hear the TriPod Xtras extended interview with Rien Fertel.

Right now, you might not be itching for Mardi Gras, since it just happened and everything, but imagine what it will feel like six months from now when you haven’t caught any beads, or a shoe, or a light-up clicky thing, and still have another six months to go. It can be rough.

Eddie Smith is a flambeau carrier who’s been toting, as he calls it, for over 20 years. I talked to him at the staging grounds before Muses. He told me that when Mardi Gras is over, he gets disappointed.

Flambeau carriers have been part of Mardi Gras history since the 19th century. They carry tall, metal, candelabra-like torches fueled with kerosene that light the night parades. It’s basically like holding a street lamp over your head, a flaming street lamp. 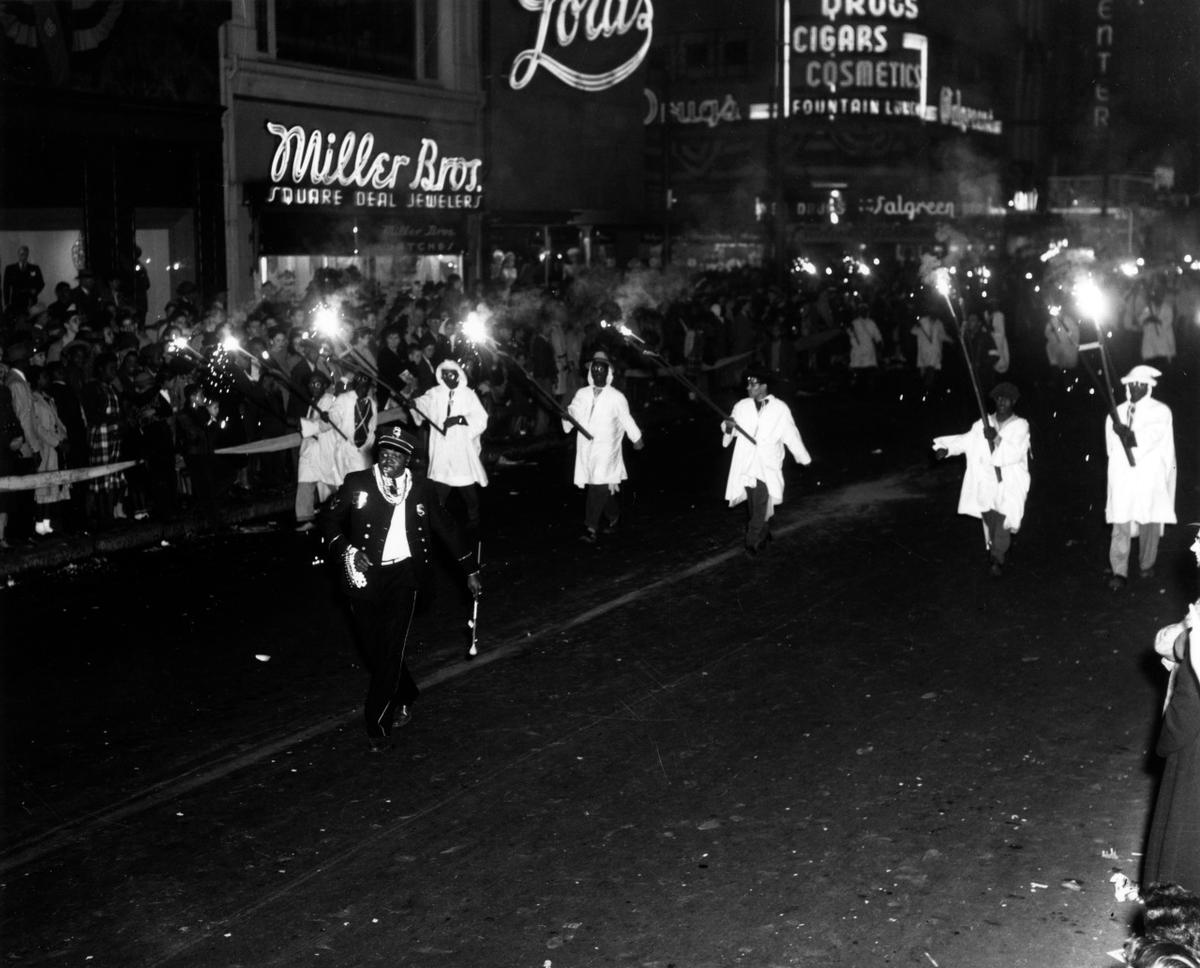 It can be hot, exhausting work, but Eddie’s all about it. “I’m just like, man why does Mardi Gras got to be over so fast? Why can’t it keep going and going and going?”

Eddie’s not alone here; at least one of you listening right now is still in post Mardi Gras mourning. So now, imagine not one, but four whole years without Mardi Gras.

“I could not imagine four years without Mardi Gras,” said Rien Fertel, a writer and teacher living in New Orleans. “The papers of the period leading up to Mardi Gras 1946 described the city as very mirth starved and famished for the pomp and pageantry of Mardi Gras, and I don’t doubt it.”

1946 was a year after World War II ended. After four long years of no Mardi Gras, it was finally back.

Rien imagines that four years must have felt like a very long time and, on top of that, “a central component of Mardi Gras disappears from the streets. And that is the flambeau carriers.”

When the flambeaux disappeared, the parades rolled in the dark.

Rien wrote an article about flambeau carriers that came out in the March 2017 issue of Oxford American. “The flambeau carriers, African-American men historically, carry these cross-shaped wooden sticks. At the top of these wooden sticks is a big pot or can of kerosene, two gallons of the stuff. Altogether it weighs about 70 pounds. And they carry these cross-shaped torches to light the streets for the parades.”

If you’ve been to a parade on St. Charles Avenue, you know what Rien’s talking about. The flambeaux still twirl their torches for a number of Carnival krewes, but their role originated out of an actual need for light. In the 19th Century (before electricity), the flambeaux served a functional purpose, to literally light the parades, so crowds could see the floats and the royalty riding on them. The first carriers were enslaved men and free men of color.

Back to the 20th century: Before WWII, carriers were paid $2.00 per parade plus tips—whatever parade watchers tossed their way as they danced down the street. Then the war started, and Mardi Gras was put on hold until the war ended.

Then 1946 rolled around. Rien told me, “the flambeau carriers go to the Mardi Gras den, where the floats and other instruments of Mardi Gras are kept, and they ask for higher pay.”

The carriers asked for more than twice their pre-war wages: $5.00 per parade.

“Right after the Second World War, African Americans had been in the military,” said Carolyn Kolb, scholar of New Orleans history. “They knew what they had done for their country, and they didn’t want to be treated badly when they got back.” Carolyn thinks that this what may have caused the flambeaux to ask for higher wages.

They asked for $5.00 a pop, the krewes came back with an offer of $2.50, the flambeaux held their ground and insisted on $5.00, and the krewes wouldn’t budge either.  A spokesman for the major Carnival organizations told the New Orleans Item, “our position is going to remain unalterable. The increase we have offered is all that we are going to offer. We anticipate no trouble in getting along without them.”

“And so they strike,” Rien said.

This left the Krewe of Momus without lights. The Louisiana Weekly reported, “Momus, god of mockery and rebuke, got a rebuke.”

So the krewes that rolled after Momus, such as Comus and Proteus, scrambled for a backup plan. Their solution: find replacement carriers, scabs, to march in place of the flambeaux. So the krewes turned to African-American veterans of WWII and asked them to step in. In a front page article in the Times-Picayune, krewe captains addressed African-American veterans saying that they should volunteer their services once again, this time on the frontlines of the parade, so that the city could benefit from Carnival just like it did before the war.

Rien said they invoked patriotic duty. “‘For the good of the country,’ you know it’s for the good of Mardi Gras, so please take this lower pay rate and come march as flambeaux.”

And I wanted to make sure, so I asked him, “do you know if the appeal to veterans was specifically to African-American veterans?”

“Yeah, yeah, yeah,” he said. “The Picayune and the State’s Item talk about appealing to black veterans to pick up the flambeaux, to take the torch, to do it for America. And these veterans frankly found this disgusting and didn’t scab.”

So Momus and Comus and other krewes marched without lights.

I asked Carolyn about coverage of the strike in the local newspapers, and she said, “the biggest report that happened in the newspaper was on the front page of the New Orleans Item. The Item was the only unionized paper there ever was in the city, and they covered that strike.” 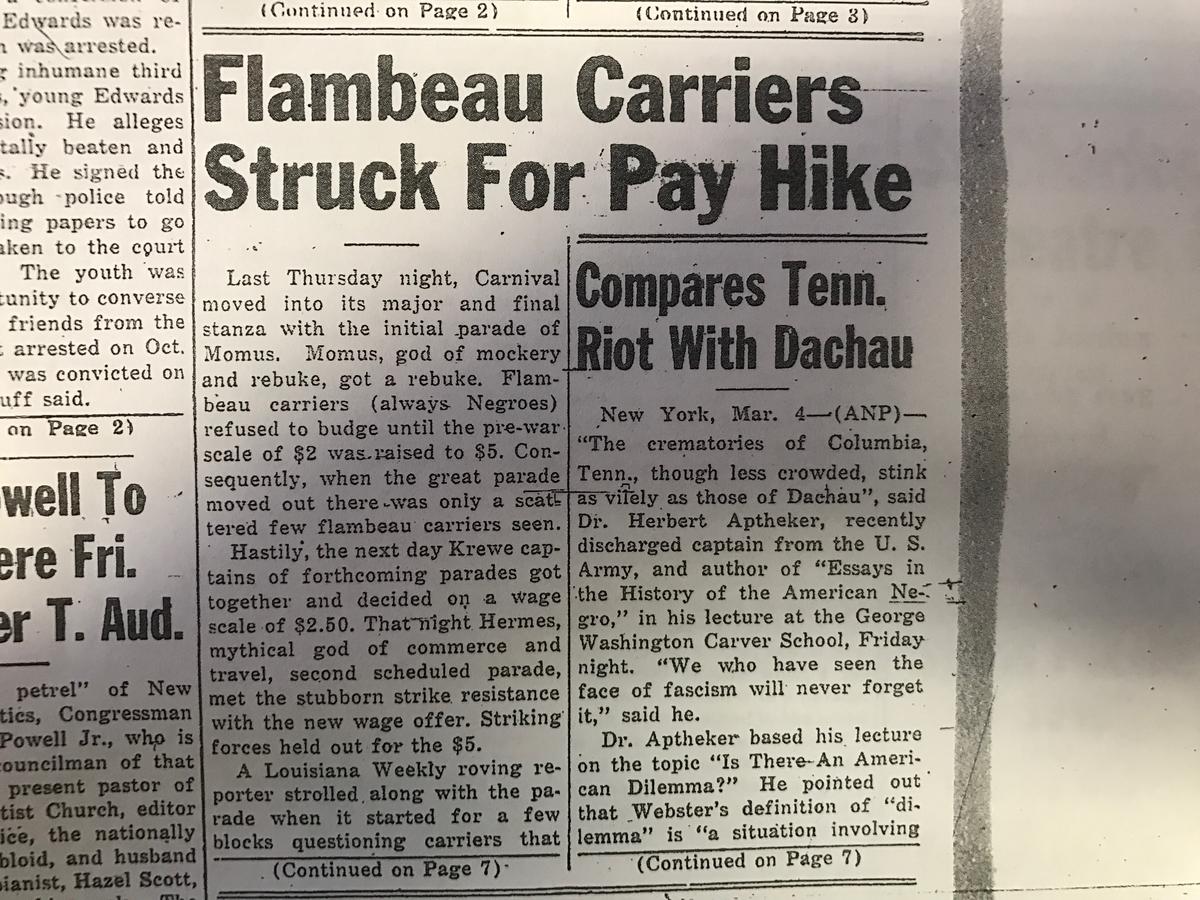 The Times-Picayune, on the other hand, had little mention of the strike. But along with the New Orleans Item,the black run Louisiana Weekly also had considerable coverage of the strike.

Rien told me that Weekly’s reporter talked to one man who said, “of all the nerve of appealing to veterans. There’s not a place along the parade route where vets’ wives or children can find seats to see parades.”

Basically, how are you going to ask us to save the party if we’re not even invited in the first place? So the flambeaux struck with the support of black veterans who refused to become scab laborers.

“It seems to have been a total strike,” Rien said.

I wanted to put this strike in context, so I went to labor historian Charles Chamberlain.

“1946 is a really interesting year,” he said. “It comes at the end of the war where there’s a lot of momentum, especially in the African American community, for political organizing and labor organizing.”

Charles said that during the war, newly politicized church leaders and labor organizers were working together in New Orleans for economic and civil rights. “I wouldn’t be surprised if, for example, some of the flambeaux members were members of a local union that was active and then politically active, or hanging out with other people, either at their church or just as friends, who were part of this sweeping political activism in 1946.”

He said that this also explains why they were not about being scabs. “You may have had such strong political solidarity, especially among veterans who really saw, after they fought for democracy, democracy back at home being so important that they refused to cross the picket line.” 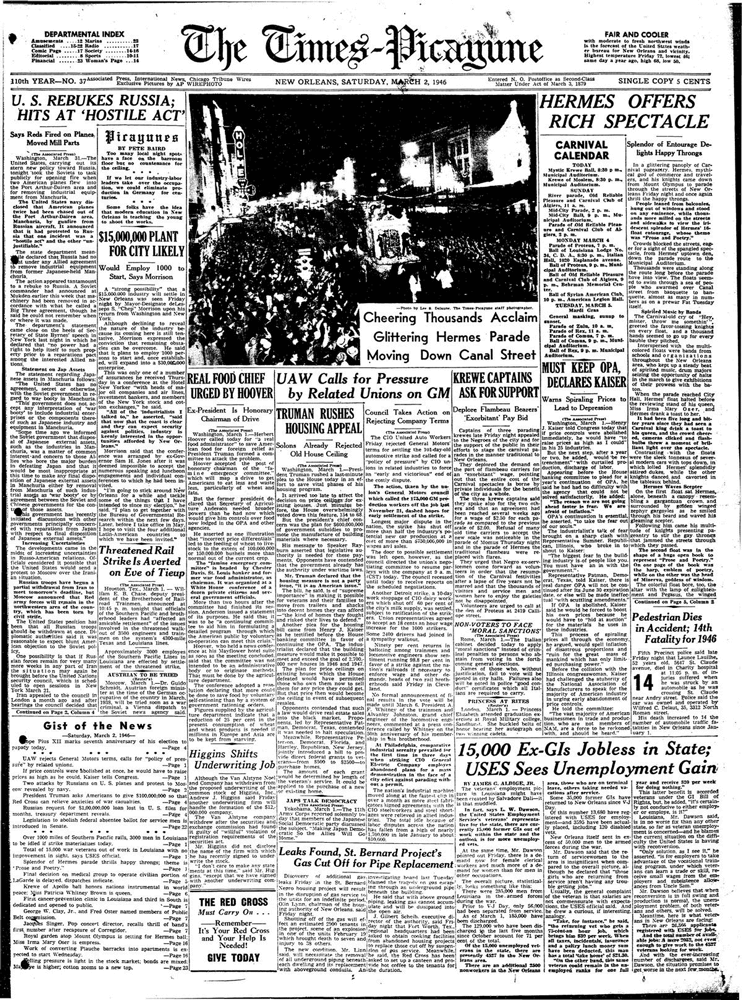 It also didn’t surprise Charles that the Times-Picayune hardly covered this story. “I think the Times-Picayune was known as having a more business friendly editorial policy, and maybe they didn’t want to give coverage to any labor unrest that could be positive coverage. So that would make sense, and I imagine that was an important, symbolic strike.”

And a successful one. After a year of refusing to march, the krewes granted the flambeaux $4.00 per parade, one dollar short of their $5.00 request. The parades were lit once again. 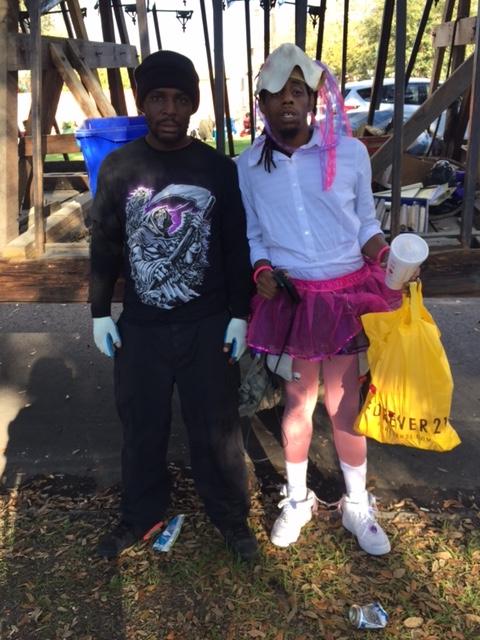 Eddie Smith (left) and a fellow flambeau carrier wait at the staging grounds on Napoleon and St. Charles Avenues before the parades roll the Thursday before Mardi Gras, 2017.
CREDIT LAINE KAPLAN-LEVENSON

In Eddie’s first parade of 2017, he made $600.00. But then again, it was the NBA All-Star weekend. Even so, Eddie said, it’s not just about the money. He loves it, in part, for the physical workout. “After this I feel nasty like I really need to take a fast bath because that stuff is all on you and you be sweating in it, and that kerosene mixed with that sweat? That kerosene gets in my nose,” Eddie said. “I put the towel in my nose and beaucoup black stuff comes out of my nose. So that’s why you got to have a handkerchief to cover up your nose, so you won’t inhale that stuff. I love it though…I love it.”

Those torches weigh around 70 pounds, and you’re carrying it over your head for hours. And it’s still as hard as it was a hundred years ago.

But carrying a flambeau also allows Eddie to be a part of Mardi Gras.

That’s something Rien was also thinking about. “It’s a way to be embedded in Mardi Gras, embedded in a parade without being of Mardi Gras, so without paying those extravagant dues it takes to be a member of Hermes or Rex or whatever. I mean this is what Mardi Gras is all about. It’s all about participation.”

And it’s about tradition. Eddie is 33, and he has been carrying since he was nine years old. “I grew up doing this. It’s been like generations, you know, my grandpa even did it, so, you know, they got it from their daddy, I got it from my uncle and daddy, and I never looked back.”

That’s why Eddie is going to keep doing it until he’s too old to tote. That’s why he’s training the next generation already.

“I got a son right now, because once I get a little older, he can teach his kids how to make an honest dollar the right way,” he said. I’m just teaching him how to hustle.”

This is emotional for Eddie, and I can relate to the guy for getting sad about something ending before it’s even over.

“This the only time I see people coming together, only for the parade, you know what I’m saying? And I like that,” he said. “And that’s why I don’t like when it’s over with. I’m wanting to cry.”

I told him he could cry in front of me if he wanted to.

But there’s another reason Eddie likes being a flambeau carrier.

TriPod: New Orleans at 300 is created with support from The Historic New Orleans Collection and the Midlo Center for New Orleans Studies at UNO.