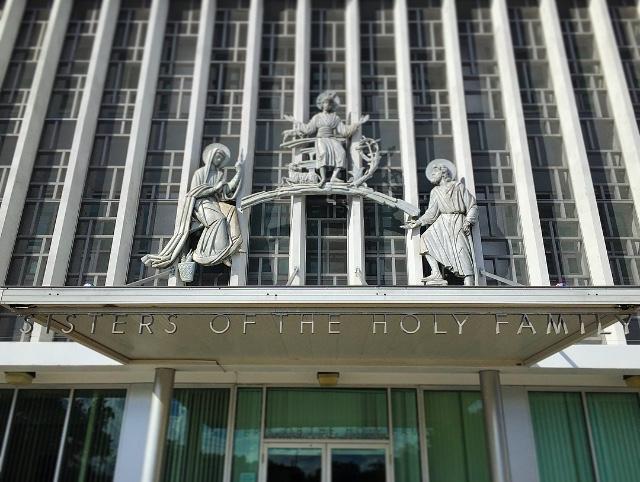 TriPod New Orleans at 300 returns with a story of The Sisters of the Holy Family, the religious order of nuns for free women of color founded by Henriette Delille before the Civil War. They’re still ministering today.

Driving along Chef Menteur Highway out in New Orleans East, you pass your fair share of fast food joints, RV parks, and Super 8 motels. And then, a huge Nativity scene on a big mid-century building. It’s the motherhouse of the Sisters of the Holy Family.

Sister Greta Jupiter is the congregational leader of the Sisters. She walks  from the chapel to the dining hall, where the 50 some odd sisters share their meals.

“The sisters eat everything,” she says. “Anything you put out on the table they’ll eat it.” 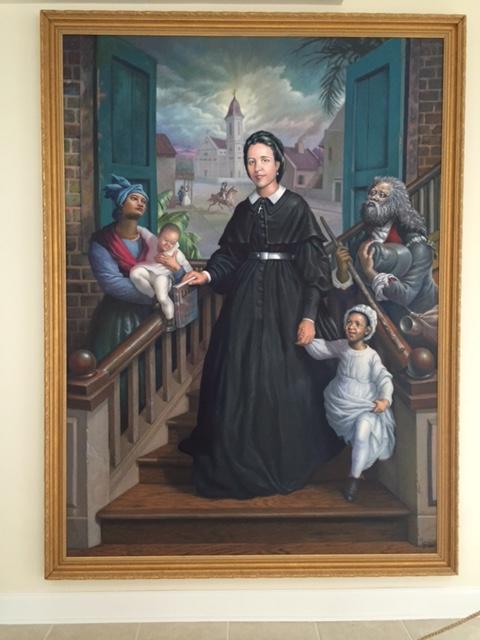 A life-size portrait of Henriette Delille that hangs in the parlor of the Motherhouse of the Sisters of the Holy Family.
CREDIT LAINE KAPLAN-LEVENSON / WWNO

Sister Greta moved on to the two parlor rooms, one marked by a life-size portrait of the foundress of the sisterhood, Henriette Delille. The other parlor features a poster of another notable person of color, President Barack Obama. “He’s the first African-American president,” Sister Greta  says, explaining his framed presence. “So that puts him in here automatically. It’s quite an accomplishment.”

Speaking of accomplishments, the Sisters of the Holy family have been going strong 175 years. They started as an African-American Catholic community in the Treme in 1842, during slavery. A young free woman of color named Henriette Delille created this sisterhood to feed the hungry, care for the sick and the elderly, and educate young people. Today’s 84 sisters continue to carry out that mission through places they opened, such as St. Mary’s Academy, a school that now sits right behind the Motherhouse, but started out on Chartres street in 1867. And the Lafon Nursing Facility, the oldest nursing home in the country, founded in 1841. That’s 20 years before the Civil War; so how, at that time, did a woman of color start a religious community?

“Henriette Delille and Juliette Gaudin and Josephine Charles were trailblazers of their time,” says Sister Greta Jupiter, talking about Henriette and her two best friends Juliette and Josephine. “And I know that they were faced with a lot of obstacles, not only with the civil authorities but also with the church authorities. It was not acceptable that a person of color could live a virtuous life.”

Virginia Gould is an adjunct professor at Tulane University and historian for the Sisters of the Holy Family. “She was a woman in a society that discriminated radically against her,” she says of Henriette and her dream to start a religious order. “And what’s really remarkable about her story is that she did so in order to take care of enslaved women and children. She was literally dedicating herself, her life, to the poorest of the poor.”

A little background: Henriette’s great-great grandmother, Nanette, was enslaved. Nanette had a daughter by her owner and eventually gained her and her children’s freedom. Henriette was a fourth generation of free women of color in her family. She was born in 1812. She had a fairly affluent upbringing and went to the St. Claude School, which was dedicated to the religious education of women of color. There are no records indicating that Henriette herself ever married, but she did give birth to two sons by the time she was 24. Sadly, both died at the age of two, one right after the next.

“And I think it was such a personal tragedy for her,” says Virginia. “It appears that she turned to the church, because very soon after the death of her second son she was confirmed.”

From that point on, she dedicated the rest of her life to Catholicism. She wanted, or really needed, to found her own religious sisterhood, because she couldn’t join any existing ones, because she wasn’t white. She could have left the South for Baltimore to join the Oblate Sisters of Providence, the first order of African-American nuns in the United States. But maybe she didn’t know about those sisters. And either way, that’s not what she wanted, says Virginia. “She wanted to care for her people, for people of African descent. There were many white communities of sisters or nuns in New Orleans at that time. That was not their mission. It wasn’t their ministry.”

So in 1842, she and Juliette and Josephine moved into a house on Bayou Road and went to work. The three friends did this work for ten years before they were officially recognized by the Church. Then they took vows. Over the next decade, the Sisters of the Holy Family recruited about ten more sisters.

Henriette Delille died in November of 1862, at 50 years old. It was the beginning of the Civil War, right when the city was occupied by Union troops. “The city was in an uproar,” Virginia says. “And she passed away. So with all of those things going on, most of the women quit.”

The sisters went from about 12 free women of color to half that. But they survived the end of the war. Then, newly emancipated families came to register their girls in the Sisters of the Holy Family school. Fine, right? Not so much. Because in post-Civil War New Orleans, it made a big, big difference whether you and your family had been free or enslaved prior to emancipation. The free population said to them, “if you take these children, we will withdraw our children.”

Why did the formerly free people of color not want newly freed people of color entering those schools? Virginia explains. “They were class conscious. They did not think that they were the same. They discriminated against the enslaved, and I think this is a perfect example of it.”

This was a tough decision. But in the end the sisters decided not to let in formerly enslaved children, mostly because they needed the tuition from the formerly free people of color, who were pressuring them to keep the emancipated slaves out.

Then, a few years later, the archbishop asked the sisters to take in his housekeeper, Chloe Preval, a formerly enslaved woman. She told him she had a calling. Juliette immediately said no. But Josephine said yes. And so, in 1867, the sisters broke up. “They called it a split house,” says Virginia. “They weren’t speaking. They were best friends and they weren’t speaking. And I thought for the longest time when I was looking at this story, that it was about the fact that she had been a slave and that she was a freed woman instead of a free woman of color. And then Sister Doris said no, that’s not what happened.” 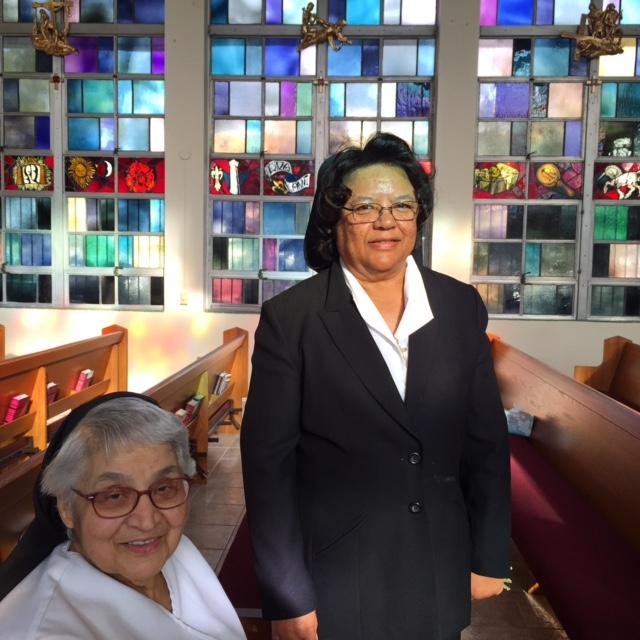 Sister Doris has been a sister for 67 years, and she and Ginger have become close. She’s warm, smiley, and youthful at 85 years old. She elaborates on the housekeeper dilemma.  “Well, see, the free women of color that founded the community were educated, and they did not want to be domestics. So Juliet said no, we will not take anybody who can’t do the work that we are doing.”

The work was being teachers. And Virginia says their own education was a source of pride…and status. “They all came from elite free families of color, and Chloe Preval was not an educated woman, and they didn’t want their community being painted with that housekeeper brush. Whites were afraid of free people of color and freed slaves because of the fact that they were pressing for political rights, and they wanted them to stay in their place. So the Sisters of the Holy Family are caught in this.”

Josephine, Chloe, and a few other Sisters moved to a separate house on Chartres Street, and Juliette stayed on Bayou road. Both houses were ministering to the poor, helping them with food, clothes, etc. But Juliet’s school was for elite girls of color, and Josephine’s was geared specifically towards educating the newly freed, poor girls of color. It was a split house…over one sister. Chloe Preval was the only formerly enslaved person ever to become a Sister of the Holy Family.

But for Chloe, it was a calling. That’s what she told the Archbishop. Just like it was for Henriette Delille, and Sister Greta, and Sister Doris. “I think Jesus called me and I answered it,” she says. “And it wasn’t very hard, because I didn’t find a lot of objections from family or friends, you know? And so far it’s worked out quite well all these years!”

After a decade operating under the split houses, Juliette and Josephine both needed more space to accommodate the growing ministry. In 1883, the two decided to reunite and govern one school that took in all girls of color. And the ministry grew. At their height the sisters grew to more than 300, stationed throughout the United States, Belize, and Nigeria. 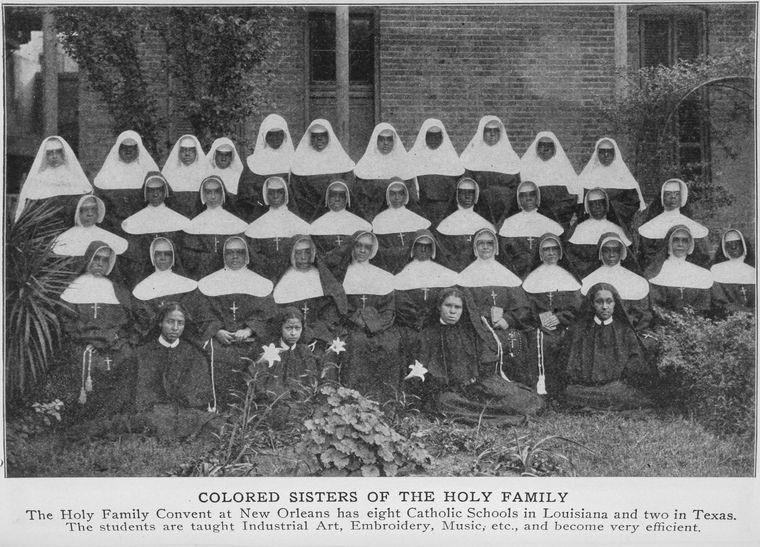 More than 100 years after her death, Henriette Delille is on the path to Catholic sainthood. Since 1988, a devoted team has worked to study her life and prove she’s a saint. Sister Doris spends most of her time and energy completing the final phases of helping Henriette Delille become canonized.

“I think it will be one of the biggest things that ever happened. Big big big. And we believe that she’s a saint, you know? But we still have to have it from the Church.”

To become a saint, you need a miracle. One could argue that a free woman of color starting a religious order during the height of slavery—that’s pretty miraculous. Sister Doris agrees.

“It’s a miracle that we exist today, that we actually came into being, and that sticks with me all the time.”