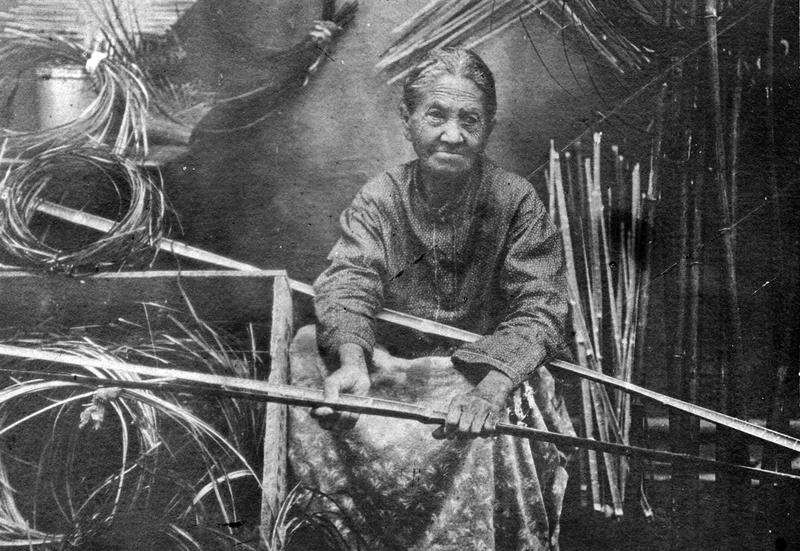 You know how you can walk into a mainstream clothing or household store, like Urban Outfitters, H&M, Pier One, and find indigenous designs printed across anything from a rug to a tank top? Well this is the hyperlocal origin story of how native aesthetics entered into non-native markets.

Dan Usner and Paul Trevor have known each other for a while. Usner is a history professor at Vanderbilt University. He grew up in New Orleans. Trevor is curator of Native American and Pre-Columbian Art at the New Orleans Museum of Art. Paul brought Dan in to the museum to see baskets made by the Chitimacha Nation that are part of NOMA’s collection. The Chitimacha live on tribal lands in Charenton, Louisiana, about a two-hour drive from New Orleans, and just twenty miles from hot sauce central Avery Island.

The Chitimacha have lived there for centuries and are among a few Louisiana tribes that weren’t forced west when white settlers came to town. 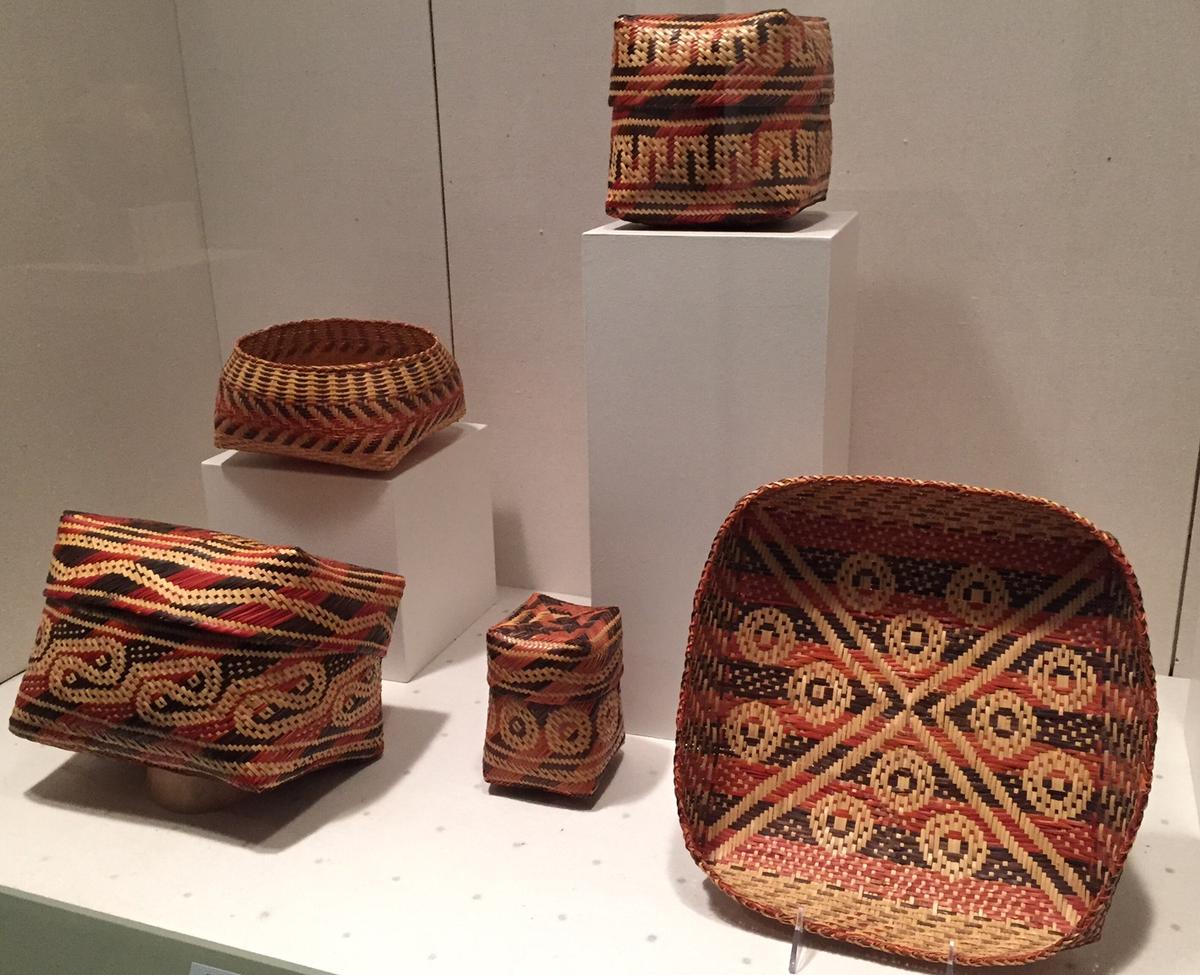 “Indian people around the country, they lost their language, they lost their religion,” Trevor says. “The one thing that they still have is the basket-making tradition. And in many Native American communities, babies are put in a basket. That’s their cradle. And they’re buried in a basket.”

Let’s talk about these Chitimacha baskets—they’re beautiful and woven out of river cane that’s made into narrow strips and dyed yellow, black, and red. Usner says the process is long and labor intensive. “First off, the women would go out into these dense canebrakes where this natural river cane grew, then cut it, and bring it back home. And then they would start to splice it…”

…with their teeth. Then they would dye some of the strips in water boiled with either the hulls of black walnut or a root called swamp dock, and then start the weaving. 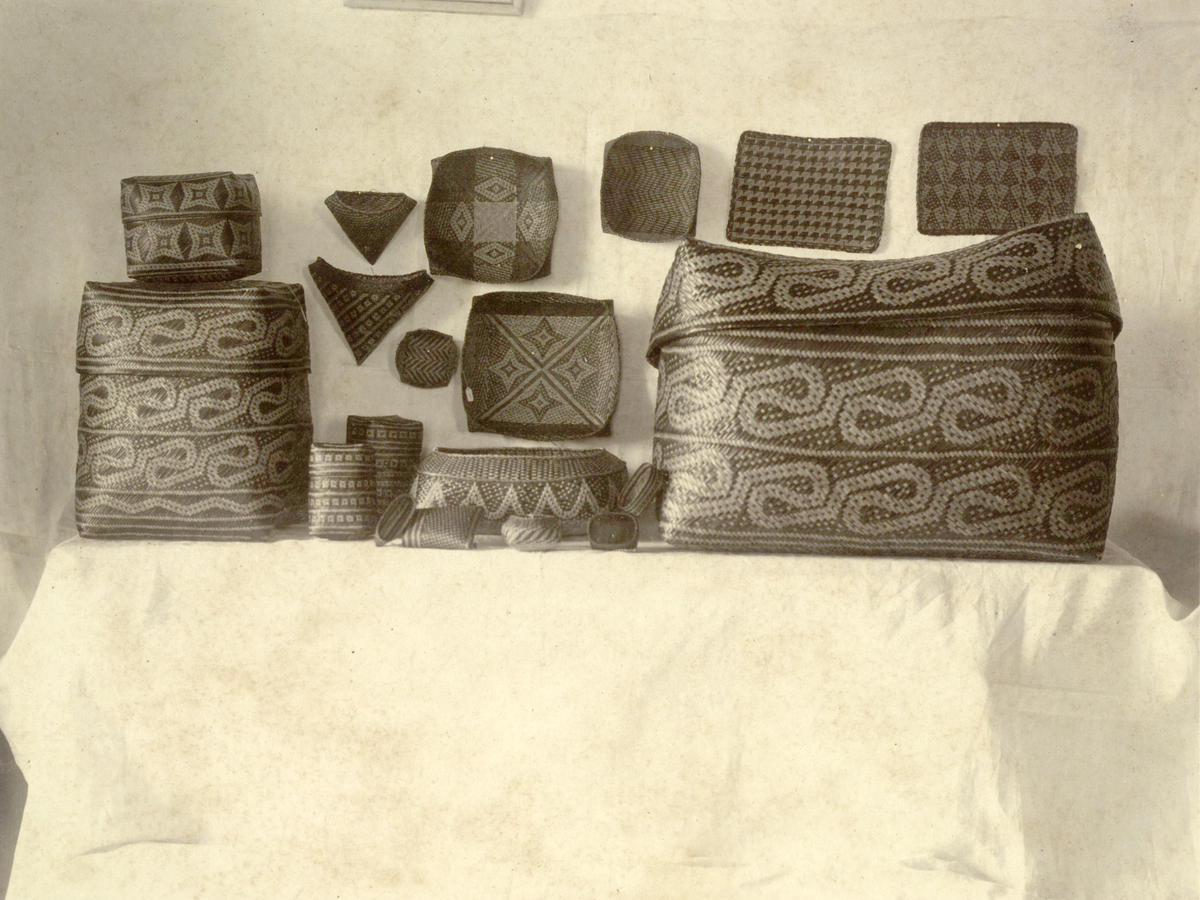 Chitimacha women made the baskets. And another group of women took a liking to them. This phenomenon can be seen across the country in the late 19th century—affluent white women taking interest in indigenous crafts and seeing themselves as saviors of an at-risk population and art. This patronage was commercialized through the Christian Woman’s Exchange.

Women’s exchanges were widespread across the United States as places where, on consignment, crafts produced by local women, mainly rural women, could be sold. And that was the case for the New Orleans store, located on Lafayette Square in the late nineteenth/early twentieth century. This is where the family behind Tabasco comes in: the McIlhennys.

Shane Bernard is the McIlhenny and Avery Island historian. “Even though the McIlhennys were located out here on Avery Island, 135 miles from New Orleans,” says Bernard,  “they very much looked to New Orleans for much of their social life and business life. And the Christian Woman’s Exchange was set up to pair well-to-do women with impoverished women. And you know, today it sounds a bit maternalistic. And perhaps it was.”

This plays a part here. When the McIlhenny sisters—Sarah McIlhenny and Mary Bradford—saw the baskets of Chitimacha women, they saw these traditional crafts as works of art. They said to the women weavers, “look, if you keep making this basketry like you’ve been doing for hundreds, if not thousands, of years, we will market it for you to collectors all around the country, as well as to museums like the Peabody Museum and the Smithsonian in Washington D.C.”

And so a business relationship formed between these native and non-native women. And a complex dynamic began.

“Certainly our history would be drastically different had there been no relationship with those ladies,” says Kimberley Walden, a Chitimacha and the tribe’s cultural director. Those ladies are the McIlhenny sisters. At the turn of the 20th century they turned the tribe into somewhat of a weaving factory. All of a sudden, the women weavers were being asked to produce on an unrealistic scale and schedule.

Walden learned about this more nuanced relationship by reading letters between the McIlhenny sisters and the tribe. Christine Paul was the weavers’ main representative, as she was one of the few Chitimacha women who could read and write. 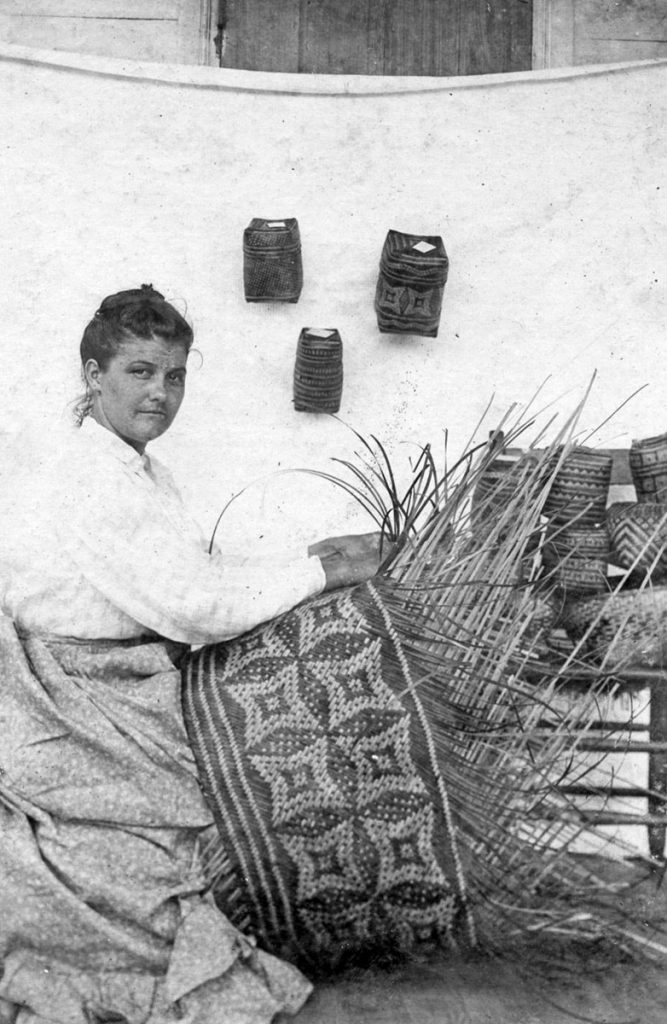 “One letter I read, they wanted 100 mats,” recalls Walden, “which are huge. They would be the size of an area rug.”

The McIlHenny sisters ordered 100 of these to be produced in a week. Christine Paul wrote back that that was physically impossible.

“So I think their knowledge of the process of making the baskets wasn’t what it should have been. And they placed some pretty hard almost demands on these ladies, and Christine had every able-bodied woman in the tribe, even children, weaving constantly.”

This is where it gets tricky. The McIlhennys were definitely helping the Chitimachas turn a profit and get their artwork on the national map. But at what cost, and for whose benefit?

Usner says it’s important also to remember what drove these wealthy white women. On the one hand, Usner says they’re saying: “‘that’s our ultimate goal, for the weavers to be able to sell directly to consumers and collectors.’ But on the other hand, these white women didn’t want to give up that intermediary role.”

To allow the native women to work and sell autonomously was to lose control over the trade and give up this boss lady status. Kim Walden says that’s why Sarah McIlhenny held such a tight leash.

The women patronizing the artists often thought, “They’re my Indians, my Chitimachas,” Usner says.  “And often in correspondence, described the burdens of forcing them to produce more goods. And always wanting the quality to improve.”

This is ironic, since the Chitimachas are making the baskets according to their traditional and longstanding standards, and the white women are telling them they’re not good enough. Usner says the McIlhennys would sometimes insert guilt into the correspondence. “They’d say things like, ‘don’t you realize what we’re doing for you? Because if it weren’t for us, this craft would be dead.’”

Here’s the ugly side to the relationship. The McIlhennys saw themselves as the saviors of this craft and people. In response, Christine Paul had to walk on eggshells, assuming subservience. 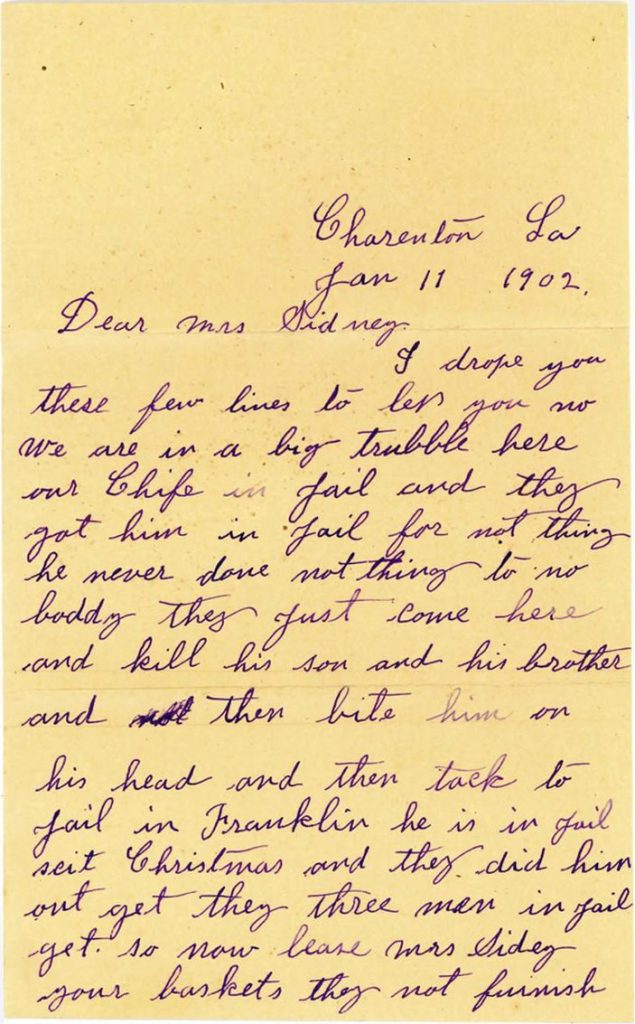 A letter written from Christine Paul to Mary Bradford in 1902 explaining troubles the tribe was experiencing, and why a basket order was going to be late
CREDIT KIM WALDEN / CHITIMACHA NATION

Christine wrote that some of the prices that she was getting for some of the baskets they felt were low, says Walden. “And then the next letter we have from her is ‘well I’m sorry. You know I didn’t mean to upset you. Please excuse me if I say something that disappoints you.’ So still trying to maintain that relationship, but not let the weavers get taken advantage of. But in reading the letters, I just feel for Christine Paul.”

Kim says there’s no doubt the McIlhennys helped the tribe, especially when their land was at risk of being taken away by the government. Shane Bernard has records of this in the Avery Island archives.

“There are some really heart wrenching letters written in broken English saying that some local landowners are trying to run us off our ancestral land,” says  Bernard. “The sisters hired an attorney for the tribe and also ended up buying the tribe’s core 400 acres of ancestral land and deeding it to the federal government, so that the federal government would finally recognize it as a reservation, which it did.”

In 1916, the Chitimachas finally won the long struggle to resist displacement and maintain control of their ancestral land. It also shows how the Chitimacha women did hold power, since they’re the reason the McIlhennys advocated for them. Their baskets became a tool to negotiate and defend the rights of their community.

“So that’s the challenge,” says Usner, “to capture the full complexity of the relationship. It was definitely unequal. And yet, it was mutually beneficial.”

Only four weavers now produce Chitimacha baskets. People still ask for them, so Walden is confident the tradition will continue. But weaving is no longer anyone’s full time job.

“You can’t say quit your regular job and work full time because there are too many people that want them, you know what I’m saying? It’s different. So as long as we have it in more of a hobby style, then the demand will always be greater.”

So in some ways, the basket has returned to its original role for the tribe. Something they make—on their own terms.

TriPod is a production of WWNO—New Orleans Public Radio, in collaboration with the Historic New Orleans Collection and the University of New Orleans Midlo Center for New Orleans studies. Special thanks to Evan Christopher for the opening theme music. Catch TriPod on the air Thursdays at 8:30 a.m. and Monday afternoons on All Things Considered. To listen to TriPod anytime, subscribe to the podcast on iTunes.