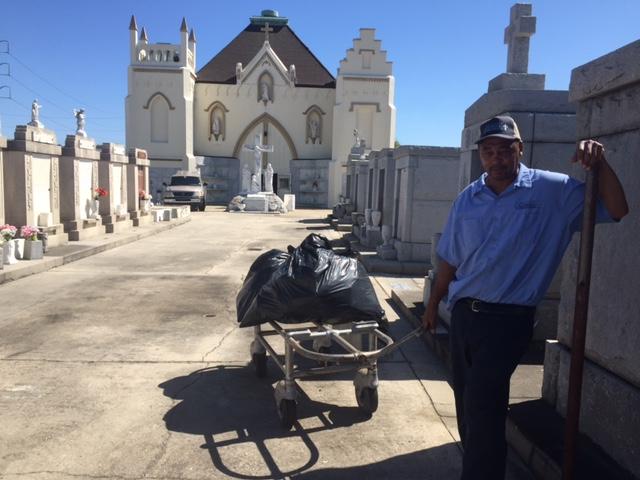 TriPod: New Orleans at 300 returns with a story of the city’s above ground cemeteries and those working behind the scenes.

The many above ground cemeteries around town are hard to miss. And they are crowded. These above ground tombs, built since the 19th century to keep coffins away from the city’s high water table, are like apartment buildings full of the dead, with multiple people in each tomb. Add to that the tour groups that cross paths as guides tell stories that keep the crowds coming, so much so that sometimes it’s hard to see the people working in those cemeteries. Let’s get to know some who spend most of their time living with the dead.

As operations manager, Alan has a lot of responsibilities and is always running from one cemetery to another overseeing his employees, general upkeep, and burials. When he took the job, people close to him were kind of freaked out.

“Some of my friends were like, ‘you sure you gonna stay there, in the cemetery? You gonna work there?’”  He recalls. “And I was like, ‘I’ll give it a try. I’m’a give it a try.’ And you know, some people still like that, and I say, well, it’s the job that never run out of business. You know? Been here 22 years.”

Alan likes his job…a lot. Like he said, he’s in this for the families. Because he knows them.

“Almost every funeral I do, I feel like I’m a part of it. I’ll be right there, right there with them. I always introduce myself to the family, you know. I give them my condolences and always tell them I’m sorry for any loss. It’s the least I can do.”

Alan says this as we walk over to a tomb that is about to receive a new coffin. The front has been taken off, and the bricks lay stacked up against the side of the tomb. There’s a red velvet curtain temporarily covering the opening, where the coffin will be inserted. The funeral is taking place while he and I are talking and, after I leave, Alan will greet those who go from the church to the cemetery and then bury the deceased himself.

“After everybody leaves I’ll stack the bricks back up, slide it [the coffin] in, and when the family leaves, I seal it up. And I actually enjoy doing it, I really do.”

And after that, Alan serves as a kind of guardian angel for the people he buries, checking on them weekly to make sure they’re OK, that no one has vandalized their space, that they’re resting peacefully. 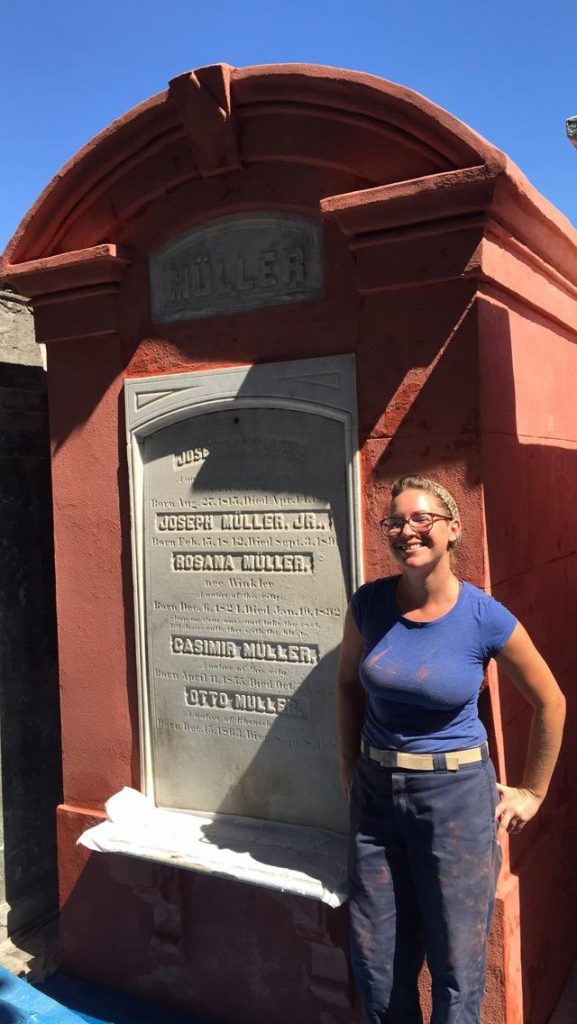 Emily Ford of Oakand Laurel next to the tomb she is restoring in Lafayette Cemetery No. 1
CREDIT LAINE KAPLAN-LEVENSON / WWNO

Some cemeteries are a bit less restful, like Lafayette No. 1. It’s right across from Commander’s Palace restaurant and gets a lot of tourists. Emily Ford owns Oak and Laurel, a preservation company. Families hire her to restore their tombs. She’s in Lafayette No. 1 painting a coat of lime wash on a tomb, but not the usual white.

“Raspberry red,” she says with a grin. “It’s going to be really great.”

Unlike Alan, who’s employed by Catholic Cemeteries, Emily is self-employed. The tombs themselves are private property, so the upkeep’s private, too.

“Those clients are people who I speak to on a weekly basis, you know?” She says.  “I like personal relationships because what I provide to them is pretty intimate, honestly. Not to be personal about it is kind of missing the point.”

And the work has seeped into her personal life. She geeks out on this stuff.

“I go home, and I research cemeteries, if I have extra time. We were out last night, and I was like, oh, I could go home and organize some photographs! I could do some indexing! It’s a constant love.” She got a master’s in historic preservation and has worked in cemeteries ever since.

Michelle Duhon is another preservationist. Her company is called Bayou Preservation LLC. She says, because so many family members are in these tombs, there need to be rules that govern burial. For instance, after you put a coffin in a tomb, it’s a year and a day before you can put someone else in there. Michelle explains.

“So if grandma goes in a vault and you brick her in and put her name on the tablet, you gotta leave her in there alone at least a year and a day before you open that vault back up.”

So what do you do if grandpa dies three months later, and Grandpa wants to be with grandma? She continues.

“Most of these tombs have two vaults. They have a top vault and a bottom vault. So if you get grandma and grandpa right behind her, that’s great, you can accommodate up to two burials within a year and a day. If you know, Aunt Sally dies also, then she’s got to go rent an apartment at the front of the cemetery for a year and a day until you can move her into your family tomb.”

By renting an apartment, Michelle is referring to the wall vaults you often see that border the cemeteries. A lot of the time they’re used as temporary holding cells. After a year and a day, the bodies buried in the tomb, grandma and grandpa in this case, have decomposed and are basically just piles of ash and bone. This happens quickly not only because it’s warm outside, but because it gets really hot in those tombs. During the summer months, they can reach as high as 300 degrees, which is useful, because then there’s room for Aunt Sally.

“And this is where the saying I wouldn’t touch that with a ten foot pole comes from,” Michelle says. “They take a ten foot pole and stick it in there and kind of rake them [the ashes] out or sweep them out, and put them in something like a burlap bag, and then that bag can go into the back of the vault. And then you just put the next person in. So every space is getting reused over and over. 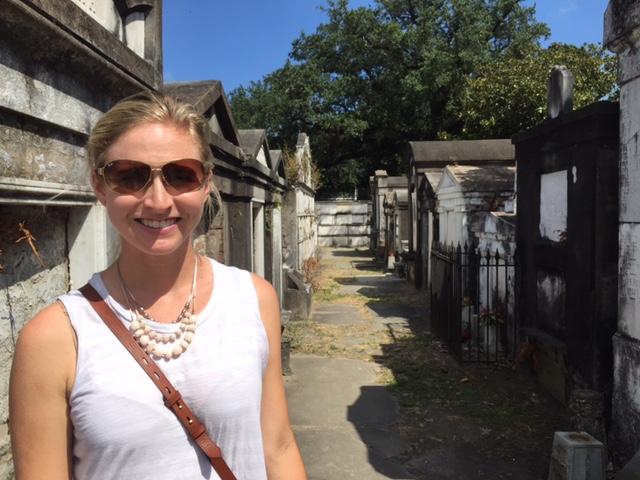 Michelle Duhon of Bayou Preservation LLC in Lafayette Cemetery No. 1, a cemetery in which she does a lot of restoration work
CREDIT LAINE KAPLAN-LEVENSON / WWNO

Alan, Emily, and Michelle all love their jobs in cemeteries. But remember, they’re jobs. Ever met a guy who takes care of a whole cemetery for free? Enter Michael Duplantier.

“I’m not a professional conservator. I’m not trained in that field. But I know when something needs to be done, and I can figure out how to do it.”

Michael is sitting in the middle of Odd Fellows Rest Cemetery at the corner of Canal and City Park Avenue. He comes here almost every day. The cemetery was never owned by the city or the archdiocese, because it was created by the Odd Fellows fraternal organization (similar to The Masons)  to house deceased members of that 18th Century society. The Odd Fellows local chapter eventually closed in the 1970s, and the cemetery was abandoned for more than 40 years, until Michael decided to see what he could do with it.

“The vast majority of the tombs in the cemetery are orphan tombs,” he says, looking at two directly across from him. “There’s no way really to determine who owns these tombs. That’s why we call them orphans. They have no family to care for them.”

Michael’s background doesn’t exactly suggest that this is where or how he’d be spending his time. He comes from a French Colonial family that’s been in New Orleans since the beginning of New Orleans. And he’s a retired attorney, who practiced law for 45 years. Most of his lawyer friends don’t know about his new job—he hasn’t told them.

“It’s hard to explain to lawyers how you can segue from the practice of law to be a groundskeeper in a cemetery.”

And even harder to explain this:

“At the risk of some people thinking I’m crazy, I sort of talk to the residents here. They don’t talk back fortunately! I’ve looked up the history, so I feel like I’ve gotten to know some of these people.”

When he’s not getting to know the residents, as he calls them, Michael’s pulling out weeds, mowing the grass, and reassembling broken tablets. Currently, people who want to enter the cemetery call Michael and schedule an appointment. He hopes in the next five years, the cemetery can be officially reopened to the public. He loves this place. The peacefulness is a sort of meditation for him, which makes him feel at peace with himself.

“I’m 70 years old. I’m not a young man anymore. And sometimes I think working in the cemetery helps to prepare you for the inevitability of your own death. I don’t come here feeling bad about it, but every one of these people was alive and well one day, and here they are, right?” 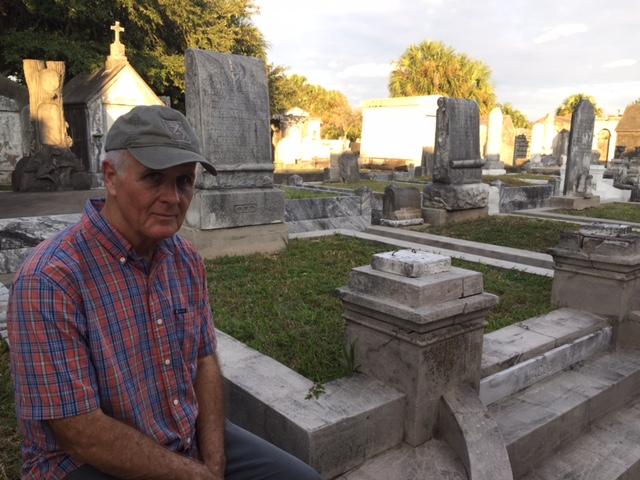 Michael’s from an old New Orleans family, so he could easily take his final rest at a fancier site, like Metairie Cemetery. But he’s likely found his spot, among the Odd Fellows.

“This job actually prepares me for the day that I leave. When God call me home. I already have a place, bought and paid for. My name is actually on it. So at times my wife (she kind of think I’m crazy because I’m always talking about cemeteries or my life insurance policies), and she’s like ‘why are you always talking like that?’ And I’m like, ‘I just want you to be prepared.’ You know, because death do come as a thief in the night. Nobody know the time or the hour.”

Michelle has thought about what she wants, too, which is a little different from Alan.

“I’ve told my workers, man, I really love working in the cemeteries, but don’t put me in one of these tombs. I don’t want to be buried in my office! It’s like being buried in your cubicle. So for me, I’m like, no. Scatter me at the beach or something.”

TriPod is a production of WWNO in collaboration with The Historic New Orleans Collection and the Midlo Center for New Orleans Studies at the University of New Orleans.