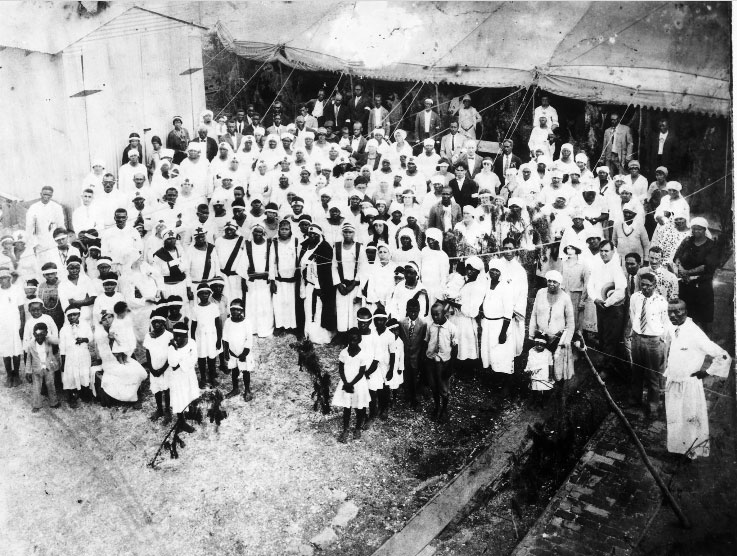 TriPod: New Orleans at 300 returns with a portrait of Mother Catherine Seals, one of the city’s most prominent 20th century spiritual church leaders.

Mother Catherine Seals is a mysterious figure. There’s not much written about her, and there are only a few photographs of her. So a lot of what we do know about this spiritual mother is hearsay.

Chandra McCormick and Keith Calhoun are both documentary photographers who grew up in the Lower 9th Ward. They grew up hearing about her. “She was a great healer; she took care of a lot of people. She had the juju, and she was rocking,” remembers Calhoun.

Calhoun continues. “My mother always talked about Mother Catherine, that she walked around barefoot through the neighborhood.”

Some of the stories about her say that once she created her Bethlehem in the Lower 9th Ward, she never left.

This Bethlehem in the Lower 9th Ward was the church and manger where Mother Catherine ministered to thousands of people, black and white, during the height of Jim Crow in the 1920s. She called her compound the Temple of the Innocent Blood. To understand why, we need to go back and understand more about this woman, before she was known as Mother Catherine Seals, when she was still Catherine Nanny Cowans, a girl from Kentucky.

Dr. Ina Fandrich studies African spiritual heritage in Catholic areas in the New World, which is how she discovered Mother Catherine who, as a 16 year old in 1913, was still Nanny Cowans. Nanny leaves a rough life in Kentucky and heads for New Orleans on her own. Within a year she gets married. Her husband was physically abusive, so she leaves him. A few years later she marries again, but this husband also became violent. So she leaves him and marries for a third time. But her third and final husband is the most dangerous of all, says Dr. Fandrich.

Kodi Roberts is an assistant professor of history at Louisiana State University. He says Cowans goes to a healer named Brother Isaiah, a white man who claims to be a prophet and a spiritual healer who’s apparently healing folks up on the levee of the Mississippi River. “But when she goes to him, he turns her away because she’s African American,” Roberts says.

She prays for help and is visited by a spirit, Roberts says. “The spirit tells her to create her own organization of sinners that she can help and she can heal.”

Her spiritual experience leads her to Mother Leafy Anderson, the founder of the spiritual church movement in New Orleans. Anderson trains her to be a spiritual mother so she can follow her calling and start her own independent church. Keith Calhoun remembers when there were a bunch of these around his neighborhood.

“At one time in the Lower 9th Ward, you had a lot of churches out the back of their houses. You went back there and did your worship.”

Chandra McCormick also remembers these days. “As a child I saw many women in my community dressed in all white, heads wrapped. And when they walked in the street they had their white on, and that meant they were a spiritual person.”

But most of these rituals were kept behind closed doors. Since spiritual practices trace back to African traditions, many white people associated these religions with Voodoo. But they’re not the same thing, says Roberts. “Anybody doing anything unorthodox that maybe mainstream Christians would have a problem with, they get tagged with that label of Voodoo, as kind of an accusation about their practice. It says black. It says backward. It says dangerous.”

John Taylor also grew up in the Lower 9th Ward. He says this is exactly why the spiritual churches weren’t throwing up billboards all over town.

“All this was done, most of the time, under secrecy. You knew where the churches were sometimes, but they didn’t have a big sign saying it was a spiritual thing. I remember when you stuck a nail in your foot, they’d put dirt in there! And it would heal! And if you told the doctor that you were putting dirt on the sore, they’d go crazy! The public scrutinizes things that they don’t understand.” 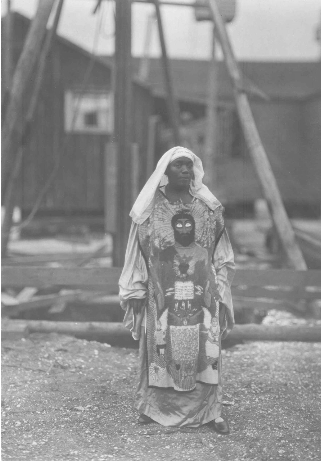 That’s why when Nanny Cowans decided to form her own church, she looked to the outskirts of town, across the industrial canal, where there was still no electricity or paved roads. She changed her name to Mother Catherine Seals, bought what’s now an entire block of Charbonnet Street in the Lower 9th Ward, built a ten-foot wall around her property, and got to work.

Assistant professor in the UNO Department of Anthropology Dr. Ryan Gray has done controlled digs on what was formerly Mother Catherine’s Temple of the Innocent Blood on Charbonnet Street in the Lower 9th ward. He says there were two main buildings. “Her temple, which was the more private, sort of ritual space, and then her manger, which was this kind of open air building where she is described as holding more than 300 people.”

Ryan is enamored by descriptions of the physical space. Records say there were usually more than 500 lamps blazing at any given time. There were also sculptures scattered all over the place—small clay sculptures that Mother Catherine made herself. And, it was muddy.

“You know, all the accounts, they talk about roads ending before they even get out here,” Gray says. “You had to walk over through these muddy marshy blocks, and then it was this walled compound rising up in the middle of the marshland.”

He says choosing to be right at the edge of the city limits was deliberate.

“It was just inaccessible enough to offer some sort of protection for a group that was defying racial and gender norms.”

Mother Catherine was most known for her healing powers. She used simple ingredients such as castor oil and Epsom salts to ward off or expunge disease. There are also descriptions of people having wounds healed through chickens that were tied onto their legs.

As word got around about Mother Catherine, more people trudged through knee deep mud to visit her temple, which brings us back to the name: The Temple of the Innocent Blood. Dr. Ina Fandrich explains.

“What she found out was a lot of women who have children out of wedlock, both black and white, are discarded by society. These children, who are often subjects of terrible abuse and violence, now become the innocent blood. Because Jesus was born out of wedlock.”

Mother Catherine related to women who were abandoned and abused by men. So she decided to service these women, first and foremost. But she also vowed not to turn anyone anyway, no matter their age, gender, or race. This is how the Temple of the Innocent Blood flattened racial hierarchies, which a Times Picayune reporter named Francis White noticed. For a story on Mother Catherine, he tagged along with a few first-time white visitors in 1924. Fandrich recounts what took place.

“A small African-American girl who they said was about nine years old ushered them inside. They wanted to sit up front, and the little girl said, ‘oh no, that’s only for saints; I am a saint. I must say you have to sit in the back.’ What a peculiar reversal of the social order when, if you are white, or if you’re anyone, if you’re the governor, you sit in the back! Because you are not a saint.”

This caused backlash, she says.

“Apparently, there were arson attacks on a regular basis. There were a lot of people upset—how can you all sit in one compound, happy together?  You’re not allowed to do that.”

So why did white people go to her temple? Well, let’s say you didn’t have money to see a doctor, or you did see a doctor, who said there was nothing he or she could do. And you heard there was a healer down in the Lower 9th who was curing tuberculosis? You went.

“She was a very, very intense healer, and she put up these absolutely amazing ceremonies,” says Fandrich. She knows this through the writings of novelist Zora Neale Hurston, who visited the Temple of the Innocent Blood in the 1920s and was taken with Mother Catherine’s aura. “She said: ‘Catherine of Russia which was the great Tsarist of Russia could not have been more impressive upon her throne than was this black Catherine sitting upon an ordinary chair at the edge of her platform within the entrance to the tent. A white robe and a gorgeous red cape falling away from her broad shoulders and a box of shake of salt in her hand, like a rod of office. The White Cockatoo would scream when the shouting got too loud. All through the service four mongrel dogs strode about, a donkey, a mother goat with her kid, a number of sheep all wandered in and out of the service without seeming out of place. And the world moved on.’”

What seemed like a wild mess of a world was actually designed with intention. Gray explains.

“What is being perceived as disorder by visitors is her way of creating a disorder that dislocates people from the sort of everyday society that they’re used to. When people entered, they would immediately know that they were somewhere where the traditional rules no longer mattered, and where she made the rules. And the racial hierarchy was dissolved in that space, at least for a few minutes.”

Mother Catherine Seals led the Temple of the Innocent Blood from 1922 until her death in 1930. Her jazz funeral was one of the largest in the city’s history, with thousands of people in the streets and a write-up in TIME magazine. Mother Rita was second in command to Mother Catherine and kept the temple alive for another few years. Ultimately it couldn’t survive without her.

“If you would go to a spiritual church there’d be a picture of Mother Catherine on the altar, like she was their saint: their patron saint.”

There were still a few spiritual churches operating in the Lower 9th Ward in the early 2000s. But Hurricane Katrina wiped them out, and they haven’t come back. If you were running a church out of your house and you lost your house, you also lost your church.

But John Taylor says Catherine Seal’s legacy lives on, even without any churches that trace back to her.

“The legacy is that nobody forgets her! Even people like me who never physically saw her or went to this church. People like Daniel Boone or Davy Crockett, they’ll never die!”

TriPod is a production of WWNO in collaboration with The Historic New Orleans Collection and the Midlo Center for New Orleans Studies at the University of New Orleans.

Photograph of Mother Catherine and her congregation at the Temple of the Innocent Blood, ca. 1929. HISTORIC NEW ORLEANS COLLECTION, MADE POSSIBLE BY THE CLARISSE CLAIBORNE GRIMA FUND.
Back
Episodes by Category