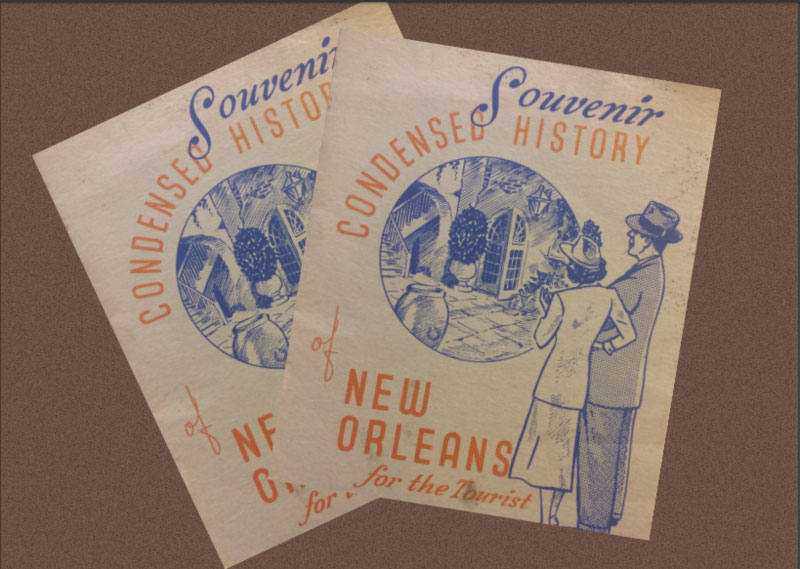 TriPod: New Orleans at 300 returns with part two in a series on links between history and tourism.

Part one left off with the idea that New Orleans culture is the city’s best economic bet. The idea that, as Lynnell Thomas says, “when tourism succeeds, everybody succeeds.”

That, she says, has not been the case.

Thomas grew up in New Orleans and now lives in Boston, where she is Chair of American Studies at the University of Massachusetts. She keeps up with what’s going on in her beloved hometown.

“Every time I look, there are more records being broken. Tourists are spending more money than ever before in the history of the city,” Thomas says. “But that doesn’t trickle down. And New Orleans remains at the top of those lists for the wealth divide between white people and black people. So tourism doesn’t solve everything. Even when it’s doing well.”

These thoughts led Thomas to write a book titled Desire and Disaster in New Orleans: Tourism, Race, and Historical Memory.

“Maybe anger is what started the whole project,” Thomas says. “Because to grow up in New Orleans your whole life, you are confronted by a tourist landscape of black docility and subservience—the mammy dolls and the pickaninnies that glorified slavery. I think I took that personally, as an assault that really defied my own experience and the experiences of my family members. So tourism didn’t represent me in my own city. I didn’t feel like I was part of the story.” 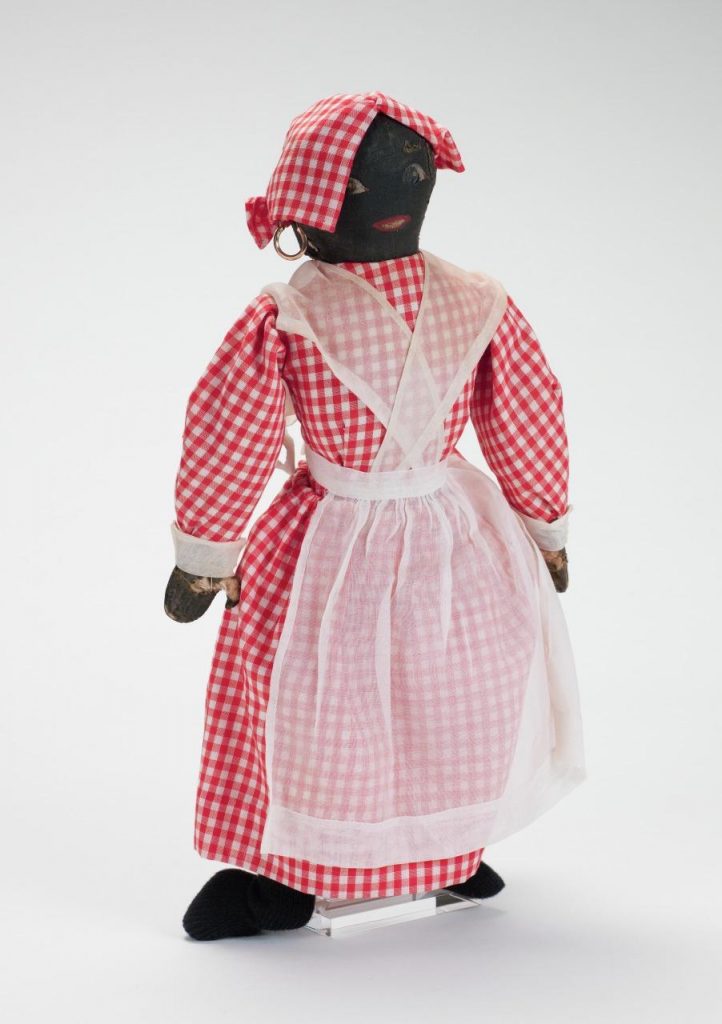 It’s not that the tourism industry isn’t including black history, Thomas says. It’s just including it in very particular ways. Take these mammy dolls that she became fixated on after seeing them as memorabilia in New Orleans gift shops. Two in particular, named Cleo the Market Lady and Emma, were dolls meant to represent the 1850s era.

They were… “well, I was going to say slave dolls but they are very clear about them being servant dolls,” Thomas says. “These dolls have inscriptions about people gathering and singing songs as they fill their bags with cotton, and a whole community effort.”

Thomas is also struck by how the dolls look; they wear makeup and jewelry and have perfectly coiffed hair.

“So we get this portrayal of New Orleans that is maintained as racial exceptionalism. There was slavery, but it was under the colonial regime of the French and Spanish, and it was beneficent, and black folks owned slaves too, so it really couldn’t have been that bad,” she says.

And there’s the emphasis on the urban center as opposed to the plantation, where—the simplified myth goes—whites and blacks, free and enslaved people of color, all lived in such close proximity, they were neighbors.

Thomas says this perpetuates the memory of the slave-owning era as a glorious time.

Which makes one think about the role of history within the tourist narrative. We make our history easier for our tourists to digest, even allowing them to experience a bit of nostalgia for some of the most painful parts of our past. This link between history and tourism is what Thomas’s book considers.

She explains what she means by historical memory, part of the book’s title.

“With that term I’m trying to capture the relationship and maybe even the tension between history and memory to show how they’re related, and to challenge the notion that there is the one official history. A lot depends on whose recollections are being relied on and the context of that moment in terms of which stories are told. You know, who has the right to tell the story.”

In the French Quarter with Mark Souther, a professor at Cleveland State University, we get an unexpected example. Mid-interview, Souther is approached by a man who announces himself as Dan the Shoeshine Man. He launches into his schtick, about how he’s been shining shoes for 30 years. “I come here every day, every morning,” he says.

“This day is your lucky day. You get a shoe shine by Dan the Shoeshine Man. And never stop to talk to strangers. Ask me why?”

“Why?” Souther asks. Dan responds, “because you never would’ve lost 20 bucks. Okay pay for your shine sir, thank you very much.” Souther hands over his 20 dollars.

This all happened so fast, and with finesse. Dan couldn’t be stopped. He’s a grassroots entrepreneur.

Souther agrees, but does not find Dan’s position encouraging. “Well, I actually find it sad, to be honest, because we have such a large number of people who have to resort to hustling on the streets basically just to make ends meet. So I wouldn’t say that there’s a lot of economic security in this kind of thing. It’s the crumbs of the economy. He’s picking up the crumbs under the table.”

And many people picking up those crumbs happen to be African American. The relationship between history, race, and tourism is a fraught one.

Dan the Shoeshine Man runs his operation just a few blocks from the Bourbon Orleans, a hotel located on Orleans and Bourbon streets in the Quarter. Souther explains the history of the hotel and the adjacent Orleans Ballroom, “which is a place where wealthy, well-connected white men would select mistresses who were women of color.”

These women were often referred to by the whites as quadroons, which implied that they were the light-skinned offspring of an interracial relationship.

“The quadroon balls were these occasions that were celebrated, really, by many whites, this romanticized antebellum culture. Of course it was not seen the same way by people of color. This was a place of exploitation basically—both racial and sexual in nature.”

Later, the ballroom was turned into a Catholic school for Afro-Creole girls by the Sisters of the Holy Family, one of the first orders of African-American nuns. Then, after a number of years the school eventually moved out of the Quarter. 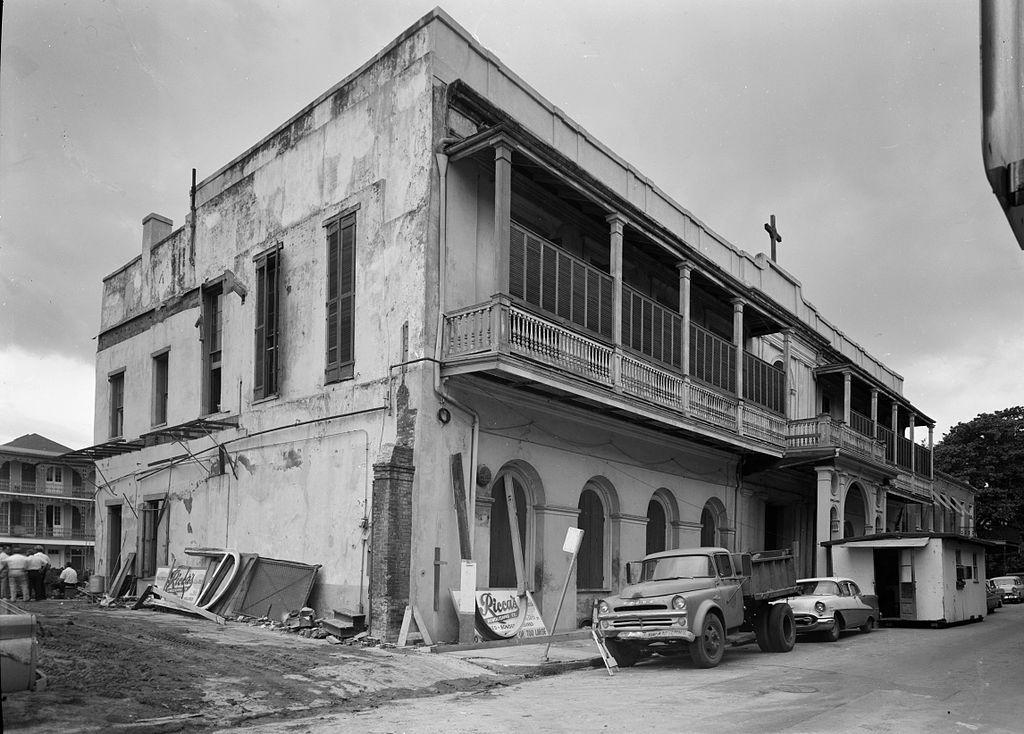 But the controversy really came up in the 1960s, Souther says, “when this Dallas developer came in and wanted to put up a hotel here. And so that raised a human cry about the Orleans Ballroom being this illustrious place in the city’s romantic history.”

Preservationists were up in arms about this site becoming a hotel. But in his research, Souther dug up archives from the black-owned Louisiana Weekly, with biting commentary criticizing the idea that this part of history should be preserved.

“They said, tear it down. Build the hotel, who cares about the Orleans Ballroom? This is just a white men’s fantasy, we don’t need that!”

Ultimately, both things happened. They built the Bourbon Orleans and preserved the ballroom, which still stands next to the hotel and is still highlighted on the hotel website history page: “Events held here were masquerade balls, carnival balls, and the forever famous Quadroon Balls, at which beautiful fair-­skinned, African-American women, or quadroons, were selected to be the mistresses of wealthy Creole gentlemen.”

The tourism infrastructure of hotels definitely provides positions for a lot of people. According to the UNO Hospitality Research Center’s Metropolitan 2014 report, about 82,000 people were working in the hospitality industry. But Lynnell Thomas says these job opportunities often replicate historic power structures and gaps in racial inequality.

“Contemporary tourism, the service industry, continues to rely on black labor that needs to be invisible, that needs oftentimes to be performative, to be complicit in the entertainment of largely white tourists and their experience in New Orleans.”

There are efforts to present alternatives to the mainstream tourism experiences, such as the Hidden History tour company, whose promotional materials say, “we take you to the places, acquaint you with the people, and share their stories that have been kept hush-hush.”

Thomas calls these unorthodox initiatives important. “I look at those moments of resistance, sometimes subtle but often powerful, that are challenging or rewriting or offering some reinterpretations of those narratives.”

There’s a market for a more inclusive presentation of history. But while the city’s mainstream message still sells its culture and obscures a more complex history, these tourist dollars come at a price.

Image from the Official Gray Line Guides of the Gray Line Motor Tours. MOLLY MITCHELL
Back
Episodes by Category