TriPod: New Orleans at 300 returns with a story about a monument that was supposed to be erected in the late 1800s, but never happened.

Recently New Orleans has been in the national spotlight over the removal of four city monuments—three statues of Confederate war heroes and one monument commemorating the Battle of Liberty Place. These monuments were erected after the end of Reconstruction, years after the Civil War, to reassert white power. But long before these monuments even went up, another monument was supposed to go up—one honoring Reconstruction’s success. But that never happened.

I spoke with a guy named Brian Mitchell. He’s an assistant professor of history at the University of Arkansas at Little Rock, but he’s from New Orleans. He told me about a guy named Oscar James Dunn.

Ever heard of him? I hadn’t either. But right around the time Dunn died, a journalist wrote, “there will be three pictures that hang in the home of every African American from that day [the day of Dunn’s death] forward. Abraham Lincoln, Frederick Douglass, and Oscar James Dunn.”

We know about honest Abe, we know about Douglass (or most of us do, including that he’s dead), but Dunn? Not so much. I wondered how Brian knew about him.

“As a child, I’d spend my days after school with my great-grandmother, and she’d tell family stories,” Brian told me. “And family stories always sort of lead to important patriarchs or matriarchs in the family. And I’m a distant relative to Oscar James Dunn.”

Dunn is Brian’s great great great-uncle. So his family talks about Dunn, and then Brian goes to elementary school.

“It was back in 1976,” Brian said. “And the teacher asked if anyone was related to anyone in Louisiana history that was famous. And I said, ‘I’m related Oscar James Dunn.’ And she said, ‘Well, who’s that?’ And I said, ‘Well, he’s the first black Lieutenant Governor, not just for Louisiana, but for the entire nation.’ And she said, ‘There’s never been a black Lieutenant Governor in Louisiana.’”

And what’s even crazier is that this man, Oscar James Dunn, is not only the first black Lieutenant Governor in the United States, he is born a slave.

Brian told me, “Dunn was born in New Orleans about 1822. He was born to a slave mother.”

Dunn’s mom falls in love with a free man of color named James Dunn, who buys her and her two kids for $800. So Dunn turns 11, and he’s free.

“That changes Dunn’s life forever,” Brian said. “It changes him from a slave to being a free person of color.”

Now Dunn can go to school, and he’s good at school. And he learns a trade—plastering—and he’s good at that too. He grows up and becomes the head of the black Masonic Lodges for Louisiana. Then, the Civil War ends and Reconstruction begins.

“African Americans are all over the South,” Brian said. “They’re released, and people need their labor for agriculture. So he [Dunn] opens an office and, what he does there is write contracts for the recently released slaves, so they can work on plantations and not be cheated.”

Basically, Dunn tries to make sure newly free people actually get paid for their labor by writing those contracts. And, no surprise, he’s good at that too, which has people around Dunn telling him he’d make a good politician. Because people of color, mainly those who were free prior to emancipation (like Dunn), are now entering politics. So Dunn runs for office and gets elected. 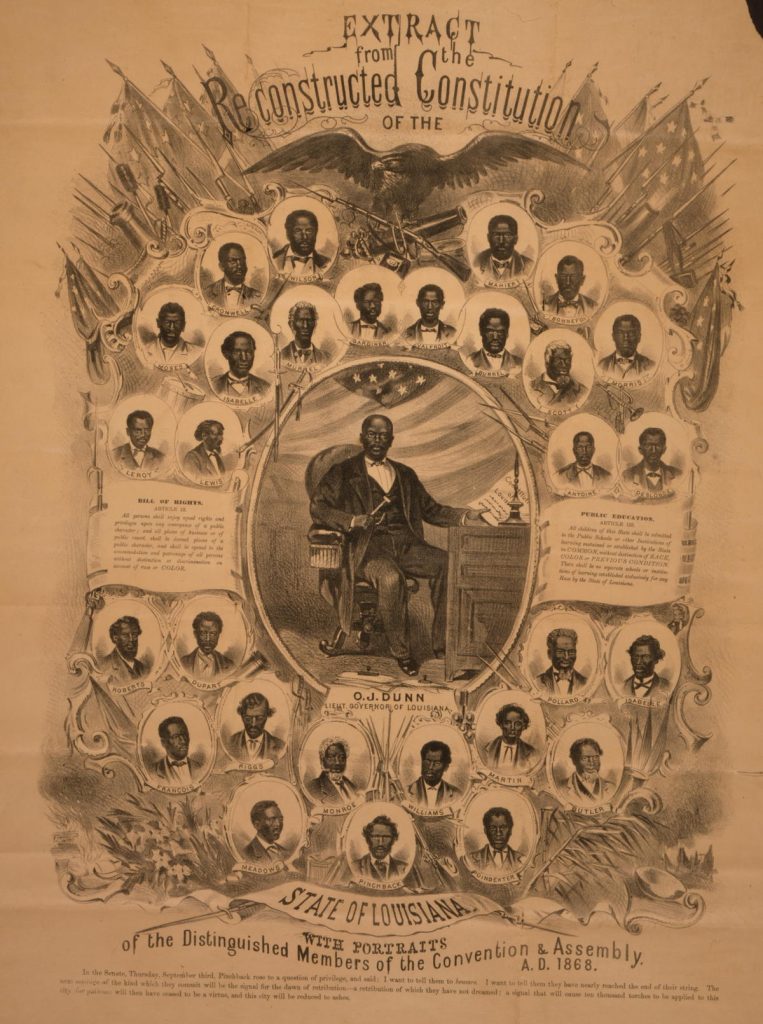 Nick Weldon works for the Historic New Orleans Collection. He discovered Oscar Dunn when he was going through the collection. “He was a Radical Republican,” Nick said. “They were the progressive party that was trying to extend civil rights to African Americans, especially in the south.”

And then there are the Democrats, the ex-Confederates and Dunn’s political rivals.

Nick found a quote in the New Orleans Times newspaper where local Democrats described their political opponent, “…the taint of honesty and of a scrupulous regard for the official properties is a serious drawback in innervating a reproach on the Lieutenant Governor.”

I asked Nick to translate.

“Basically, they’re like, he is so fair minded and scrupulous that it’s annoying,” Nick said.

His rivals can’t help but respect him—whether they like it or not. Dunn uses this bipartisan respect to advance his career and make things happen.

“He became a big proponent for universal male suffrage [the right to vote], civil rights legislation, the integration of public schools,” Nick said. “And so, he did a lot against a lot of pressure and in a pretty hostile environment.”

Hostile is one way of putting it. One could also say or, may I say, it was crazy times. Things were insane. 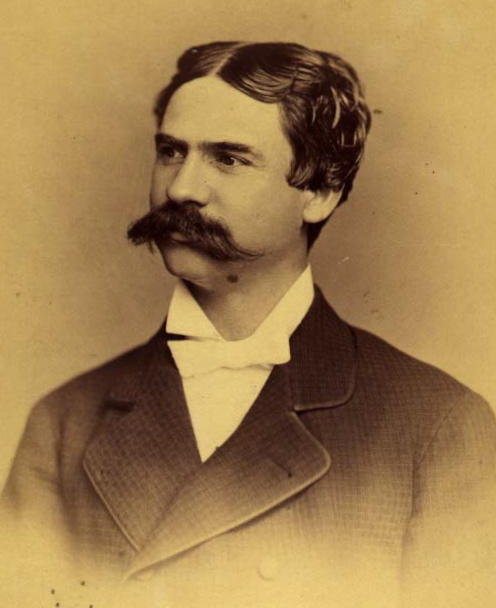 The Louisiana governor at the time is a man named Henry Warmoth—a white, 20-something Republican from New York. He and Dunn are elected on the same ticket in 1868 three years after the Civil War ends. Dunn is 20 years older than Governor Warmoth and, at first, he really believes that this young Yankee wants equality between whites and blacks, but then Governor Warmoth betrays Lieutenant Governor Dunn.

Brian told me, “When it actually came time for him to sign a bill that would protect blacks, he says no.”

When Governor Warmoth refuses to sign a civil rights bill, it divides the Republican party. There is basically a Dunn camp and a Warmoth camp. They have separate police forces, separate conventions. These are two Louisiana Republicans who are supposedly part of the same administration but are in direct competition.

Nick said, “it was complete chaos. There was no order.”

And Warmoth is losing power. The Democrats, who used to be the Confederates, won’t accept Governor Warmoth because they see him as a grade A carpetbagger. And the Radical Republicans, especially the African Americans, realize Governor Warmoth is working against their interests. The 1872 gubernatorial election is on the horizon, and there are talks of impeaching Warmoth. Meanwhile, Dunn’s career is going great! If Governor Warmoth is impeached, Dunn will become the first black United States governor ever. Rumors are flying that the president of the United States, Ulysses S. Grant, is considering Dunn for Vice President. And then, in November of 1871, Dunn goes to a dinner.

A Louisville Courier article from the day after Dunn died, talking about his connection with Ulysses S. Grant and how he may have been a candidate for the vice presidency
CREDIT NICK WELDON

“There is a public dinner that he’s invited to,” Brian said. “And thereafter he becomes very sick. And there is speculation that he may have been, as they say, dosed at that particular dinner.”

“Dunn calls a couple of his close friends in,” Brian told me, “and two days later…”

“It was a shock to the city,” Nick said. “The official cause of death was congestion of the brain and lungs.”

Meaning Oscar Dunn dies of natural causes, but a lot of people believe that’s not what happened. They look at Dunn’s death and see one thing: poison.

Nick told me that Dunn’s symptoms are consistent with arsenic poisoning—vomiting, shivering. And four out of seven doctors who examined Dunn refuse to sign off on the official cause of death. They suspect murder. But, the family refuses an autopsy.

“We really just don’t know what happened to Dunn. We don’t know if he died of natural causes, or whether he was poisoned by a rival political camp. There have been a number of papers written on Dunn’s death,” Brian said. “There have probably been more papers on Dunn’s death than on Dunn’s life.”

So Dunn dies at the age of 49. It’s 1871, the peak of his political career. The city and country are both in shock. People show up to pay their respects.

“Over 50,000 people turned out for the funeral. It’s called the largest in New Orleans’ history,” Brian told me. “The composition of the crowd was made up of every facet of New Orleans society, black and white. And I always point out that it’s probably one of the oldest second lines in New Orleans history. There are jazz bands there.”

The mourners include most of Dunn’s political rivals, the men who may have poisoned him. And Governor Warmoth, of all people, is a pallbearer. The second line stretches a mile long, from the intersection of Claiborne and Canal (where Dunn’s house is) to Magazine Street. After that, it proceeds to the St Louis #2 Cemetery.

“So yeah,” Brian said. “To say he was well loved in the city would have been an understatement.”

Which brings me back to that monument—the one I mentioned at the beginning of this story, the monument that never materialized—that was meant for Oscar Dunn.

Nick told me about Louisiana Legislature Act number 57. This act dedicates $10,000 for Dunn’s monument, which is a lot of money back then. A couple hundred G’s in today’s money. Money never spent. We still don’t even really know why.

So mystery number one: dude dies unexpectedly. Mystery number two: an act is signed by the Governor of Louisiana, and $10,000 is allotted for the erection of this monument that never gets built.

While people are writing legislation to memorialize Dunn in a monument, Brian found evidence of a movement to discredit Dunn. Brian found an old drawing from that time of a Mardi Gras ball held by the Krewe of Comus. “They had an elaborate ball and in the center of the ball was the King dressed as an ape.”

It was a massive gorilla costume that the King of Comus wears, saying, “the first black Lieutenant Governor of Louisiana was an ape.”

“And I argue,” Brian said, “that it’s at that point that revisionists start trying to take over the narrative and rewrite Dunn as a villain instead of a hero in American history.”

And that has a pretty fast domino effect.

Nick explained. “When you see this somewhat rising African-American political star at a time of all this strife…the guy dies and pretty much with him all of the gains that he had fought for: civil rights, suffrage, integration in public schools. Reconstruction started to go away after that. At the same time, the Ku Klux Klan is just getting started. The White League is just getting started.”

“By taking down Dunn they were able to reinforce notions of black inferiority in Louisiana,” Brian said.

So 20 years after Dunn dies, instead of building a monument for a former slave who was on his way to being Veep, the Liberty Place monument goes up to honor an attack by a white supremacist group—the Crescent City White League—against an integrated government and their integrated police force. 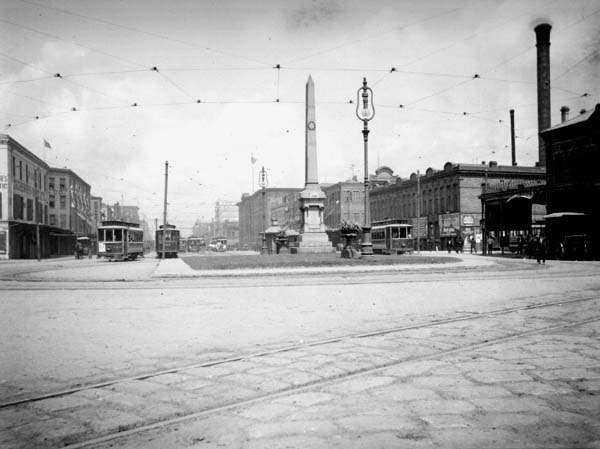 The Monument to the Battle of Liberty Place in its original location on Canal Street, 1906
CREDIT WIKIMEDIA COMMONS

One hundred years later, Dunn’s descendant, Brian Mitchell, goes to elementary school in New Orleans, and his teacher tells him that Louisiana never had a black lieutenant governor. “My entire life I went to classes, and I loved history. And I heard about Manifest Destiny and I heard about the melting pot, and none of these things seem to explain my condition as an African American in the United States,” Brian said. “But Dunn did.”

I asked him, “do you think if there had been a monument to Dunn, more people would know who he was today?”

TriPod is a production of WWNO, with support from the Historic New Orleans Collection and the Midlo Center for New Orleans Studies. Special thanks to editor Eve Abrams, the entire TriPod editorial committee, and research assistant Ann Hackett.  Subscribe to the podcast!