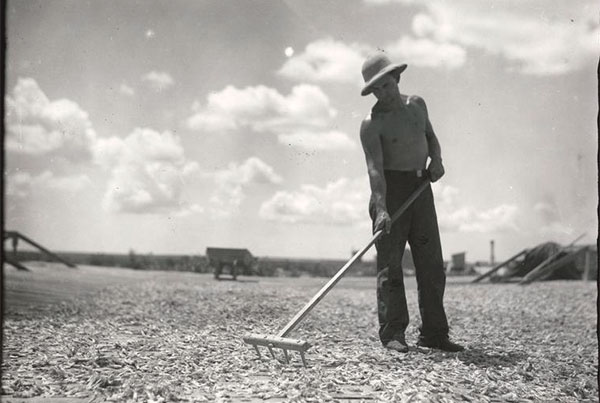 This is the second episode of TriPod: New Orleans at 300. Tri (for the city’s three centuries) Pod (for podcast), and Tripod, the tool that steadies an image when you capture something. TriPod moves beyond the familiar themes of New Orleans history to focus on the forgotten, neglected, or surprising. It helps us better understand present and future challenges. This is the story of one man’s family business, part of the Chinese immigrant community, that helped build New Orleans.

Don Davis is a Sea Grant scholar, cultural geographer, and professor at LSU. He drives around the French Quarter looking for what used to be called the Quong Sun Company, a Chinese export business that operated on St. Louis Street for more than 50 years. 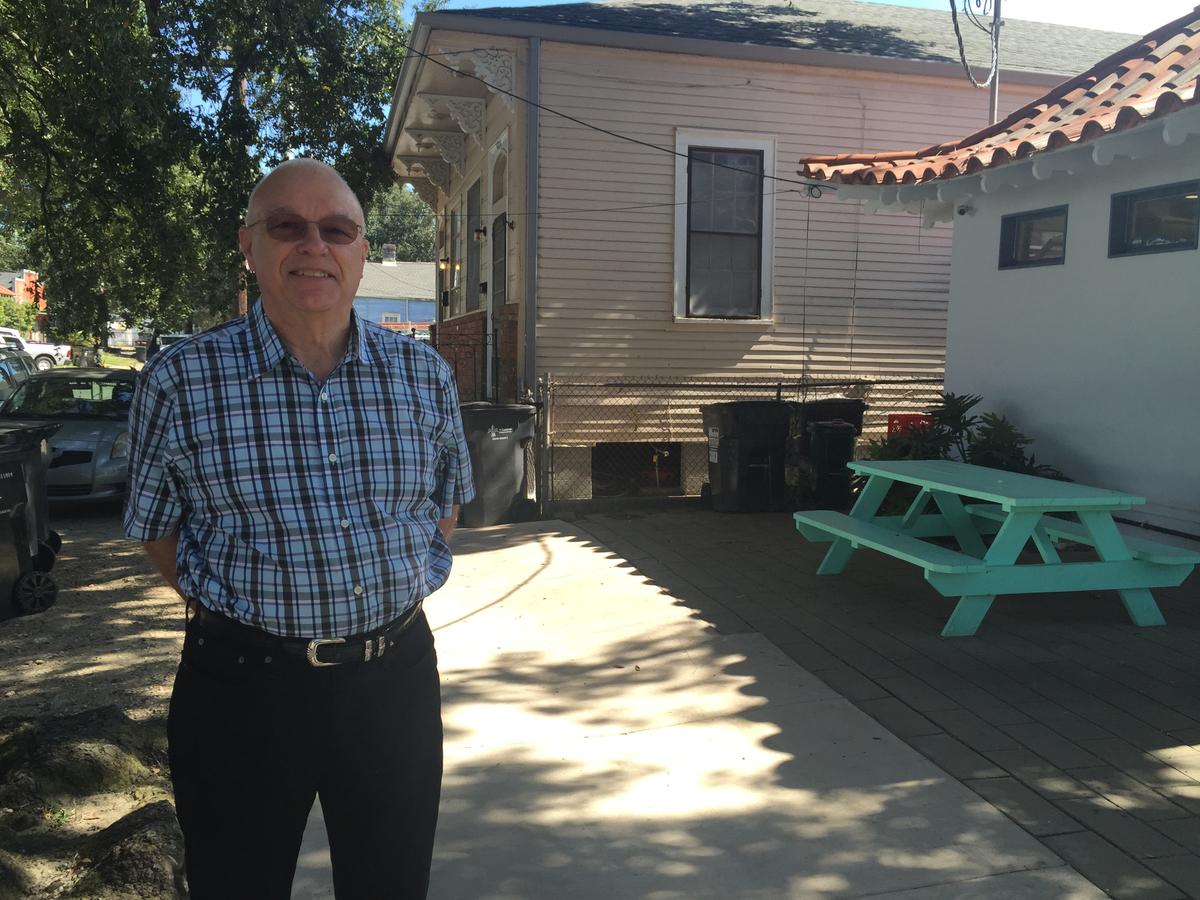 Davis is an environmental scientist, but he’s passionate about a lot of other things, such as immigration—specifically Chinese immigrants and how they got to New Orleans.

The Chinese helped build the American West. They came to California in the mid-19th Century to cash in on the work that came with the gold rush and laying down the transcontinental railroads.

But in the late 19th Century, most people that moved from the Canton region to San Francisco went into the fishing industry.

“They were very efficient fishermen,” Davis says, navigating his Toyota Avalon down Decatur Street. “They were so successful that a number of species went extinct in the San Francisco Bay. When that area was over-exploited, fishermen knew there were other areas. So they came to Louisiana to discover the wetlands.”

Other Chinese headed South after the Civil War, for reasons having nothing to do with fishing. Slaves were emancipated, which meant there were job openings on plantations. So lot of Chinese served as cheap labor for sugar planters and the like. Americans didn’t seem to have a problem with any of this until they started feeling territorial over their jobs.

“You have to remember, because of the Exclusion Act of 1882-1943, for 61 years, you could not immigrate into this country if you were Chinese,” Davis says.

This was the first law that denied entry to a specific ethnic group trying to immigrate to the United States. It was targeted towards laborers, and you can imagine how hard it was to convince the U.S. government that you were not heading to America for work.

So it was illegal to come here, but that doesn’t mean people weren’t doing it, which is why a lot of these Chinese went to live and work in the wetlands. Literally, says Davis.

“They discovered that they could go out in the wetlands and build a platform and basically be isolated,” he says. “Out of sight, out of mind. You’re not gonna find them!” 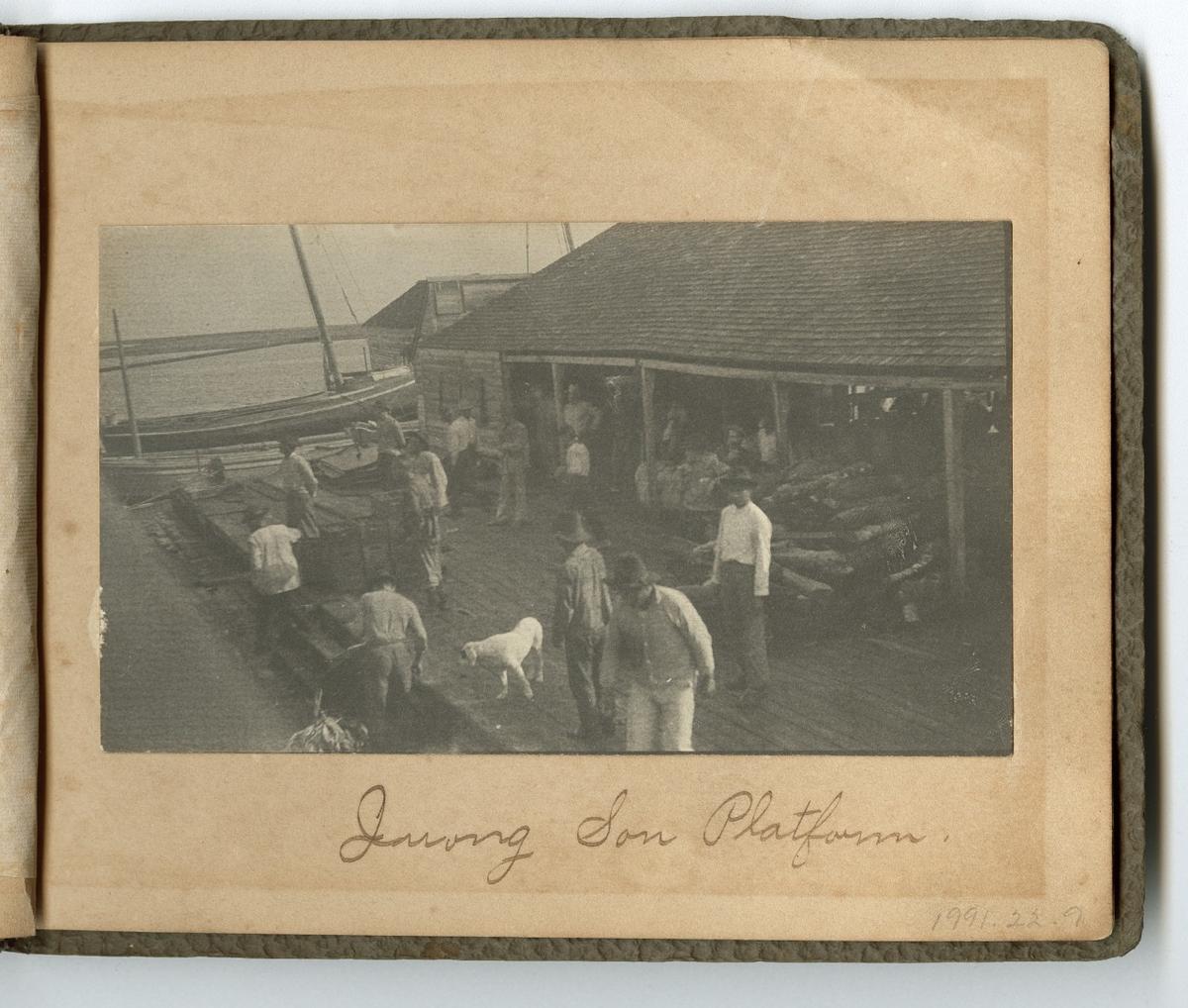 By the 1870s, there was an entire world of shrimp-drying platforms. These Chinese fishermen built dozens of huge wooden decks—two to three football fields in size—that were raised up just on stilts, about four feet above the marsh. The best known was Manilla Village, in Jefferson Parish, but there were more than 100 platforms built out in Barataria Bay over almost a century.

A lot of the workers out there on the platforms, drying the shrimp, didn’t end up there by choice. They were shanghaied.

Don explained that there were people whose job it was to recruit people who were already drunk on wine. “The next thing you know, they’re in a boat, they end up on one of these platforms, and there’s no way off. They don’t have an iPhone—this isn’t the 21st Century! It’s the 1800s!”

And the work was tough. The platforms were tilted, with high and low points. Shrimp was caught in hand-held nets, immediately boiled, and then dumped out on the platforms to sun-dry for a couple days.

But rain comes any day, any time around here, making it a rat race to cover and uncover the shrimp constantly. Once the shrimp were finally dry, workers put burlap sacks on their feet and danced on the shrimp to shake off the shells. Then, the dried product was sent to the Quong Sun Company.

It is interesting to note that Chin Dy Hoy came to the United States from Canton at the turn of the 20th Century, with the Exclusion Act still in full effect. So Bob’s dad is a perfect example of someone who got around this restriction, somehow or other, which may be one reason Bob doesn’t know so much about his family history. His dad never talked about it, or anything, really.

“He rarely said anything, except ‘go study,’ or something to that effect,” Bob remembers.  “So I would say, ‘no’. We weren’t real close—Oriental families are a little strange like that.”

What Bob does know is that his dad formed Quong Sun, managed the shrimp drying platforms from afar, packaged the shrimp in 200 pound barrels, and shipped it off to China. Today, a lot of the shrimp we Americans eat is from China. But back then the Chinese came here to catch and dry shrimp to send to their homeland. Dried shrimp was truly the first international market for a Louisiana product, thanks to the Chinese. 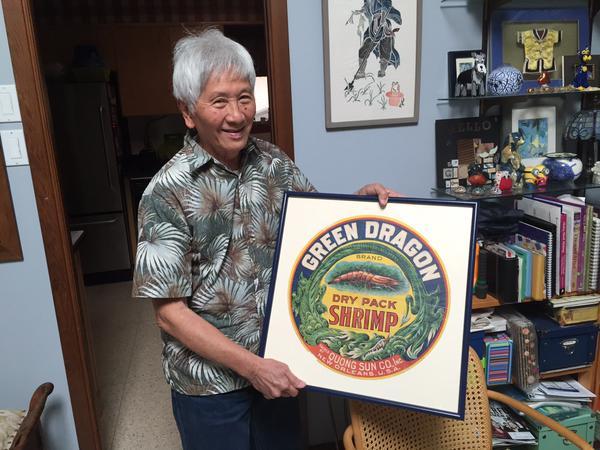 Bob Hoy in his home, holding a framed Green Dragon Brand dried shrimp label. The Quong Sun Company sealed their barrels with these labels, and this is one of the only ones left.
CREDIT LAINE KAPLAN-LEVENSON / WWNO

The Quong Sun Company also sold wholesale to China towns in New York, California, even Hawaii. But Bob’s dad wanted to reach non-Chinese buyers. So during the Second World War, Quong Sun became Gulf Food Products. It doesn’t get more generic than that, which Don Davis says was the point. “You have to Americanize. What we got here is marketing.”

While Bob’s dad ran Gulf Food Products, Bob went to Warren Easton High School, an all-boys, segregated school at the time. He then went on to Tulane: got his BA, MA, and PhD in Physics; did a short stint in the ROTC; returned to New Orleans to work for Chrysler; and then got a teaching gig at the University of New Orleans.

But then, Hoy’s dad died. This was in the mid-1970s. The shrimp drying platforms were gone by this point, because in the 1950s they started using machines indoors instead of the sun. Bob says he didn’t know anything about how to run the business, but “it’s not rocket science, so it was a fairly easy transition.” He should know, since he also does rocket science.

Bob Hoy ran his father’s company until the early 2000s, when he retired and sold it. It still operates today out in Jefferson Parish as Gulf Food Products. There are a few traces of Chinese culture around New Orleans—a few tombs, some old laundry buildings, the still operating Q Lee Laundry on Basin Street—but there is no trace of Quong Sun at the original dried shrimp building in the French Quarter. And out in Barataria Bay? Maybe you’ll see a few lingering pilings, but that’s it in terms of the platforms. There’s really only…Bob.