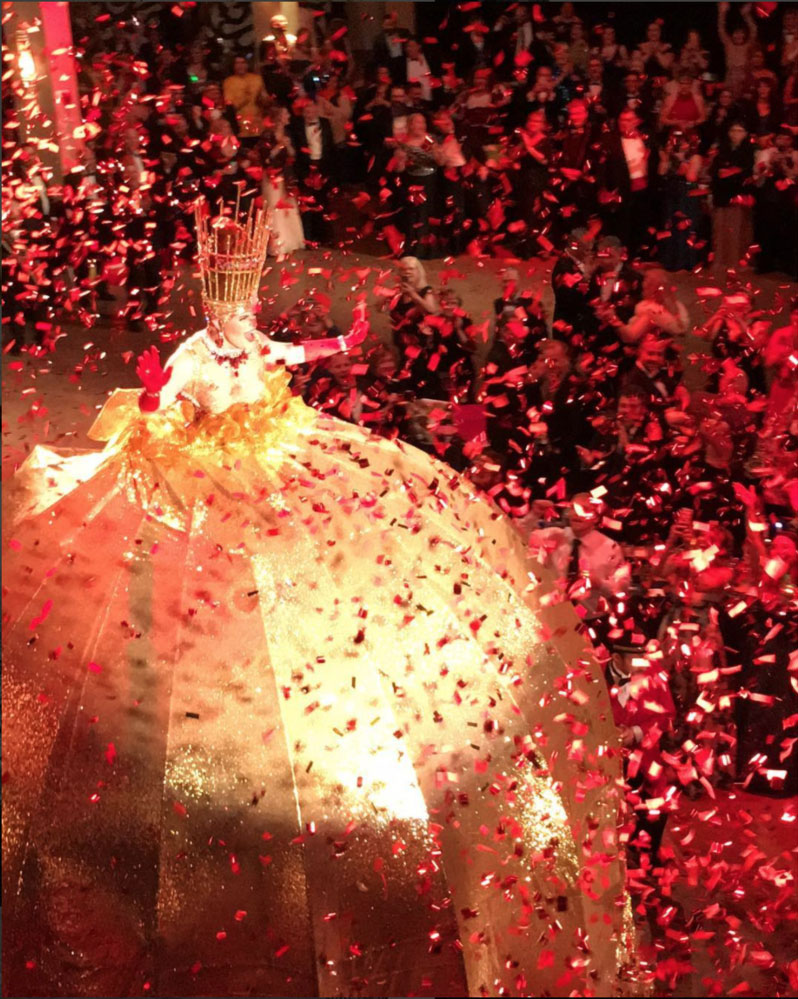 TriPod: New Orleans at 300 returns with a look at the once secret history of Gay Carnival krewes.  Note: this episode contains a racially insensitive word that may offend some listeners. We have included it for context.

Barrett Delong Church is showing me a giant flamingo Mardi Gras float that his husband will be riding on in the Krewe of Armeinius den. Armeinius is an all male, gay krewe, and it celebrated its 50th anniversary this year. I met Barrett, this year’s krewe captain, at their den the day before their big ball. This year’s theme?

300 years of fabulous. Obviously what I should have called TriPod. “Oh tomorrow is going to be incredible,” Church said. 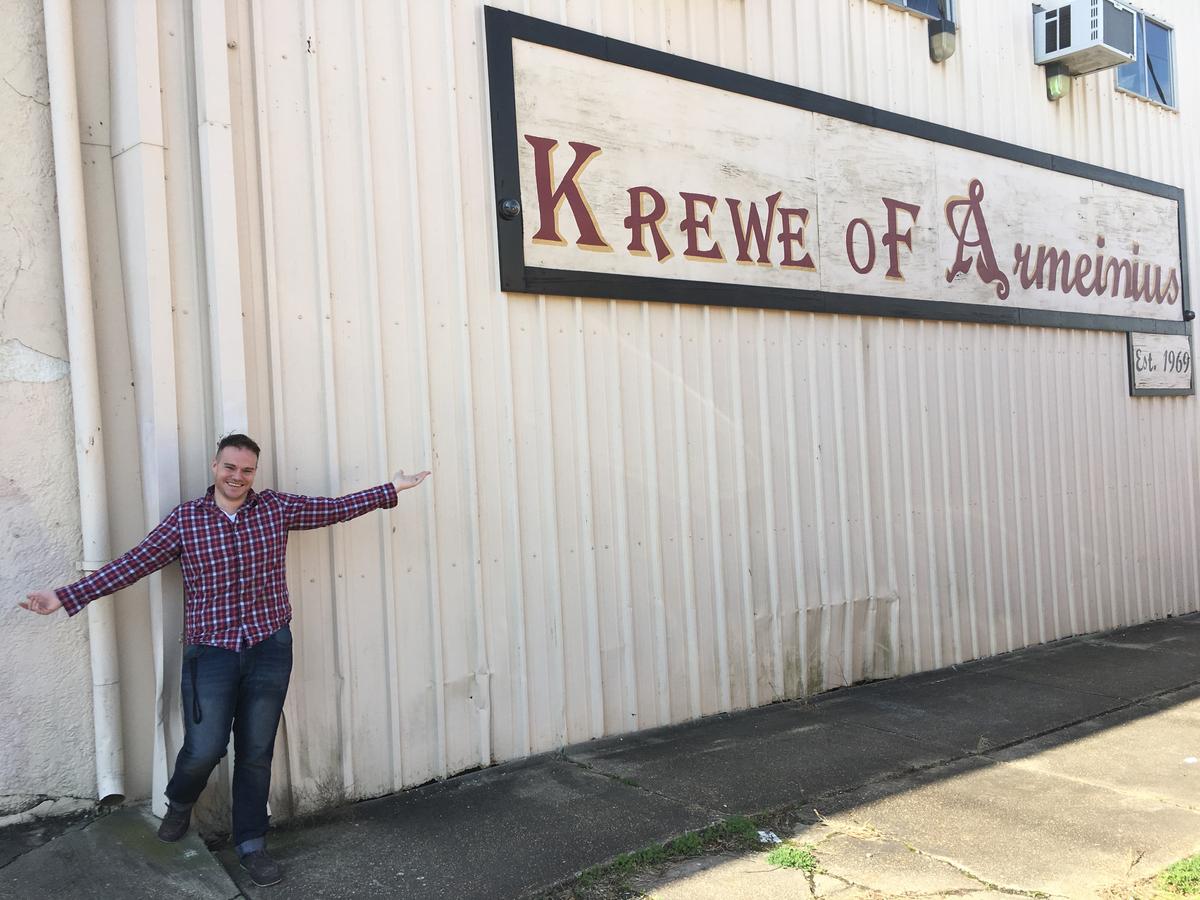 And it was. I was there. The ball was held at Mardi Gras World. Hundreds of people showed up, many in black tie, to see these flamboyant costumes in action. People sat in tuxes and gowns at tables, picking at cheese plates and pounding drinks, as krewe members pranced around the space, one by one, blowing kisses to the cheering crowds from inside their flamingoes, streetcars, you name it. When the queen came out, rose-petal-like confetti fell from the ceiling. It was a sight to behold.

Armeinius is one of just a handful of gay krewes that still holds an annual ball. But decades ago, at one given time, there were more than 20 gay krewes. These krewes, and krewe members, pioneered this art form, the Gay Carnival ball, back when it was, essentially, a crime.

In the earliest written record of Carnival in New Orleans, back in 1730, a young French clerk named Marc-Antoine Caillot described dressing up as a shepherdess, “complete with beauty marks and plumped-up breasts.” Whether he called it drag or not, that’s what these 18th century party animals were doing. Then, in 1805, a new anti-sodomy law passed. Gay culture went largely underground, and so did Gay Carnival. Howard Smith says you couldn’t hold hands with someone of the same sex. You couldn’t dance with someone of the same sex. You couldn’t dress in drag! But there was one exception…Mardi Gras Day.

“You can’t arrest someone because they’re in costume on Mardi Gras Day, and so they gayed it up,” Smith explained. 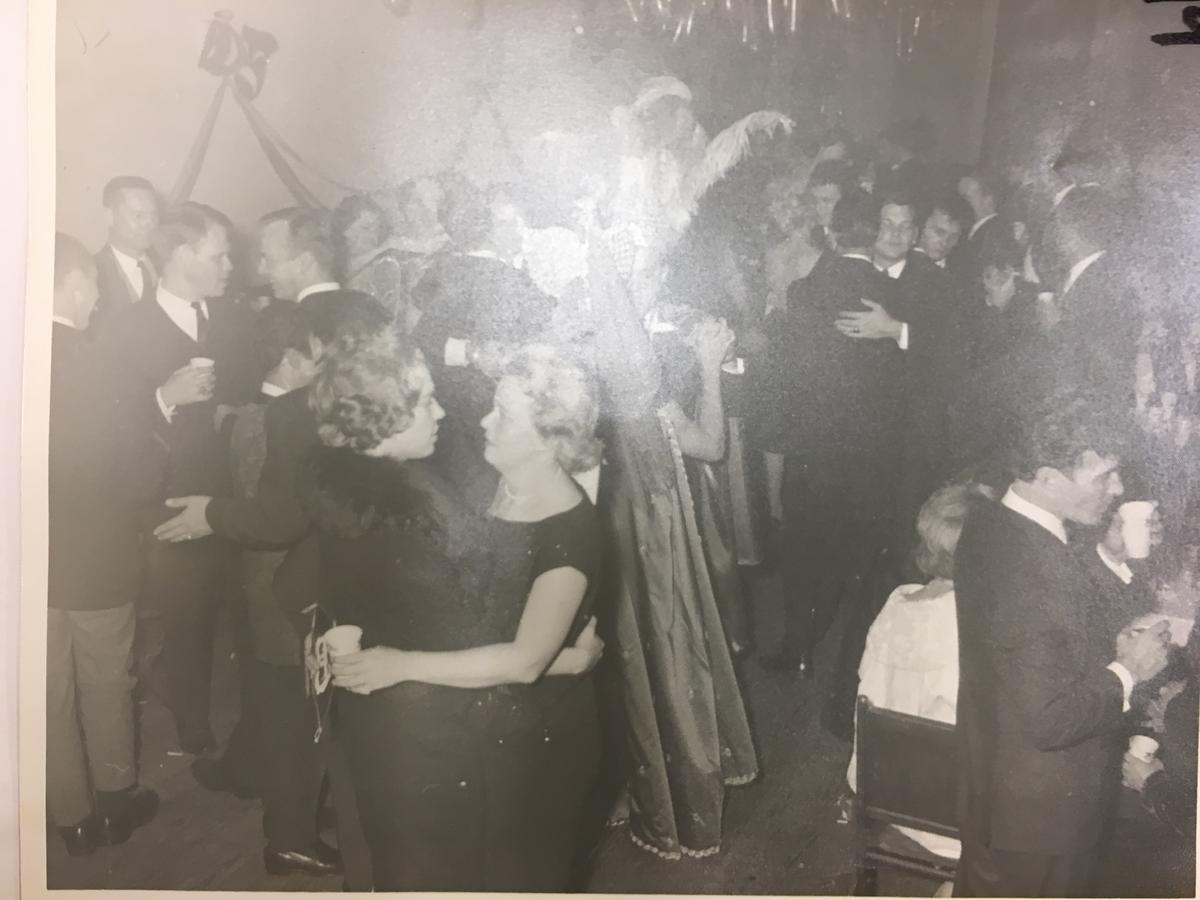 The first gay krewe in New Orleans formed in 1958, in the wake of McCarthyism and the Lavender Scare, a witch hunt against gay people in the government. The krewe called itself the Krewe of Yuga. And Howard says this may just be lore, but it’s possible that Yuga was a play on asking, shorthand, if someone was gay—secret language to find out, safely, if someone else was gay. Yuga? You gay?

“I hope it’s true,” Smith said with a chuckle.

Safe words and secret languages, that’s part of what these krewes were. More than just entertainment, they were places of refuge for the gay community. And a place for networking, much like benevolent societies and social aid and pleasure clubs. Here’s where you found your doctor, your lawyer, if you were lucky, you’re employer. And your friends.

And so one of the first big challenges for the Krewe of Yuga was finding a physical safe space for their first ball. They held it in one of the krewe member’s homes on Carrollton Avenue. It was held there again the next year, in 1959, and more than 200 people showed up. It was clear Yuga needed to find a real venue. They bounced around for the next couple of years, and then landed a spot in Metairie.

“And that sort of worked for a couple of years. But then they had the raid,” Smith said.

The raid, with police on horseback, the canine unit. All of it. The result? 1962 marked the fifth and final ball for the Krewe of Yuga.

“The police received a phone call from an irate citizen supposedly complaining about this lewd party that was going on there. The Jefferson Parish police came in full force. Almost 100 people were arrested. Their names were printed in the newspaper, which was a point of shame for so many years,” Smith said.

Many of the krewe members were in the closet at the time; some were married and had families.

“We were terrorized. A lot of us lost our jobs. And we just, we couldn’t handle it,” the head of Yuga said when Smith interviewed him about the incident. 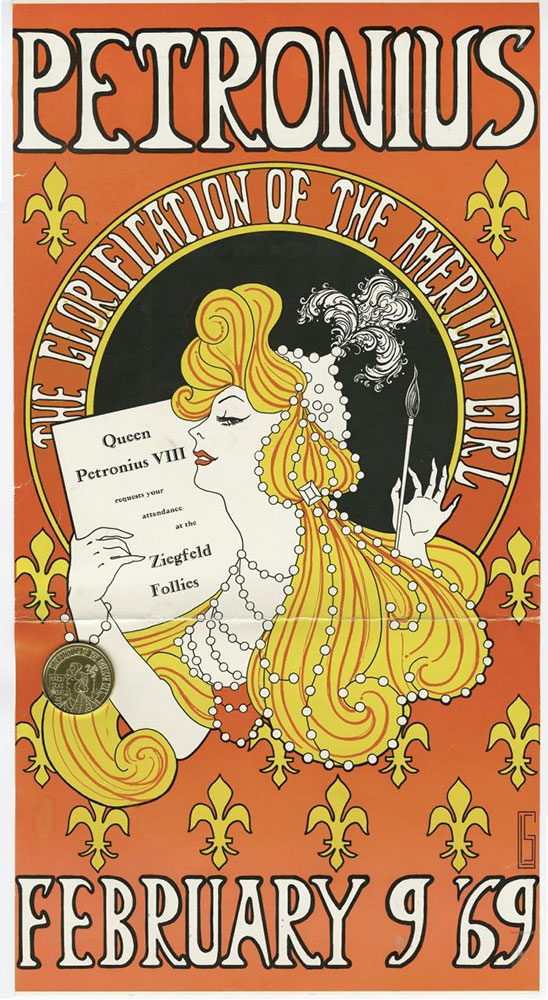 The Krewe folded. But another gay krewe had formed, the Krewe of Petronius, and they continued on, despite the fears of being raided the way Yuga was. They just needed to find a place where they knew they’d be safe. And who would’ve thought it’d be the Saint Bernard Civic Auditorium…in Chalmette.

“You have the Saint Bernard police there, directing traffic, helping these drag queens with these costumes cross Judge Perez Drive. Now that’s something you don’t see often because you know, that’s not the most liberal parish,” Smith said.

The fact that Chalmette became the mecca for Gay Carnival balls may sound insane, but legend has it that somebody had dirt on somebody, and so Petronius was able to blackmail and pay their way in, in 1960. And once they got their foot in the door, more krewes emerged, knowing there was a safe space for their balls…and everybody went to everybody’s balls.

Diane Dimaselli, Lou Bernard, and Michael Hickerson, aka Fish, have known each other for more than thirty years. They’re all former gay krewe founders. We met at the Friendly Bar in the Marigny, where they reminisced. Dimaselli said, “a lot of cities, you know, put everything into gay pride because that’s what they have. Well, we have Mardi Gras.” 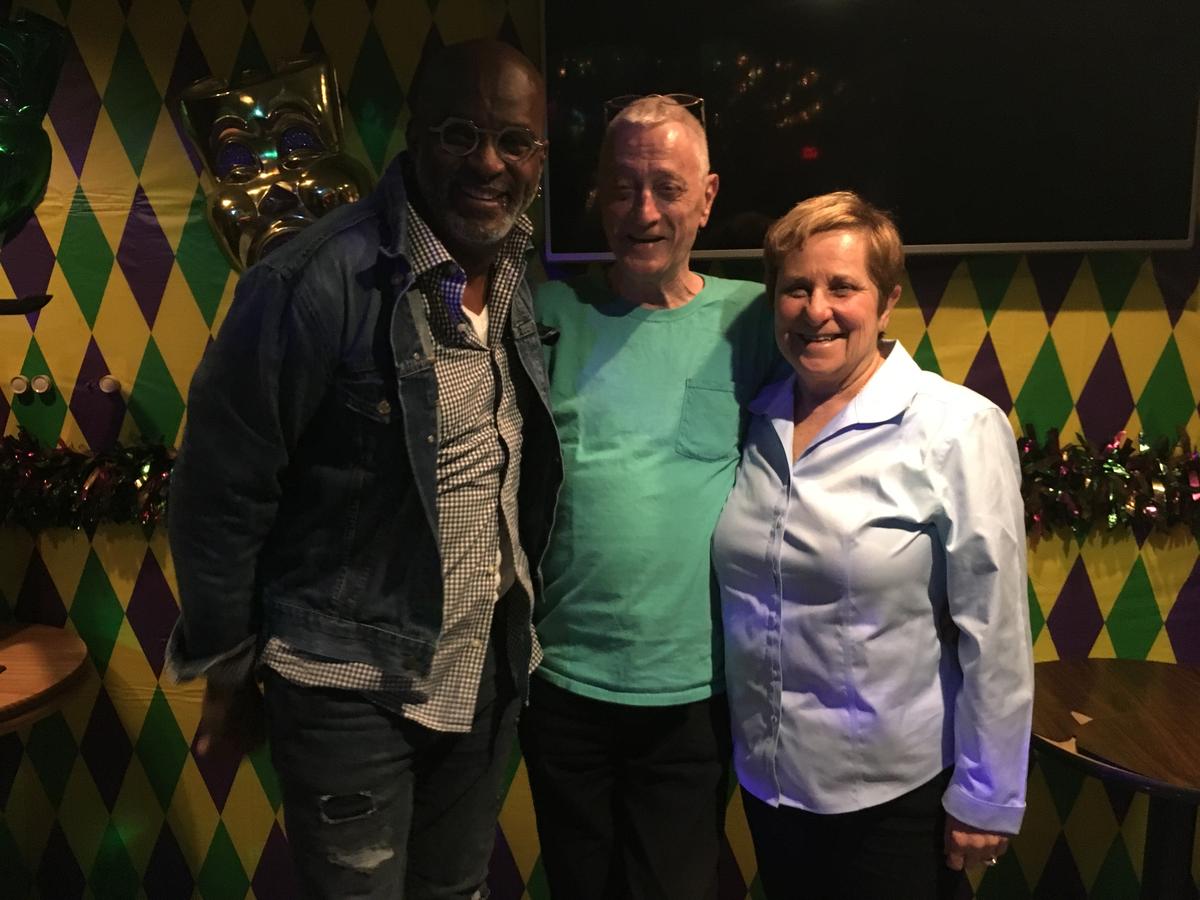 She co-founded the Krewe of Ishtar, the only gay woman’s krewe. Women weren’t allowed in krewes, and many didn’t feel welcome in gay bars. There was a big gender divide in the gay community, so Ishtar formed in 1980 as a space for women to participate in Gay Carnival. But after five years, they starting bickering and fighting, so they broke up.

“There were no more girls krewes. Ishtar was the only woman’s krewe, period,” Dimaselli said.

Michael Hickerson, aka Fish, also founded a krewe, called Polyphemus. He did so after an experience he had joining a different gay krewe called Amon-Ra.

“When I went to join the Krewe of Amon-Ra, a third of the organization left,” Fish said.

They left because Fish is black. This is one of many experiences Fish can recall of being discriminated against within the gay community. Even in the Friendly Bar, where we sat talking. He remembers an after party that took place decades ago at the Friendly Bar, after the Krewe of Amon-Ra’s ball.

“It was the president and the reigning queen—they were in that bathroom. And I opened the door to go pee. And the president said ‘close that door, nigga,’” he said.

This was the late 80s. Fish was on the krewe’s board.

Despite the problematic gender and racial dynamics within the gay community, everyone I spoke to still saw the 80s as the golden age; gay Mardi Gras was hitting its peak. There were more than 20 krewes, each with dozens of members. Laws that targeted gay men were, for the most part, no longer being enforced. The New Orleans gay scene, and gay Mardi Gras, was thriving. But suddenly, Diane told me, this golden age turned into the dark age…with AIDS.

Dimaselli said, “guys just died. I mean every weekend it was just on and on and on. I would walk down the street and pass up somebody, and they would come back and say, ‘Diane, You didn’t say hello.’ It was because I didn’t even recognize them.”

Krewes were literally dying. And all the fundraising that had been going into costume glory was suddenly being re-allocated for AIDS research, medication, hospice. And when krewes did continue to spend money on lavish balls, they were criticized. Lou Bernard, founder of the Krewe of Olympus, explained. “The Krewe of Olympus got heavily criticized for raising money for people to come watch us wear beautiful costumes and stuff,” Bernard said. “And somebody said, don’t you think you should be raising that money for AIDS? I said, darling, don’t you think the living still have to enjoy life? They said, how how can you even think of letting people raise money so you can put your goddamn costume on when people are dying? And I said, well, darling, not everybody’s dying.”

Bernard said it was an act of resistance to continue to hold the balls, to get dressed up, and live life. Still, he estimates that AIDS wiped out Gay Carnival krewes by about 50 percent, in just a few years. And many of the survivors decided they needed to save their money in case they, too, became HIV positive.

Gay Carnival never bounced back after the impacts of the AIDS epidemic. A long list of roughly 20 krewes dropped to just a few. Today, only four original krewes are still active. A few new krewes have started up in the past few years, but Diane, Lou, and Fish think Gay Carnival may be on its way out, that there’s less of a need for it.

“You know, we endured all of this in our life so that this generation could do what they are doing today,” Dimaselli said.

Let’s be clear—LGBTQ folks still face discrimination every day. And that anti-sodomy law, passed in 1805, is still on the books. As recently as 2014, the state legislature voted not to remove it. Barrett Delong of the Krewe of Armeinius knows this all too well but recognizes the rights he’s gained as a gay man thanks to the sacrifices made by the people before him…like Lou and Fish and Diane. That’s why he’s committed to keeping his krewe going…to honor the pioneers of gay rights in New Orleans. He says what was once mostly about survival is now about tradition.

Church said, “our krewe at one time was a social club just for gay men to have safe refuge. That’s where you met. That’s your doctor. That was your lawyer. We had to change from being just a social club, because we don’t need that anymore; that’s not a need of the community. We’re a preservation society. All the krewes left; we preserve what these men did. Because the show goes on.”

Which is also why Howard Smith wrote his book.

“When people talk about the history of Carnival, they have to talk about Gay Carnival now, because here’s all this evidence,” Smith said. “It’s not just a paragraph or a mention in some of the history books, despite all the harassment, despite all of the social negativity for being gay. Here it is, you have to deal with it.”

TriPod is a production of WWNO, with support from the Historic New Orleans Collection and the Midlo Center for New Orleans Studies. Special thanks to editor Eve Abrams and the entire TriPod editorial committee.  Subscribe to the podcast!

The Queen of the 2018 Krewe of Armenius Ball, as the Krewe celebrated their 50th anniversary. LAINE KAPLAN-LEVENSON
Back
Episodes by Category