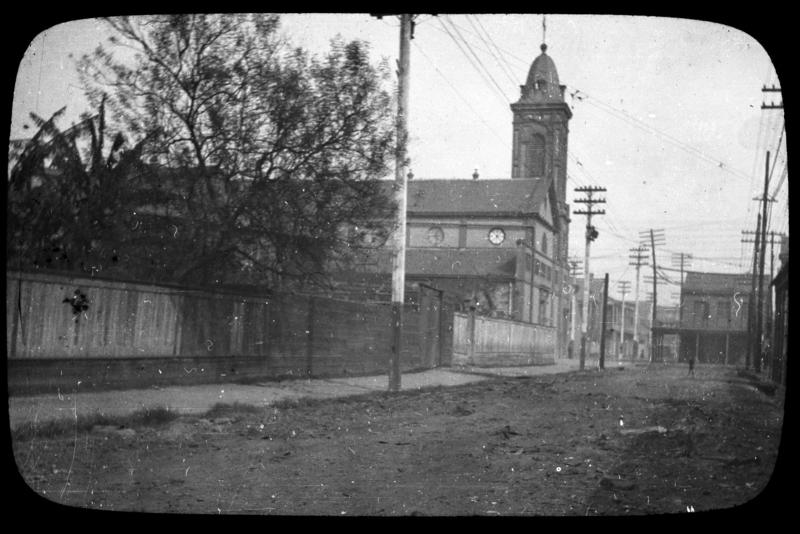 This is a special edition of TriPod New Orleans at 300. Producer Laine Kaplan-Levenson handed the mic over to the New Orleans Scholars, a group of students from Metairie Park Country Day and Benjamin Franklin High Schools. Each semester they collaborate with a community group to explore a local challenge: economic, environmental, political, and historical.

Here, the students examine the St. Augustine Church. It is determined to stay true to its founding principles in a time when racial unity is at the forefront of national discourse.

Martin Luther King, Jr. spoke on Meet The Press on April 17th, 1960, addressing the reality of church segregation in America.

In the speech, he declared, “I think it is one of the tragedies of our nation, one of the shameful tragedies that 11:00 on Sunday morning is one of the most segregated hours, if not the most segregated hour, in Christian America. I definitely think the Christian church should be integrated, and any church that stands against integration and that has a segregated body is standing against the spirit and the teachings of Jesus Christ, and it fails to be a true witness.”

As New Orleans Scholars, one way that we take on today’s local issues in the community is by looking into the backstory. And we’ve been talking a lot about race relations in New Orleans, which led us to the St. Augustine Church.

Interior view of an empty church and altar, identified as St. Augustine Church at 1210 Governor Nicholls Street. This photo was taken as a memento for the sixth pastor of the church, Father Joseph Subileau. Credit Historic New Orleans Collection 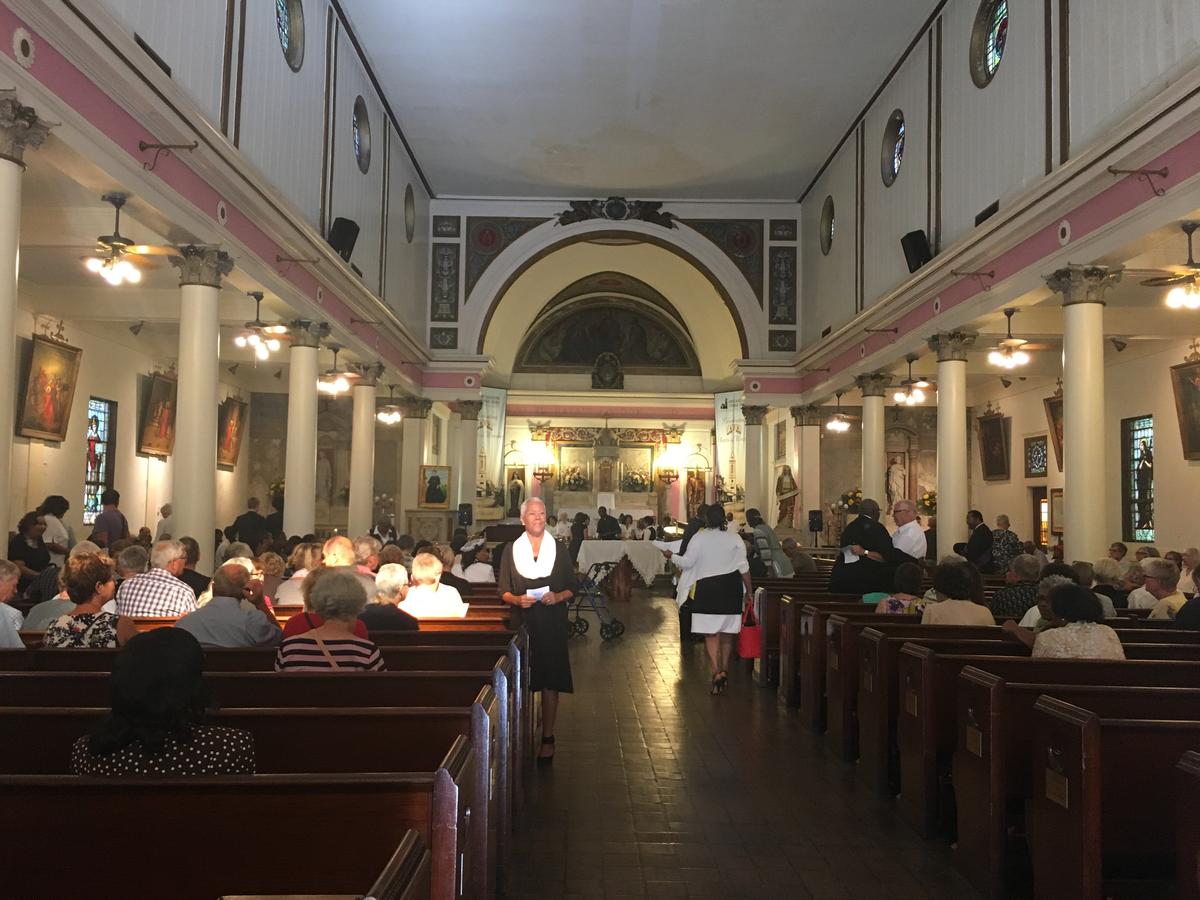 An interior of the St. Augustine Church during the 175th Anniversary Mass in 2016.
CREDIT REINA PROTZEL / WWNO

In October, we went to the St. Augustine Catholic Church in Treme, because they were celebrating their 175th anniversary. There’s a lot to celebrate. Before the Civil War, St. Augustine Church might have been the most integrated congregation in the country. 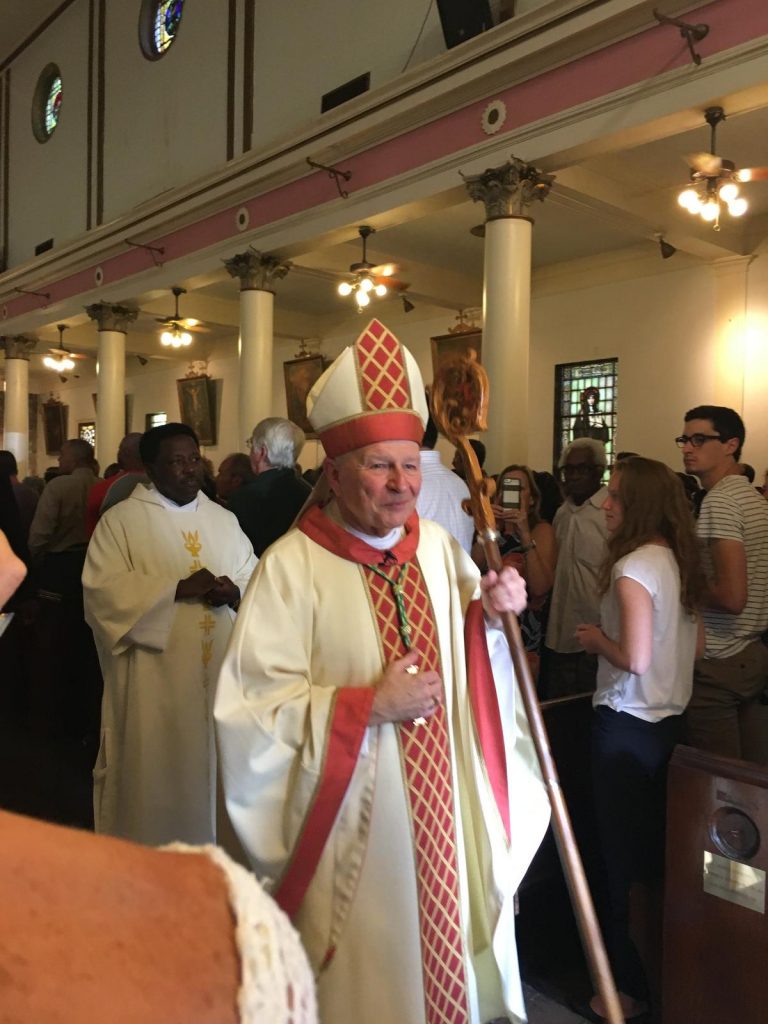 Archbishop Gregory Aymond referred to this when officiating the anniversary mass. “The doors of this church have been open for 175 years, and the openness of those doors says to those who pass by, all are welcome. That is very much of the tradition of St. Augustine parish.”

The church we saw that Sunday morning looked nothing like the church that Martin Luther King, Jr. saw back in 1960. Looking around, there were all different types of people—black, white, young, old. And everyone seemed to know each other well.

During the sign of peace, when people usually say hi to the neighbor on either side of them, the congregation walked around hugging everyone. It took a good ten minutes.

As newcomers to the church, we wanted to learn how and why the church was so interracial. So we went straight to the members of the congregation to hear about this diverse culture. That’s how we met Marge Pallatu.

“One of the things I most love here is, parishioner-wise, we’re interracial, and we get to know each other.”

Marge grew up in Metairie attending all white churches.

“In the white churches, you know, when I was going there, we didn’t clap, and we didn’t go around and hug and take 15 minutes for a peace greeting.”

She grew up going to church with people for years who she never spoke to. Then she heard about St. Augustine and was attracted to what she calls a church family.

“When I first heard this, that a black church calls themselves a church family, I was like, that is so beautiful! Because what I grew up in, you know, it was like folks would go to church and pray to God, but it wasn’t coming together, as a people.” 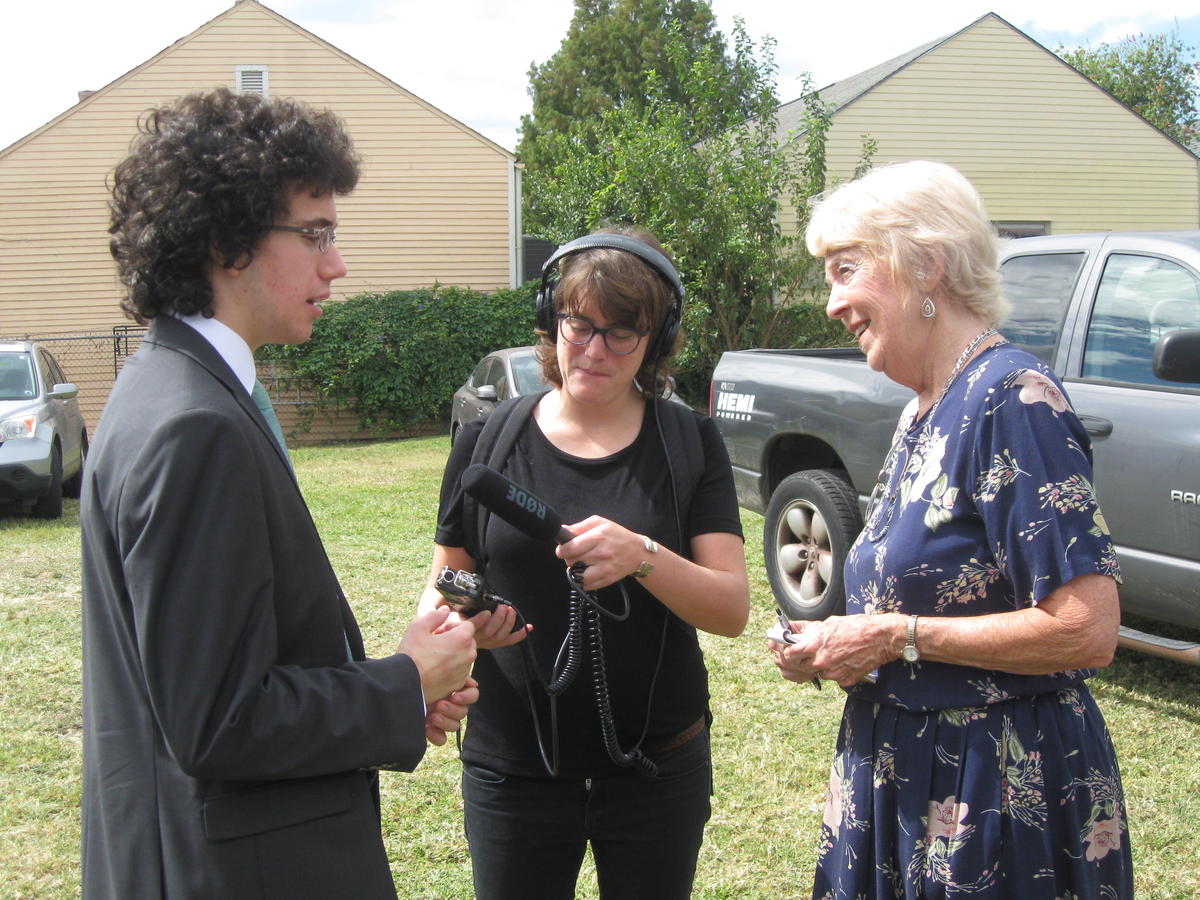 This interracial church opened her eyes up to a lot more than religion. Marge realized that until she started going to St. Augustine, she hadn’t spent much time with that many black people. And up until that point, her perception of other races was based on the media.

“One of the things that dawned on me after I was here for some years is that it’s stereotypes that keep people apart, races apart, because we do, we see on TV primarily the violence that goes on.”

She says she would have never met someone like Danzel Square, who’s been a part of the St. Augustine church family his entire life. 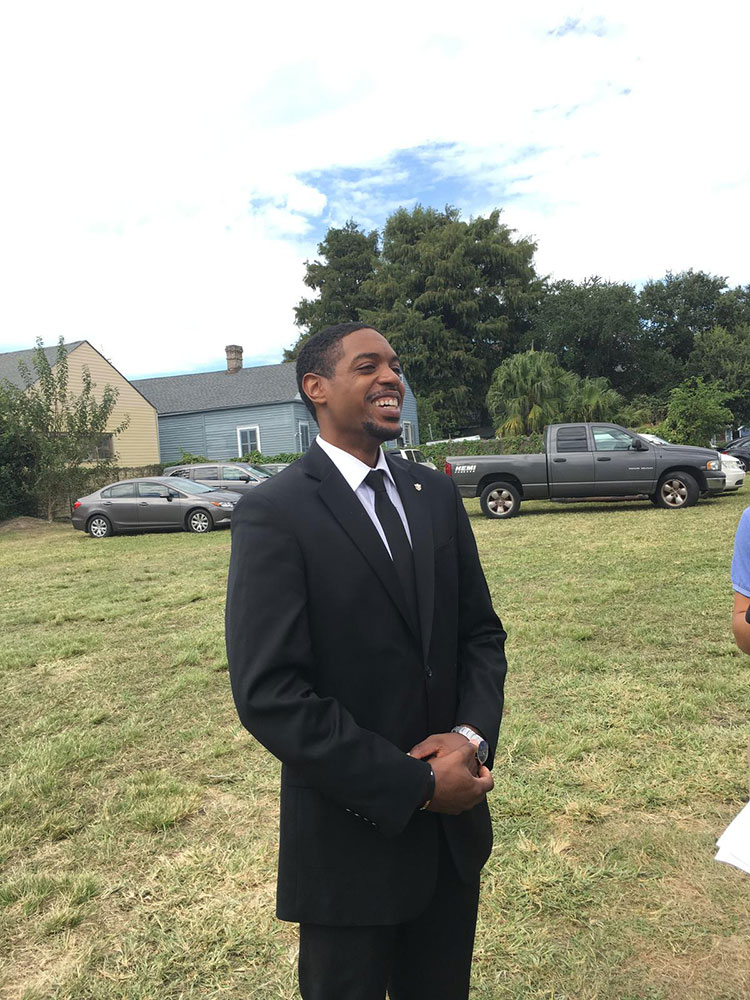 “I feel like I was born in the church—first thing I saw, you know? Plus the proof of my mom’s pictures was the St. Augustine Church. So it’s all in my life. I can last an eternity at this church.”

What makes mass so special to Danzal?

“The jazz! The uplifting music, the congregation, the community, the members, the connection that we have with our members as well as with our new members, you know, it’s a bond, it’s a unity inside of St. Augustine Church. We accept all, and that is exciting to me each Sunday.”

And the church has excited enough other people to keep going for 175 years.

But, 175 years is a long time. And we found out the church wasn’t integrated that whole time.

“The church is put up in 1841,” he says. “At the time, the church is pretty interracial. Back in the 1840s, what the Catholic Church used to do was they sold pews, so you would get a pew that was specifically for you and your parishioners, and by the time you get to the 1850s, 1860s, about half of the pews are purchased by local, what today we would call Afro-Creoles, people of African descent who are French-speaking and French-educated.”

The St. Augustine Church welcomed everyone, despite the color of their skin. Other Catholic churches at the time were integrated, but white people had founded them. What’s different about St. Augustine is that it was founded by white and free people of color together. But in the first half of the 20th century, that integration stopped. Starting in 1920, the black members had to go to a different church in the neighborhood, called St. Peter Claver. St. Augustine became an all white church.

These racial tensions of the segregation era affected St. Augustine, just as they affected the rest of southern society. During this time, black parishioners did not feel welcome. But Kodi says there were actually some positives that came from separate congregations.

But Kodi says that this period when black people were kicked out and forced into another church makes it hard for him to wholeheartedly celebrate St Augustine’s history.

“I’m a little cautious, because I know how troubled the racial history is at St. Augustine, how back and forth they’ve been. I guess I’m more skeptical than most folks might be when they see the anniversary celebrations, knowing that the church has had a history of having black parishioners and then pushing them out, and then black parishioners having to fight to keep their position in the community. I think that’s problematic.” 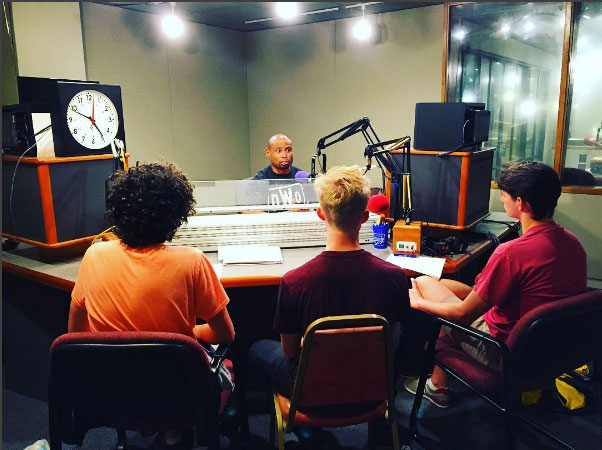 After the 1960s, St. Augustine Church became an all black church for a number of years, in part because a lot of white residents left the Treme after desegregation. (Plus it almost closed after Hurricane Katrina. But we’re not going into that for this story.) Back to Kodi’s point: there were benefits and drawbacks with both segregated and integrated congregations.

“St. Augustine is a good example of how that can succeed when it’s working and then, when it goes wrong, when you try to impose segregation on that kind of space, how badly it can go,” Kodi says. 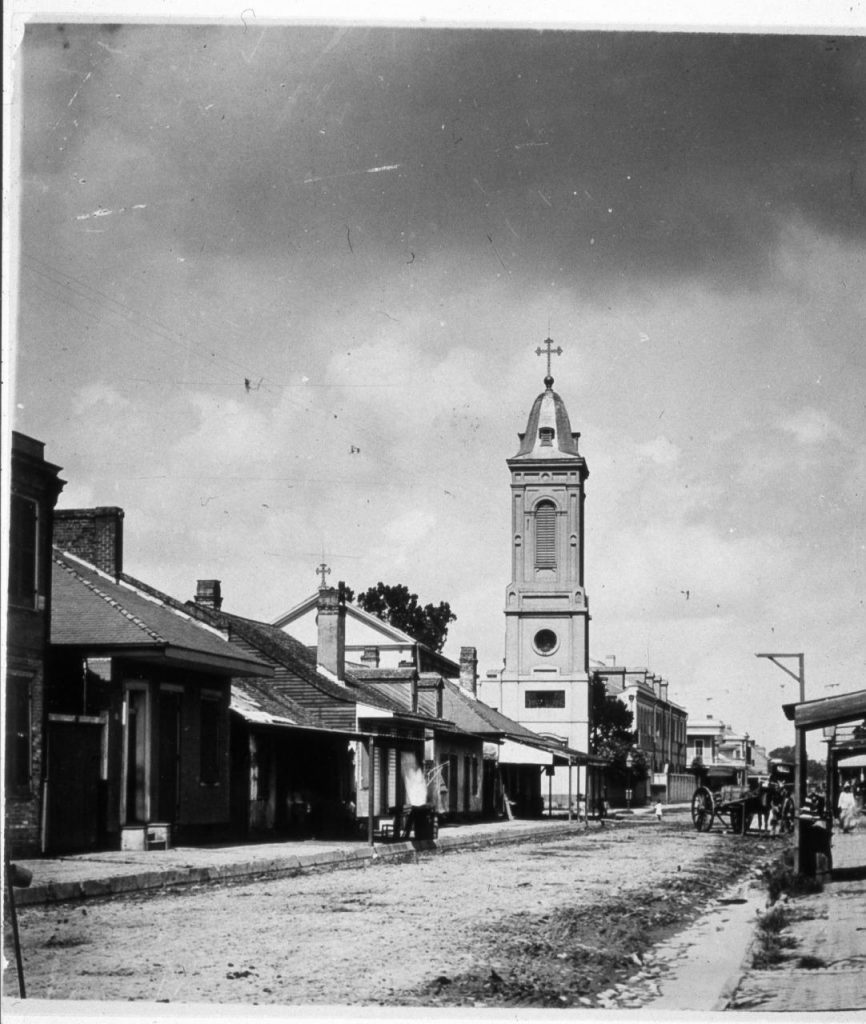 The steeple and bell tower of St. Augustine’s are shown along with a view looking at the 1100 and 1200 block of Gov. Nicholls in the Tremé neighborhood. There is a horse-drawn cart in the background and residences and cottages are visible.
CREDIT HISTORIC NEW ORLEANS COLLECTION

Today the Treme neighborhood is gentrifying. As new people move in, many of them white, Kodi hopes the church continues to reflect and serve the families that have been living in that neighborhood for generations.

“What I would encourage for the local community is to keep an eye on things that affect that community, and make sure that the church doesn’t lose a lot of its history, that you don’t lose this generation of parishioners who’ve been there for forever. Because it’s great to have folks coming and going all the time, keeping the neighborhood vibrant and dynamic, as long as it’s not at the exclusion of the people who are there already.”

This advice comes full circle to meet a point in Archbishop Aymond’s sermon that even the smallest of beginnings can thrive. “If you have the faith the size of a mustard seed,” he preached, “you can do great things for God.” Perhaps it was the size of a mustard seed when they started 175 years ago, but what has happened in this time has grown to be a great mustard tree.

He’s referring to a parable in the Bible about the mustard seed. Mustard seeds are tiny, but this story says great works of faith can come from something that small, such as one single church.

“Do you know that the mustard tree can grow to over 20 feet tall?” Aymond went on. “May I suggest that St. Augustine parish is a mustard tree that is 21 feet tall.”

TriPod is a production of WWNO New Orleans public radio in collaboration with the Historic New Orleans Collection and the University of New Orleans Midlo Center for New Orleans studies. Special thanks to Evan Christopher for the opening theme music. Catch TriPod on the air Thursdays during Morning Edition and again on Mondays during All Things Considered. You can hear TriPod anytime, anywhere by subscribing to the podcast on iTunes, and give the show a review! Tripod is also on facebook, Instagram and Twitter at@tripodnola.

Coverglass and matt bound together with black paper tape. View looking along the 1200 block of Governor Nicholls Street in Treme, with the church visible in midview. THE HISTORIC NEW ORLEANS COLLECTION, GIFT OF MRS. JOY SEGURA, ACC. NO. 2004.0096.68
Back
Episodes by Category