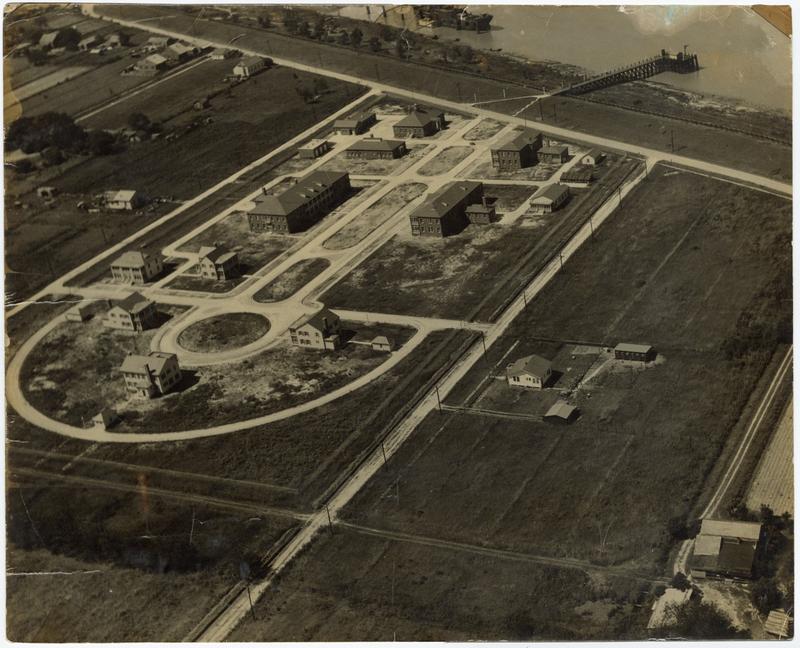 TriPod New Orleans at 300 returns with Part I of a two-part series about a World War II era internment camp in Algiers that held those suspicious of affiliations with Axis powers. Listen to Part II here.

When we asked to be let in to the facility, we were told to call Agent Robert Rivet and schedule an appointment. Rivet didn’t even know about the chapter Marilyn is researching. He only knew about an even earlier use of the compound.

“We’ve always been told here that the facility was used as an embarkation facility,” says Rivet. “The immigrant ships would come up the river and pull over dockside. And the inspectors would go out and look for diseases on board the vessels and all for quarantine purposes.”

This is how the compound was used in the 1800s. But what about World War II?

“As far as some sort of camp?” He asks. “I’ve never heard that story.”

Not many people have. When people think of WWII internment camps they think of the Japanese Americans detained after Pearl Harbor. More than 100,000 people of Japanese descent were detained after that attack, the majority of them U.S. citizens. The Camp Algiers story is part of a much smaller government internment program, often overlooked, but now the subject of research by Miller.

“All these buildings would have been part of a facility that was used in the 1940s,” she says, looking at the facility from the facing levee, “to house enemy aliens who arrived in New Orleans from Latin America.” 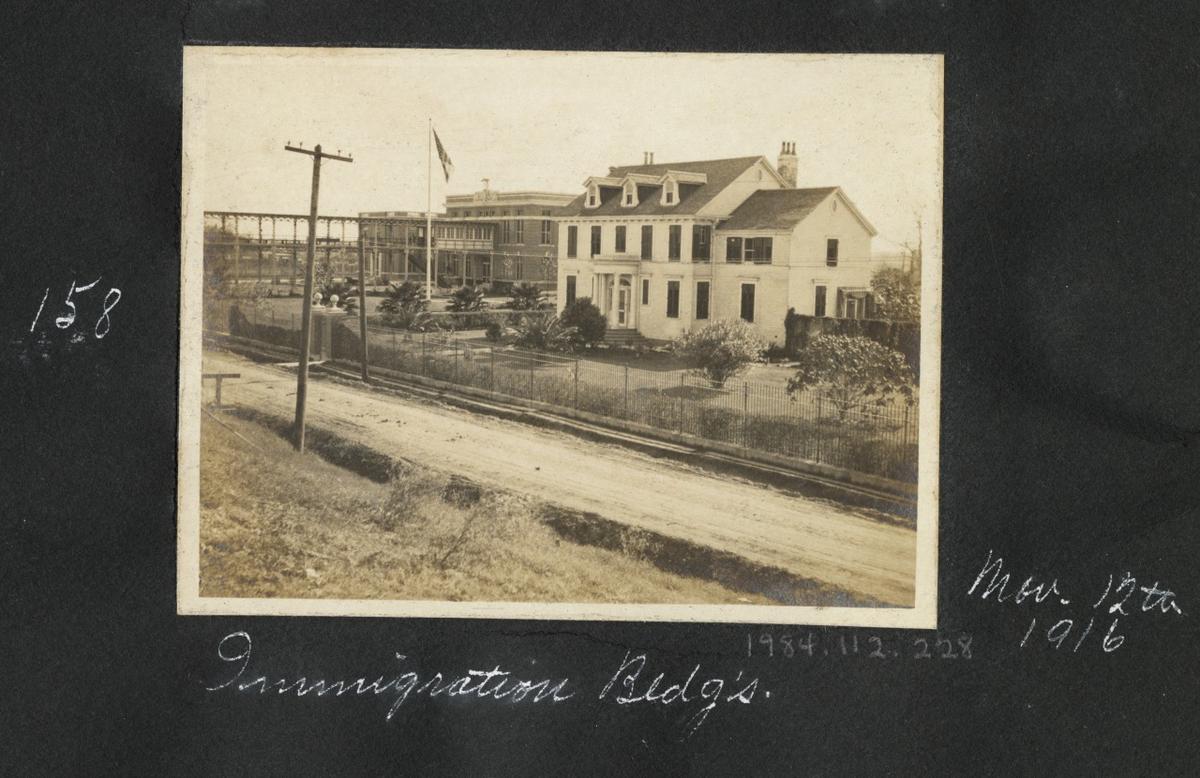 Let’s start on Dec 7, 1941—the Pearl Harbor attack. The FDR administration had become increasingly concerned that, in addition to Western Europe and Japan, there might be a third Axis front: Latin America.

More than a million and half Germans lived in Latin America, says Max Paul Friedman, a history professor at American University and an expert on the Latin American deportation operation during WWII.

“Some of them might be Nazi agitators and even saboteurs and spies,” he says, “who could conceivably rise up and overthrow governments and open up another front.”

And what they did was what you would imagine.

They’d “open wallets and offer to pay for information for anybody who would denounce a Nazi. And that created a system that was riven with corruption, where some of the Latin American dictators would say ‘oh you want Nazis? Well this guy who owns a farm next to my farm, he’s a Nazi,’ and they would deport some of their own residents to seize their property.”

It sounds crazy—the U.S. government sending D-string FBI agents to find Nazis in Latin America, kidnap them, and bring them to America? But it’s true. Just days after Pearl Harbor, thousands of Europeans who had moved to Latin America were rounded up and eventually deported to New Orleans.

The secretive program, called the Enemy Alien Control Program, was run by the State Department and was in many ways illegal. It was against the law at that time for the United States to seize individuals outside the country.

So, the State Department decided they would get around this by refusing to issue entry visas for the Latin American deportees. When the Latin American residents arrived to the port of New Orleans without papers, they were denied visas. Then, they were arrested on the grounds that they had attempted to enter the country illegally and were subject to internment.

Nancy Cortés Reinbold lives in Honduras. As she was researching her family history, she came across these camps. Her grandfather came up on the list: Mr. Fritz Reinbold.

Nancy’s grandpa Fritz was born in Germany but left before the war to live in Honduras, where he met and married her grandma.

“He said that it was probably because he was rich,” she says, noting the reason someone would falsely identify him as a Nazi. “That was his only mistake.”

Fritz worked at the German Embassy. He’s one example of someone who was framed as a Nazi, so that he would be forced to give up his property and assets to the Honduran government. He and his family were put on a ship to New Orleans in 1943.

Nancy’s mother was 11 months old. “I don’t know how many days or weeks they spent there,” she says. “But New Orleans was the point of delivery.”

Most Latin American internees first arrived in New Orleans and were then shipped off to one of the other camps. Her family was put on a train to Crystal City, Texas.

“My grandfather never in his life talked about this,” Nancy says. “This is unforgivable; I cannot imagine how they felt. They took away everything.”

She knew her mom spent a few years in Texas but never knew why. She discovered her family’s experience on the German American Internee Coalition website and saw that they were among 5,000 Europeans with a similar story.

“Not only were many of these people rounded up between 1941 and 1943 innocent, they were the victims,” says Harvey Strum, a faculty member at the Sage College of Albany. “Approximately 81 Jews in various countries were rounded up,” he says.

So, in the search for Nazis, the United States deported and interned Jews?

Marilyn Miller continues. “The great irony is that of these aliens, some small percentage of them were European Jews who had gone to Latin America when they were denied a visa to enter the United States for refuge. At least five had already been in concentration camps in Europe.”

Imagine you amazingly manage escape from a concentration camp, try to enter the United States, are denied entry, so you go to Latin America instead, and are kidnapped and sent to the United States, once again to live behind barbed wire and face harassment and even beatings “at the hands of real Nazis in the [U.S.] camps,” says Max Paul Friedman.

Because of the faulty accusations of so many deportees, a majority had no affiliation with the Nazi party. But there were still a good number of Nazi sympathizers who were also sent to the camps. And they were pretty much allowed to do whatever they wanted, says Miller.

This led to severe discrimination and beatings of Jews in the camps. The Jewish detainees in various camps across Oklahoma, Texas, and Georgia demanded they have their own camp, a safe space where they wouldn’t need to share a bunk bed with a literal Nazi.

There was additional pressure on the camps to do something, because the National Refugee Service, and various Jewish organizations got wind of what was happening and supported the demand that the Jews be moved.

Max Paul Friedman says it also helped that camp administrators were starting to see the absurdity of the situation. “Camp commanders started writing to Washington saying, I thought we were going to be housing and guarding dangerous Nazis but you’re sending us whole families and old men and Spanish speakers and children, and we don’t understand,” he says.

So officials decided that one of the camps would be used specifically to house those who opposed the Nazis. This is where Camp Algiers comes in—what’s now the U.S. Border Patrol facility on the West Bank. Miller explains.

“When there were problems in other camps, we have news stories from the Jewish Telegraphic Service that say, ‘Nazis and Jews fight in Camp X…’ and as a result of that, many times the Jews were sent to the Algiers facility as a refuge from this fighting. So Camp Algiers became known as the camp for the innocents.”

Starting in 1942, most of the 81 Jews and other innocent prisoners held in camps from Texas to Oklahoma were relocated to New Orleans.

Find out what life was like in Camp Algiers in Part II of this series.