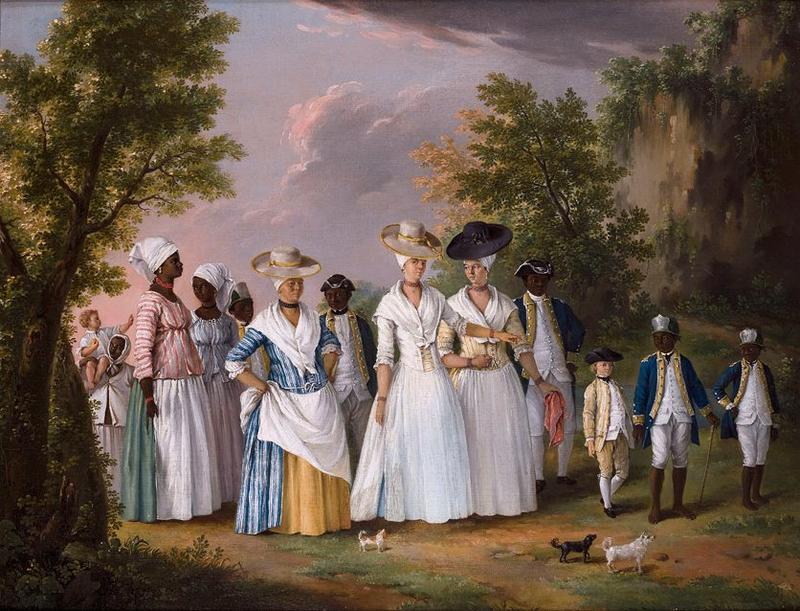 There is a common myth told about 19th-century New Orleans. It goes something like this: Imagine you’re in an elegant dance hall in New Orleans in the early 1800s. Looking around, you see a large group of white men and free women of color, who were at the time called quadroons, meaning they supposedly had ¼ African ancestry. The mothers play matchmakers, and introduce their daughters to these white men, who then ask for their hand in a dance.

The ballroom is fancy, and the invited guests look the part. When a match is made, a contract is drawn up. The white man agrees to take care of the young woman and any children she may have with him. This arrangement was called plaçage.

Charles Chamberlain teaches history at the University of New Orleans. “Plaçage is defined historically as a white man basically having a relationship with a free woman of color, where she would be kept—he would provide her with a house and some form of income so that she could maintain a lifestyle.”

What Chamberlain is describing is basically a common-law marriage. And those did happen. But the idea of quadroon balls is way sexier, which helps explain why they get talked about so much. French Quarter tour guides walk by the Bourbon Orleans hotel and talk about the famous quadroon balls that took place inside. But try to find proof of plaçage, Chamberlain says, and it’s not there.

“I don’t believe that any plaçage contracts have ever been found or uncovered by historians. And so this is part of a legend that historians who have studied it have a hard time actually validating.”

But what about the balls where these arrangements were made, these famous quadroon balls? They had to exist…right?

“Well I don’t think there’s any evidence that speaks to that,” exclaims Chamberlain.

Emily Clark is a professor of American colonial history at Tulane University. She says the ball is just part of the myth and concurs that there’s no evidence suggesting that the balls, so often described, ever happened regularly or that formal plaçage agreements existed. She calls this myth the plaçage complex. 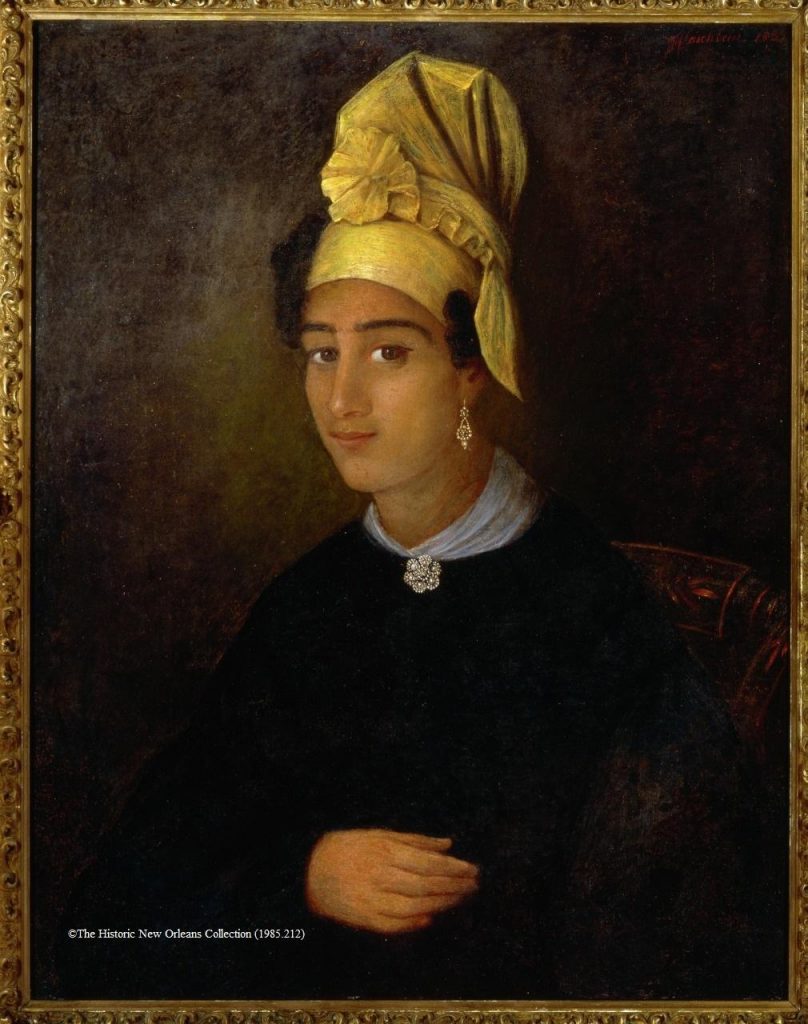 Bust-length view of a free woman of color. She is shown in three-quarter view facing left and set against a dark ground. She wears a yellow headdress and plain black dress. She wears a circular pin inset with stones pinned at the neckline, and drop pendant earrings, also inset with stones. Her right hand is held across her torso. (1985.212)
CREDIT HISTORIC NEW ORLEANS COLLECTION

“So here’s the myth,” Clark lays it out. “The myth is that New Orleans is full of beautiful mixed race women, free. And so their mothers would shop them out to these wealthy white men. And the mothers would get the white man to do a contract saying, I’m going to set her up in a nice little house on Rampart Street, and I’m going to provide for her and any children born of the relationship. So the mother would draw up this contract and basically sell her daughter off. And then invariably the young woman always thought that he would stay with her, he would be true, but he didn’t. He invariably left her to marry a white woman.”

There are a lot of stereotypes perpetuated in this myth—the over sexualization of women of African descent, a lack of strong nuclear families among free people of color. And the sad thing, Clark says, is that it just keeps getting repeated. It won’t go away.

Barbara Trevigne is a native New Orleanian and a Creole. Her family goes back to pre-colonial Louisiana. She decided to research her family history and free women of color ancestors, and she discovered that one of her ancestors was one of the first women of color to own property in Treme. The Treme and French Quarter were where most free women of color lived and owned property.

In her digging, Trevigne only found one documented instance of a quadroon ball, which took place in 1805. Not only that, but when she looked into plaçage, she found the relationships were not so visitation based. “I’ll make it very, very easy,” she says. “You visit your mistress. You live with the person you consider your wife.”

These interracial couples couldn’t legally marry, but they lived under one roof. Trevige discovered this by going into the archives. “I dug in the archive repositories—the dusty, moldy records. I developed sinus infections, vision problems. And I realized that the truth was much more fascinating than anything anybody could dream up.”

So if quadroon balls rarely happened, where did these men and women meet? Emily Clark found these answers in the same place that Trevigne did—in the historical archives.

“Free women of color were the most pious people in New Orleans in the colonial period. They’re the ones who are filling St Louis Cathedral, literally filling it. But we don’t know that story about them. We know instead the story about quadroon balls and plaçage and all that.” 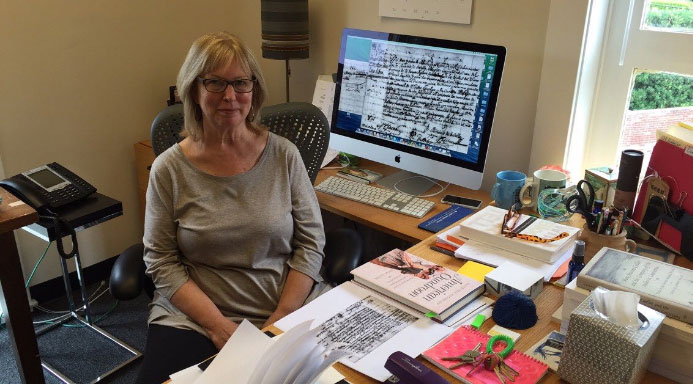 Here’s where it gets a little tricky. Plaçage isn’t all legend. The origin of this is surprising: the Haitian Revolution. Thousands of Haitian refugees fled to New Orleans in the very early 1800s, almost doubling the population of the city.

“And if you look anywhere in the world today where there are refugees,” Clark says, “we know what happens to those women and children and especially to the women who come with nothing. They are looking for security anywhere they can find it. And so for a brief, really tragic moment in this city’s history, there were a lot of free women of color who were available for short-term relationships and maybe even for prostitution. What I think is really important is to recognize that it was time limited, but it created a reputation for the city.”

Clark says, if there were anything like quadroon balls, they were parties marketed to sailors and visitors looking for a one night stand, not a long term relationship. They were a seedy tourist attraction. This is similar to how many people who live in New Orleans are going and buying shots off of shot girls on Bourbon Street…not many. 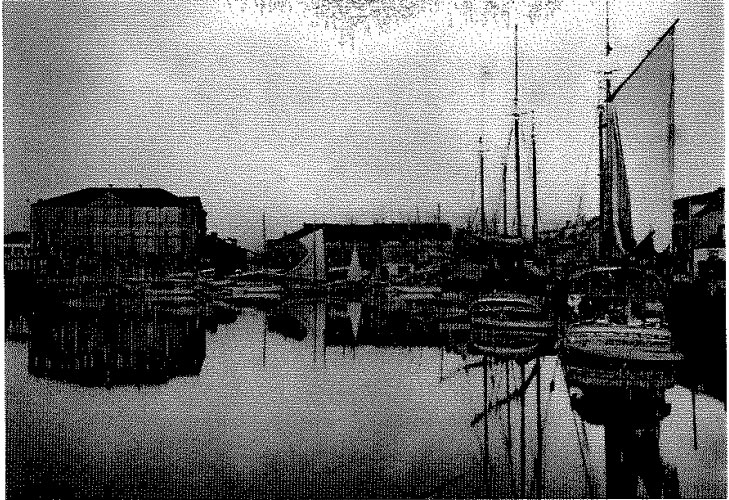 The Globe Ballroom was on the edge of the city on the Basin, convenient to sailors and dockworkers. The Globe was the site of any quadroon balls that happened in the city in the 19th Century.
CREDIT HISTORIC NEW ORLEANS COLLECTION

The eye popping legend overshadows the real lives of free women of color who married free men of color, the women who had lifelong relationships with white men, the women who were devout Catholics and highly powerful property owners. Just look at the city’s earliest census reports, says Barbara Trevigne.

“So when you see the census, you see that it is dotted all over in the French Quarter, because these women were entrepreneurs, and they purchased their freedom. And they were able to purchase a home, and they reared their children.”

Clark says the fact that we’ve believed this plaçage myth for so long shines a light on a disturbing bias in American society. 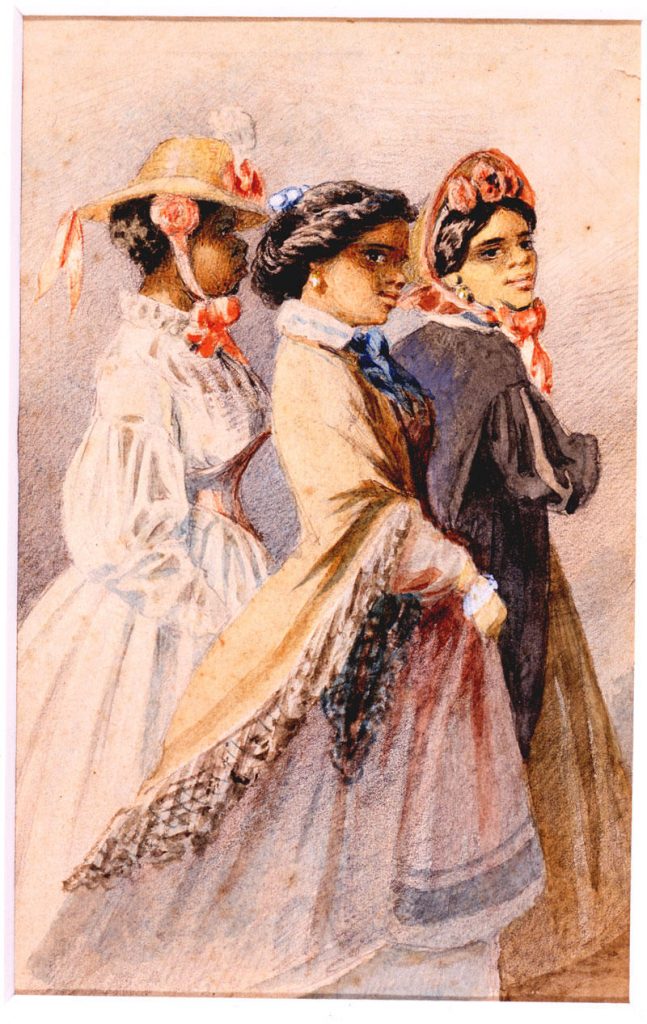 “We rob them of having attained the ideal of being a lady when we erase their story and instead accept what was the story told about all black women which was that it’s not the white man’s fault that they go to bed with black women, and even that they rape them. It’s the woman’s fault because they are so seductive. It’s what they want. So it’s that old story that’s told, you know? It’s in the news right now. It’s always the woman’s fault. Well, it wasn’t the woman’s fault. So when we buy this myth, we’re buying into that really old and I think socially destructive and just plain not historically accurate idea about women of African descent.”

She says white women in the 19th Century frankly didn’t want to believe their brothers, sons, and even husbands could be in love with a black woman. So they were inclined to believe and spread this myth, too—that it was purely sexual. But Trevigne says not only is that ridiculous, that it was just about sex, but, she asks, can you imagine hundreds of pious, upper middle class families participating in a system like that? That free women of colors’ parents would have allowed them to go to a ball, sign a contract, and then when the white man would decide to get married to a white woman…

“His poor daughter would be left alone, and he would go about his way with his new family?” Trevigne asks. “I don’t think so. Right?!”

TriPod is a production of WWNO New Orleans Public Radio in collaboration with the Historic New Orleans Collection and the Midlo Center for New Orleans studies at UNO.

English: Free Women of Color with their Children and Servants in a Landscape, oil on canvas painting by Agostino Brunias, ca. 1764-1796 AGOSTINO BRUNIAS / ARTDAILY.ORG
Back
Episodes by Category